You know what I like best about Rocco's Dinner Party? It's only an hour long. Compared to the 90 minutes of torture that is Food Network Star, an hour of Rocco and Friends really isn't bad at all. (Did I just type that out loud?) And he didn't seem half as douchey this week as he did in the past two shows. Not only that, either the Botox has worn off, or I'm getting used to his face, because he doesn't look weird to me anymore.

This week's chefpetitors are the extremely Italian, cute-in-a-disheveled-way-and-maybe-smelly Carro brothers, whom you may or may not recognize from Iron Chef America (the episode was broadcast last weekend, btw), plus an Armenian caterer from New Joisey named Ninamarie Bojekian. Ninamarie is somewhat surprised that the two men who make up her competition bear a strong resemblance to each other. Like they were twins or something. 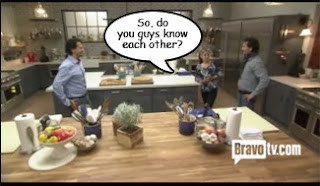 Which of course they are.

Once they're settled in the kitchen, Rocco comes in to give them their first challenge, in which they must create their signature dish so he can get the pleasure of ripping each of them a new one.

The fratelli are a beet competitive. 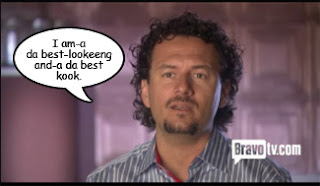 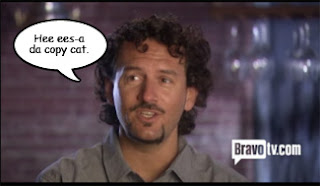 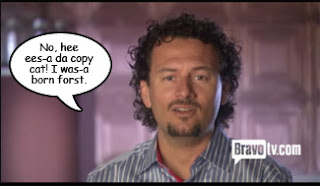 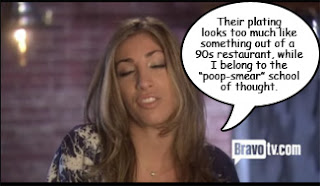 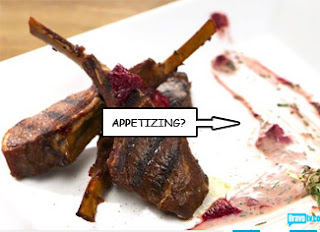 Time's up and the chefpetitors, clenching their buttocks, take their dishes to the Altar of Judgement. Rocco's critiques actually seem somewhat warranted and much less-snarky this week. Nicola's dish is too full of strong flavors - the BLAH and the a-blahblah compete with the gobble di. Ninamarie's smoked lamb is a bit over-cooked for Rocco's tastes, but he is extremely impressed with her dish overall. Rocco then praises the composition of Fab's dish (take that, Ninamarie!) before taking him to task on his nearly-raw lamb chops. Ultimately, the elements of Nicola's dish were at war with each other, and he was sent packing - much to the shock and dismay of his brother. Ninamarie was chosen as the winner of the challenge and given first choice of dining room and serving time.

Rocco then claps his hands, summoning party planner Jes Gordon. After he compliments her on her dress, and she returns the compliment on his suit, I am disappointed that nobody compliments her on her giant forehead. The theme of this week's dinner party is - wait for eet - Italy. We first see Jes consult with Ninamarie who has chosen to use the Formal Dining Room. She's not Italian, nor has she been to Italy, so she wants to go with what she knows: New York's Little Italy and the over-the-top famiglia/paisan/meatball quality of its restaurants. Fabrizio, on the other hand, knows Italian, and wants the guests to imagine themselves not in the Terrace Dining Room but in the Italian countryside. 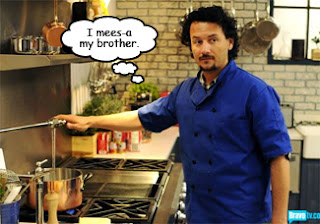 The chefs meet in the kitchen the next day to battle it out. Fab tells Nina that if she wins, he will switch to cooking Japanese food for the rest of his life. 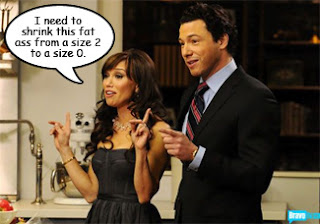 Sara is on a diet and is not eating carbs, so she asks the chefpetitors to go easy on the pasta for her.

The guests head into Ninamarie's room, which is a tacky nightmare, complete with neon signs that read "eat!" and "mama" and a giant replica street sign that takes up much of one wall. And then comes the food.

Ninamarie starts off the party with a lemon-infused prosecco martini and a fancy selection of home-made antipasti including zucchini bread, eggplant caponata, roasted peppers, and asparagus. This is followed by a pasta course of chopped chicken scarparelli and cockles and mussels served with Israeli couscous. Sara throws up her little hands and wonders what she can eat; Rocco helpfully points out that she can pick out the chicken and mussels from the pasta dishes. 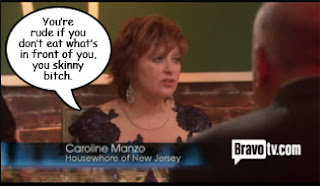 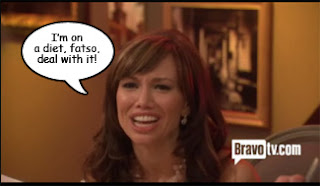 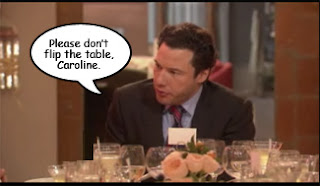 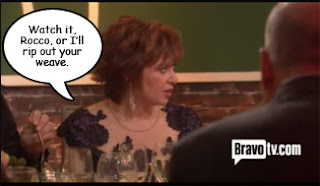 Ninamarie's  meat course is veal Milanese served with the unusual accompaniment of peaches, and dessert is a fairly simple mix of basil-infused fruit with creme fraiche. Sara decides that she can eat both the peaches and the fruit, seemingly not understanding that sugar = carbohydrates. She's not pretty enough to be that stupid.

Rocco takes the forks out of everybody's hands and shoos the group to the next party, where Jes Gordon has festooned the room with bunches of dusty-looking and obviously-plastic grapes (because Tuscany is full of plastic grapes), pampas grass, and astroturf. The guests ooh and ahh and say they feel like they're in Italy and all that sort of stupid shit. Not a one of those bitches is honest, like I would be, and point out the tacky factor. Another reason why *I'd* never be invited to one of Rocco's parties. 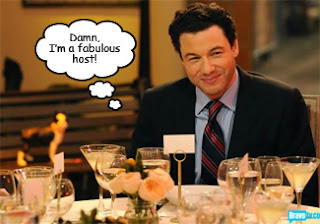 Fab serves a negroni and aperol spritz to start, with a mostly store-bought antipasti selection of Italian cured meats, plus caponata, and eggplant Parmesan. While one guest complains that Fab didn't actually make much of the food, Caroline defends his choice by saying that the selection comprises "traditional Italian antibas'." Hey, Caroline - want to buy a syllable?

Fab also presents a plate of his homemade polpettine, with breadcrumbs for the table, without for Sara. Rocco is surprised at his audacity, because everyone knows that his Mama Nicolina makes the best meatballs in the world! (Yeah, we made them once. They were just...meatballs.)

Fab's pasta course is a lasagna with bechamel and home-made pasta. He also makes a carb-free version for Sara, substituting zucchini for the pasta. The general consensus is that it would be wonderful if it weren't so disappointingly bland, and that Sara's version was probably the tastier of the two. He also serves a bland fish course of branzino and potatoes in an acqua pazza (crazy water, and no, that doesn't mean it came from the East River). Finally, his dessert is a panna cotta al caffé, which is delicious, but according to Silvano, is "not a real panna cotta but a mousse served in a cup." Ouch. Take that, Fab! 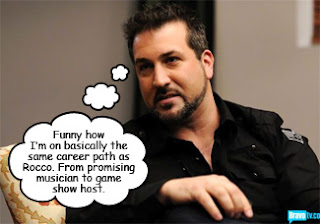 Meanwhile, several times during the course of the hour, we're treated to commercials for Phantom Fireworks starring none other than Joey FatOne. Because his career is even more completely in the toilet than Rocco's.

Back in the kitchen, Nina is tired and Fab is afraid to think that he has won. "The last time I thought I was wonning, I lost." But not to worry - despite his bland food, Fab is declared the winner. It's got to be for one of two reasons: 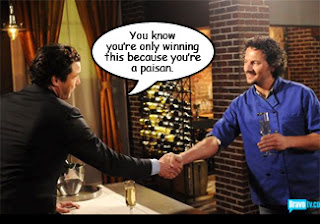 1) Fab is Italian. 2) Fab made extra dishes for that dieting bitch, while Ninamarie basically ignored the request.