Welcome to another exciting season of The Next Food Network Star! Yeah, I don't know why they got rid of the word "next." "Star" is the real lie here, since only one winner ever went on to fame and glory, such as it is. (And that would be...the douche who wears his sunglasses on the back of his head.)

This first episode was an excruciating two hours long and featured fifteen Wanna-bes. Fifteen. That means the show will last pretty much the whole damn summer, as if living in humid Baltimore isn't punishment enough for me. Sigh. It's pretty hard to get a grasp on the talents (or not, as the case may be) of fifteen people in the first episode, so I may not mention some of them at all.

It's good to note that most of the fifteen have some professional culinary experience - several are actual chefs and restaurateurs. One, however, is a radio personality who wants to transition to being a television personality. Unfortunately, cooking isn't his strong suit. Plus, the guy has a face for radio. 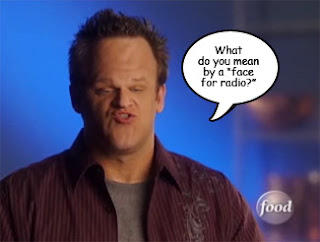 On to the episode. The Wanna-bes congregate in front of Grauman's Chinese Theatre in Hollywood, perhaps dreaming of the day they'll have their hand- and foot-prints embedded in the sidewalk to collect spit puddles and old gum wads, just like Marilyn Monroe, Judy Garland, and Darth Vadar. And then something scary happens - Bobby Flay and Giada DeLaurentiis pop out of the theatre, where they obviously have not been making out in the balcony.

Bobby tells the Wanna-bes that for their very first challenge they have to create a sophisticated signature breakfast. I'm hoping they have to do this on the sidewalk, maybe on hot dog carts, but no - cars arrive to whisk them back to the Star Kitchens, where they have 45 minutes to cook.

Not surprisingly, the scene in the kitchen is a giant clusterfuck, what with fifteen people running around, each unfamiliar with the place, the supplies, and the equipment. One of the characters who I immediately disliked because he thinks everything is "awesome," Frat boy Chris, attempts to roast a chicken, which of course turns out raw. Vic Vegas, a tatted-up Vin Diesel clone who either has a lot of facial piercings or is just unfortunately mole-y, is making a lobster slider, somehow loses his lobster, and doesn't get it to the plates on time. 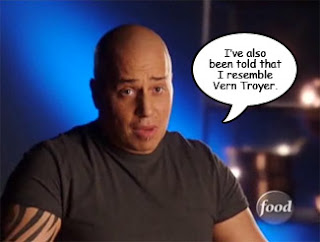 When time is called, the Wanna-bes find out they have to present their dishes to the camera while the judges taste their food. I am pleasantly surprised that, for the most part, this season's contestants are fairly good on camera. With a few notable exceptions, of course. Poor Mary Beth, who reminds me a bit of SNLer Nora Dunn, is told that she is "mediocre;" Alicia is told that she has a weird accent like a Valley Girl even though she's from Missourah; Juba was beyond awkward. Orchid, who is "radiant" in front of the camera, and cooks well, too, ends up on the top of the heap for this challenge.

The competitors are then sent home to their expensive digs with a view of the Hollywood sign. And bunk beds. 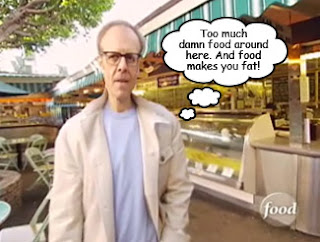 The next day, the Wanna-bes meet the skeletal remains of Alton Brown at the Farmers' Market where they break up into 5 teams of three to shoot three-part promos in only four takes. The teamage:

Predictably, there's at least one fuck-up in every trio who causes Alton to roll his eyes and call, "CUT!" and makes the whole process painful to watch. Justin B especially, since he starts out ok, then freezes like the proverbial deer in the headlights. He reminds me of a cartoon monkey for some reason. Also, he wears ear spools. When I see ear spools, I just want to hook my index fingers in them and pull down really hard. They seem made for that, don't they? Plus - they're ugly. 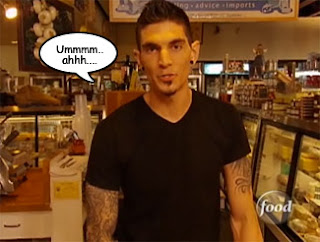 While I'm being critical about physical appearances here, it seems like most of the guys (Curious George and Juba excepted) have small heads and giant torsos. Did you see that too, or is it just my new HD TV? 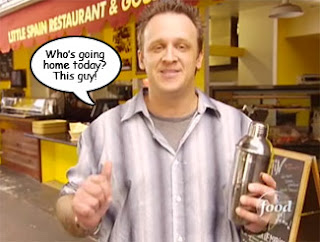 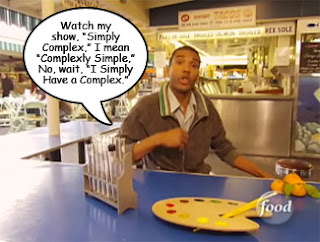 After that painful exercise is over, Alton tells the gang that they will be staying in their teams in order to produce a four-course tasting menu for a panel of "press." Each Wanna-be will be responsible for his or her own dish, plus there will be a fourth team-effort dish. There will be $200 for shopping, two hours for cooking at the Star Kitchen, and 30 minutes to finish the dish at the final venue, STK restaurant, where the promos will be rolled out to further embarrass the contestants.

Cut to scenes of Wanna-bes in the kitchen, scurrying, cooking, and bad-mouthing each other.

Team 5 serves their meal first. Penny - who declared she was Middle Eastern twice in the first 10 minutes of the show (she must be this season's Debbie "I'm Korean" Lee) - tells the assembled Selection Committee plus "press" Mario Lopez, Hal Rubenstein, and Jess Cagle, that she's bringing sexy back to the kitchen. Which means of course that she's a huge Justin Timberlake fan. During the presentation of her dish, she mentions the word "sexy" a few times, plus, "sexual," "intimate," and "ejaculate." (Ok, maybe not ejaculate.)

While she no doubt thinks she's hot stuff, Penny reminds me of Gene Simmons, but with bigger tits.

I didn't bother taking notes for Team 1, so they must have fared ok. Team 2 goes next. Jyll was too busy helping complete loser Radioface do *everything* in the kitchen and didn't have enough time to plate her own dish. To make things worse, while flailing about, she has a physical collision with Vic, knocking all of his food onto the floor. Howie's dish of gnocchi, described by Jess Cagle as reminiscent of something he made as a kid using glue and lemonaid, is the only one that makes it to the table, along with a group salad. 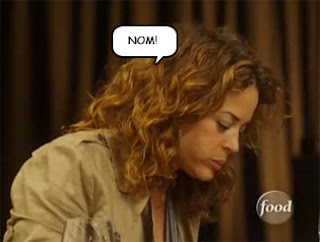 Team 3 and 4 were in the middle of the pack so I'm not going to go into their dishes or presentation. By that point in the show, I was way tired of taking notes anyway. 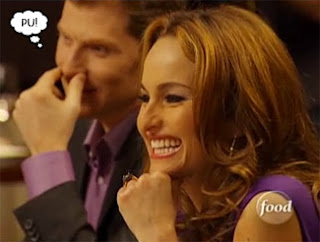 We're coming down to the home stretch here people, I promise.

Next we see all 15 Wanna-bes in the Room of Judgement with the Selection Committee. They call up the team of Juba, Jeff, and Orchid and say mostly nice things. Except Bride of Fogelstein, who has to put in her two cents. 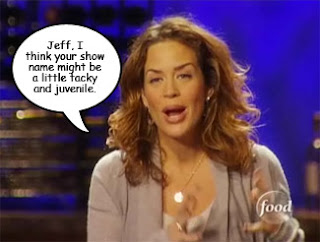 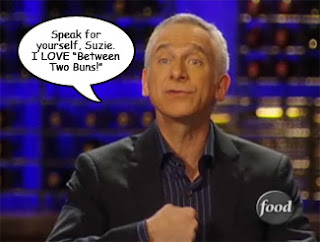 Middle of the road teams Mary Beth/Whitney/Justin B and Chris/Susie/Katy are sent back to the green room next, leaving the two teams that performed the worst in this challenge. Vic, Jyll, and Howie were the obvious losers in this contest, considering how little food made it to the judges. But Radioface Howie was the biggest loser of them all. Not only was his dish bad, but after Jyll tells the committee that she spent a lot of time helping him in the kitchen, they realize that he doesn't really have the cooking skills. Plus that face. Ugh.

Next week...? Someone gets eliminated after the Quickfire! I mean the Camera Challenge! Or whatever the #*%!@ it's called. Woo hoo!