I'm sorry, but I feel a rant coming on.

I've never been to either of Miss Shirley's brick-and mortar-locations for one main reason. Ok, two. They are most famous for their breakfasts, and we never go out for breakfast. And if we did, you'll never catch me paying $11 for two eggs, bacon, hash browns, and a biscuit. Or $7 for a bowl of oatmeal. Or $10 for 4 pancakes. I can make eggs, bacon, hash browns, biscuits, and pancakes at home for about $16 - for four people. Yes, the main reason we've never gone to Miss Shirley's is because it's too damn expensive.

Now Miss Shirley's has a food truck. And the offerings are, as expected, too damn expensive. The sandwiches cost $12 or more. For lunch. From a truck. If I'm going to pay that much for a turkey sandwich, I had better be sitting at a table while someone serves me, then cleans up after me. I'm just sayin'. (And for these privileges, at a Miss Shirley's restaurant, one is charged one cent less at $11.99. I'm seeing a clear lack of sense at work here.)

One of the benefits of a food truck, in my opinion and experience, is that they provide to the neighborhood (UMMS in particular) a variety of foods not already found in the local eateries, at pretty comparable prices. For example, the stellar grilled asparagus and goat cheese wrap offered by Souper Freak, the several varieties of tacos offered by the Gypsy Queen, and the addictive spicy chicken burritos from Curbside Café, are all things that can't be found in any of the many delis and sandwich shops in the neighborhood. I can get a 12oz "cup" of soup and a salad for $6 from Souper Freak, and that CC burrito, served in a bowl instead of wrapped in a tortilla (honestly, the tortilla muffles the gorgeous orange flavors in the chicken) for the same price. So why does a turkey sandwich from Miss Shirley's cost twice as much? Because it has brie and apples? Or are the turkeys organic, hand-massaged and spoon-fed by Miss Shirley's specially-trained turkey wranglers? 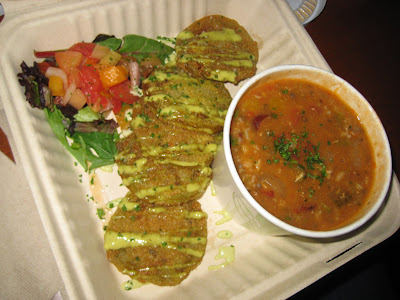 Anyhoo...there are a couple of things on the menu that are much less-expensive at $5 each, so I thought I should give them a try. (Of course that's relative, if you consider $5 for an order of sweet potato fries, which one can get for $2 from the Chowhound truck, or $5 for three slices of bacon, to be a reasonable price. Honestly - why would anyone just order three slices of bacon? To make their $12 turkey sandwich $17?) The fried green tomatoes are pretty good, drizzled with a lemon herb "aioli" (it's not an aioli, just a flavored mayo) and served with a "relish" (really a salsa with a touch of vinegar) of various colors of tomatoes and onion. They were still piping hot once I got them the two blocks back to my office, but they were slightly soggy. Sauce on the side would be nice. The presentation was lovely, but if that's what I'm paying for, I don't need it.

The gumbo was the standard chunky, light-colored soup that one tends to find outside of New Orleans (a.k.a."gumbo").With the addition of green beans and tomatoes, it seemed more like a marriage between gumbo and Maryland crab than the genuine article, with only the addition of andouille taking the flavor profile down towards the Gulf. There was a decent amount of seafood in my serving of soup, which again begs the question, why $12 for a turkey sandwich?

So the food that I was willing to shell out for was decent enough. And I have to give them props for their green packaging. The shell that held the tomatoes was even compostable. Not that many folks would be composting at work, or taking empty take-out containers home to recycle, but still - a nice thought.

Editor's Note, 9/8/11 - I checked out Miss Shirley's truck menu on Facebook today and it appears that prices have been lowered. Bacon is still $5, but the turkey sandwich has been marked down to $10 from $12. Still expensive, but slightly better.