The latest food truck to hit the University of Maryland Baltimore area is the Gypsy Queen Café, run by the fine folks who brought us the late Helen's Garden in Canton. If you watch the Food Network, you might, as I did, recognize Chefs Annemarie Langton and Tom Looney from their appearance on Chefs vs. City.

Mac and cheese topped with bacon "bling" in a waffle cone is probably one of the more outrageous lunches out there. The mac is rich and creamy, of the old-school American cheese variety, modernized by a chunky, onion-rich bacon jam. The waffle cone is...an actual waffle cone, ordinarily found sporting scoops of ice cream. Honestly, it works best if you just don't eat the cone. 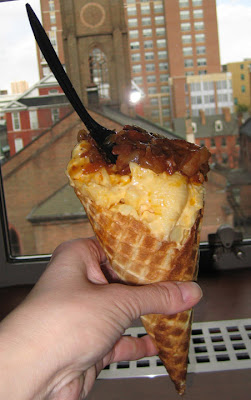 The truffle sliders feature three plump and juicy little beauties served on a toasted squishy bun with subtly truffle-flavored mushroom duxelles. While I might like more truffle flavor, I have to say the burgers themselves are pretty delish. 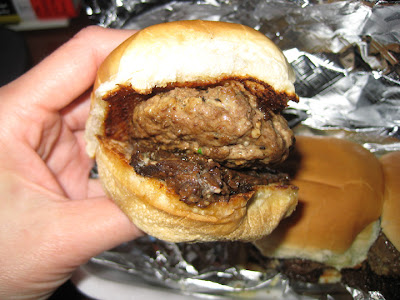 I also tried the black pepper chicken kabob, made from nicely peppered chicken breast with a slight sweetness, well-cooked, accompanied by a side of hash-brown-like potatoes. The dish also included a handful of undressed but otherwise slaw-like shredded cabbage and raw red and green onion.

The chai caramel donut - with bacon! - was of the "honey-dip" variety, coated with a spiced caramel sauce, bacon bits, and a dollop of whipped cream. Evil, but I think a cake donut would have worked better. 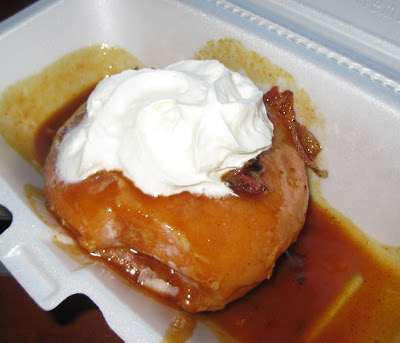 Prices are a bit high for lunch, and tax is not included, but if you like variety, and maybe even some weird stuff, check out Gypsy Queen Cafe when it rolls into your neighborhood.

ETA: Gypsy Queen is going taco crazy! The tacos al pastor, with Mexican chorizo and pineapple on a corn tortilla, are messy but delicious, as are their new Mission Bay fish tacos, with crisply breaded fish on a soft corn tortilla.