For the penultimate episode of the four-month-long Snoozefest 2011, aka Top Chef All-Stars, we have a heated fiery intense boring competition between three potential losers champions - Richard Blais, Antonia LoFaso, and Mike Isabella. Blais, who's been hating on his own self for the past several episodes, lets us know that Mike's successes in the past two challenges have started to bug him. 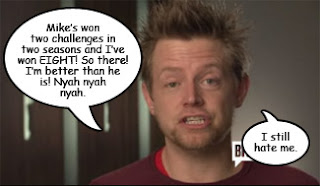 Blais gets me thinking, "that's right! In season 6, there were only four people who won any Elimination Challenges - Bryan, Jennifer, Kevin, and Mike...Voltaggio." So how the hell did Mike Isabella make it so far in this season, when his competition was as--or even more--tough than in season 6?

Because I dislike him so much. He's doing it for spite. Yeah, that's it. 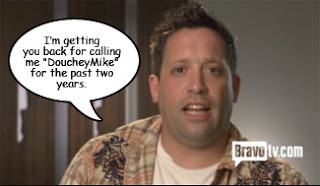 So, anyhoo, Padma meets the remaining recheftestants in the still-not-underwater Atlantis kitchen, accompanied by Wolfgang Puck. She tells DoucheyMike, Blais, and Antonia that this final Quickfire will be a reenactment of three of seven "classic" QFs from past seasons. DoucheyMike, as the winner of the last Elimination Challenge, gets to assign one of these challenges to a competitor, and he chooses that Antonia make a dish using only canned goods. Antonia then assigns a hot dog challenge to Blais, who in turn gives a one-pot meal challenge to DoucheyMike. 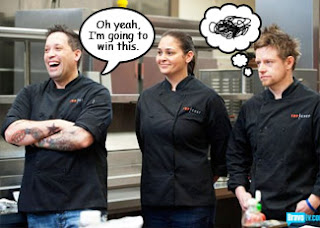 They have 45 minutes to prepare their dishes. Antonia says that Blais was dumb for giving DoucheyMike the one-pot challenge because that's basically freedom to do anything. 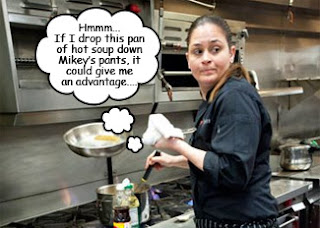 He chooses a pressure cooker as his one pot for a rendition of pork and beans. Antonia goes for a curried coconut soup. Blais decides to make the popular German snackfood, currywurst, plus homemade bread.

Just as everything seems to be running smoothly, Padma comes back in. Uh oh. Trouble. 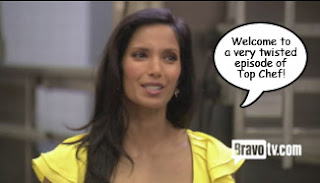 The chefs get to assign a twist to each other, and while they might like it to be a knife in the gut, that is not one of the options. Pity. Richard assigns "finish cooking with no knives or utensils" to DoucheyMike, Antonia assigns "cook with one hand" to Richard, and is left with the "cook with a partner, wearing a shared apron" scenario. And who does she get to share her apron with? 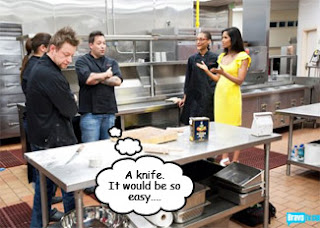 Hilarity ensues. Not really. DoucheyMike stands around because his food is in the pressure cooker and there's not much left for him to do. This annoys Antonia who has to open cans and brunoise vegetables with Carla as her left hand, and the one-handed Blais who has to wrestle limes with his teeth.

After Padma and Puck taste everything, DoucheyMike is chosen as the winner of the challenge, even though he made a salad to serve under the pork and beans and in my mind that is no longer a one-pot meal. He won $5000 from Terlato wines, and the other two (and I) got bitter. Blais starts to feel pressured. Me too. Honestly, because I want him to win so much, I am feeling Blais' stress and watch the rest of the episode through my fingers. 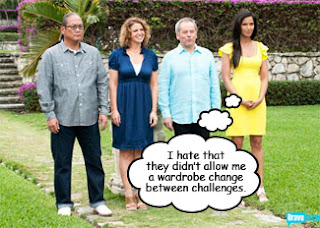 Later that day, for a change of scenery, the three meet Padma at the Cloisters at Ocean Club. She's brought some friends: Wolfgang Puck again, his shirt wrinkled as if he just took a nap in it, plus Iron Chef and all-around non-smiley guy Masaharu Morimoto, and the now-ubiquitous, Jewtino chef Michelle Bernstein. Aren't we sick of seeing this woman already? Does she have some special contract with Bravo that allows her to pop up just about every season? Can we banish her to Real Housewives of Miami?

Padma introduces these "Culinary Icons" and tells the cheftestants that they will be cooking their "last supper." Because DoucheyMike won the QF, he gets to choose his chef and assign the other two to his nemeses. He picks Bernstein (because he secretly has the hots for her), gives Morimoto to Antonia, and Puck to Blais. Padma then waves a little envelope in the air containing a twist "for later." Oh goody.

So the finalists chat with their Culinary Icons to find out what they want for dinner. Wolfgang fancies goulash, spaetzle, and apple strudel. He mentions apple strudel several times, emphasizing how much he loves it, and Blais is left wondering how he can make strudel dough with liquid nitrogen. Bernstein makes things easy for DoucheyMike and tells him she wants fried chicken and biscuits with gravy, because she comes from--wait for it--a Latin Jewish family. And finally, Morimoto tells Antonia about the deceptively simple lunch of miso soup, pickles, and sashimi that his mom prepared for him when he came home from playing baseball. Mom, apparently suffering from OCD, used to pick through the rice to make sure all the grains were the same size before she cooked them. No pressure, Antonia.

Back at the ranch, Antonia says that DoucheyMike has "given it to her twice today," which has kinda sickening and potentially incestuous implications. Yeah, you hate me for putting that in your head, don't you? Ha! 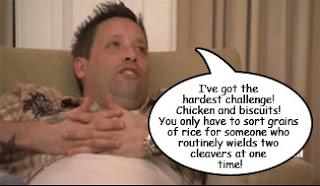 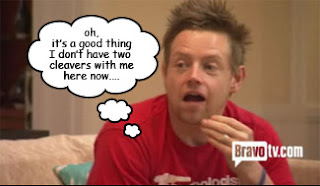 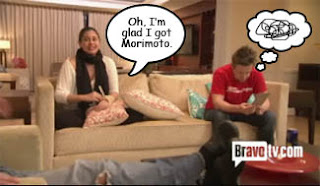 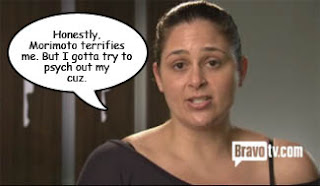 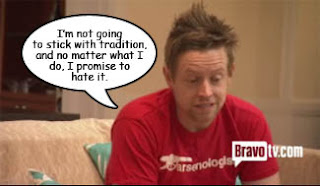 The next day, they have three hours to cook. Tom comes through and makes the chefs nervous, especially Blais, who he torments with DoucheyMike's recent success. 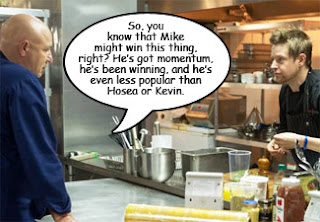 Antonia initially wants to make hamachi sashimi, however, when she unwraps her fish, she finds it to be nearly rancid. I'm thinking that fish wrapped in plastic and not bought fresh from a fishmonger is probably not sushi grade, but we never saw the chefs shop, and do not know where the ingredients came from. I'm guessing there are no Whole Foods in the Bahamas. She finds some less-flavorful tuna hanging around and uses that instead.

The show is only about half over when we see the judges and Culinary Icons arrive for their meal. I'm thinking, "yay! a special Undersized episode to make up for the damn Supersized ones we've had to endure!" With them is guest judge for the evening Melanie Dunea, author of My Last Supper: 50 Great Chefs and Their Final Meals, there for the sole purpose of shilling her book, because her presence is a big nothing otherwise. Especially with Culinary Icons sitting just across the table from her.

Antonia presents her meal for Morimoto first. Her miso soup is too salty and her tuna is too spicy, but her rice is perfect and everyone seems to enjoy the umpteen varieties of pickle she prepared. However, Japanese flavors are subtle, and hers are anything but.

DoucheyMike added some pea puree to his version of fried chicken with a egg-yolk-stuffed empanada and mustard gravy. His chicken is a bit dry, and the coating, while crisp, didn't adhere well to his sous vide-ed bird. Bernstein says the egg-and-empanada thing is interesting, but her mom used to try that all the time and she wouldn't go for it. 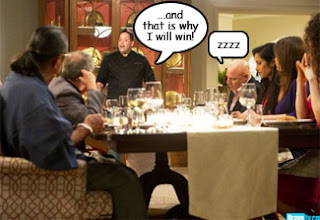 Blais is last. As soon as the ladies taste his food, there's a chorus of "mmmmm," which can only be a good thing. His spaetzle are a bit tough, but they rave about his strudel, and the fact that he added his special Blais-ian touches, but kept the integrity of the dishes intact.

After the chowing down is completed, Padma tells them that Judges' Table is starting right now and that Blais is going on to the final final finale. He breathes a sigh of relief as Padma pulls out the envelope she showed the day before, the one containing yet another twist, and hands it to Antonia 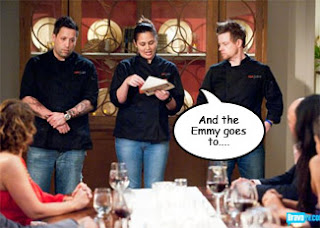 Apparently the judges are still hungry, because DoucheyMike and Antonia  have one more challenge to face before finding out who makes it to the final final finale. The two of them must prepare one perfect bite, in 45 minutes.

Antonia goes for seared grouper in a coconut lobster broth with a yam, apple, and dill pollen relish. DoucheyMike makes a surf-and-turf of tempura lobster over beef tartare with olive caramel and chimichurri sauce. Dunno - both seemed much bigger than a single bite, particularly since there was food left over in the judges bowls when they were done trying the dishes.

The judges are split 3-3, leaving Puck to choose the who will go on. And that is...DoucheyMike. Of course. Damn. 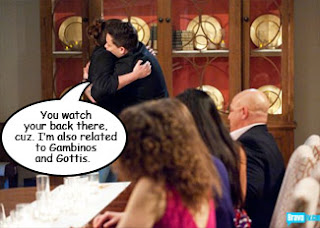 Next week: Ravens vs Steelers (I'm from Baltimore, so guess who gets to be the Ravens?). The two finalists get to create the "restaurant of their dreams."  Art Smith and Curtis Stone - double yuck.