So, finally we get the actual finale, between Richard Blais - who I always expected to be there -  and Mike Isabella - whom I neither expected nor wanted to place so high in the competition. Because, as you've come to learn over the past 38 weeks of Top Chef All-Stars, I just plain don't like the guy. He demonstrated his knack for being a sexist douche during season 6, which I do not appreciate, plus, I don't like his face.

The episode starts off immediately after last week's Judges' Table when Antonia is eliminated. While Blais and Mike pace in the Stew Room, Padma and Tom come in to give them their final challenge: to create the "restaurant of their dreams" in which they will serve a four-course tasting menu. More details will be given in the morning. 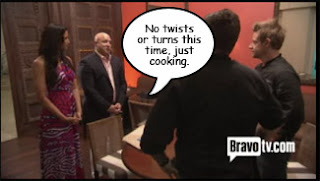 Mike says he has to win because he quit his job and missed his honeymoon. I have no idea what either of them have to do with winning or losing: he quit his job at Zaytinya in late 2010 to open his restaurant Graffiato, and he got married in August of 2009, long after Top Chef Las Vegas finished taping, and well before the All-Stars season was even a twinkle in Andy Cohen's eye.

The next morning, we see Padma in a large kitchen with all of the previously-eliminated recheftestants. They will be competing to become sous chefs for Blais and Mike and have 30 minutes to prepare two portions of an amuse for them to taste. 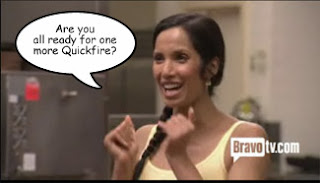 Back in their suite, Mike and Blais are discussing who they would and would not choose as their sous. Mike wants Jen Carroll because they are friends and because they'd worked together in season 6. He definitely does not want to get stuck with a certain someone, and who can blame him? 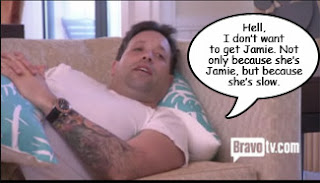 Blais thinks it's important to consider who wants to be there and who will listen to their directions. He'd prefer to get Dale, Angelo, or Jen.

The two suit up and head to the kitchen, where the recheftestants break into applause and Padma gives them their task. 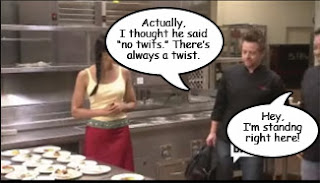 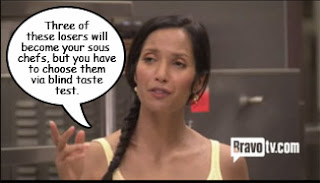 After tasting all of the dishes, Blais chooses those created by Spike, Angelo, and Antonia, while Mike prefers the dishes of Tiffani, Carla, and his favorite gal, Jamie. And I'm hoping she becomes a huge slug-like, whiny, disadvantage.

Each team has one hour to plan their menus, then five hours to cook for 70 people, including a buttload of judges. 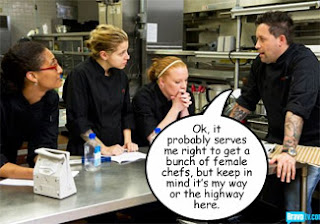 Mike chooses to call his place "Restaurant Iz." He tells his sous chefs that they will be making his food and that's that. On the other side of the room, Blais is allowing his sous chefs to play to their own strengths in his restaurant, "Tongue and Cheek."

With a mere five hours to cook, the teams get right to work in their respective restaurants, Mike at Seafire at the Atlantis, and Blais at Café Martinique. When Tom comes in for a visit, he plays with the chefs' minds. First he tells Mike, who claims to be in the weeds, that nobody expected to see him in the finale.(Least of all ME.) On Blais' side of the world, Tom reminds him that he blew it in season 6. Blais says that he's over being creative for creativity's sake and that currently he's trying not to think too much about what is at stake. 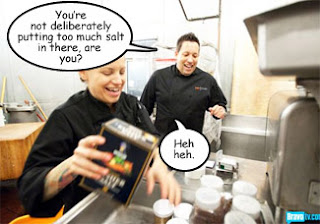 Time to dine. We see some of the judges arrive at Tongue and Cheek: Padma, Lidia Bastianich, Hubert Keller, Alfred Portale, and Bill Terlato, who of course provided the wines consumed during the meals. Blais starts things off with an amuse (which he keeps pronouncing "am-u-say") of raw oyster with lemon horseradish ice cream that the judges love and feel is very sophisticated. Next is raw hamachi with fried sweetbreads, a weird combo that proves very harmonious.

Meanwhile, at Restaurant Iz, Tom and Gail get the short straw and must dine with Art Smith and new Top Chef Masters host Curtis Stone. They agree that Mike's spiced beet salad with chocolate vinaigrette is a good start, and Tom is in love with the steamed halibut he serves next.

Back at Richard's, he serves pork belly, black cod, and bone marrow - all on the same dish - and makes the judges swoon. His next course of short rib with red cabbage doesn't get as much praise, however, although all of the flavors are good. It's just not that interesting. 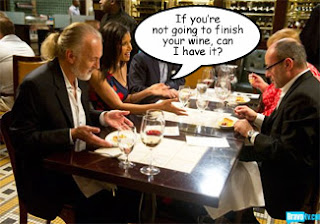 Mike serves a pork shoulder with pepperoni sauce that excites Gail so much she keeps repeating "pepperoni sauce." His dessert is a rosemary caramel custard that Tom thinks is overcooked and somehow cooked too fast, but tastes ok. Blais serves cornbread with mango and foie gras ice cream that is deemed a bit "controversial" by kitchen spy Spike, so Blais decides to change the ice cream up a bit before the second round of judges comes by.

The judges switch restaurants and we see more of the same lip-licking and praise. This time Blais' ice cream works better.

Back at the Stew Room, both chefs compliment their sous chefs. Apparently Jamie wasn't the liability Mike thought (and I hoped) she would be. And then its time to face the judges.

Both chefs are roundly complimented, which gives them both a boost of confidence. They are asked the "why do you deserve to win" question, which of course Blais answers articulately while Mike can only stammer something about doing it for his wife. 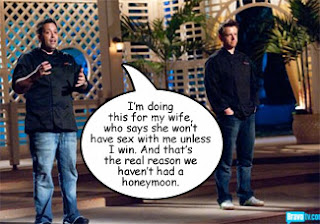 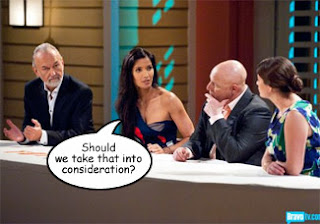 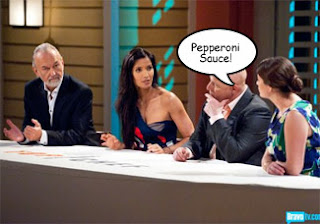 They are sent back to the stew while the judges make their very difficult decision. While there, Mike's mother, sister, and wife come in, along with Richard's uncle--his wife Jazmin is too pregnant to make the journey. Hugs all around. Meanwhile, the judges agree that Richard took the first two courses, and Mike took the third and fourth. But then Richard made that delicious amuse....

When they are called back out, Blais and Mike find their family members and the whole cast of recheftestants there to root them on. 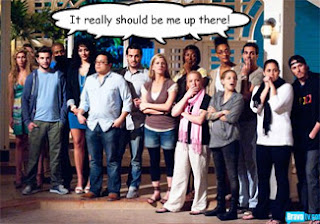 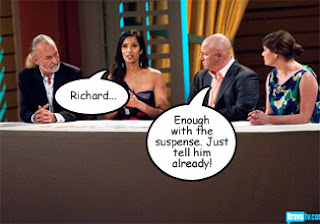 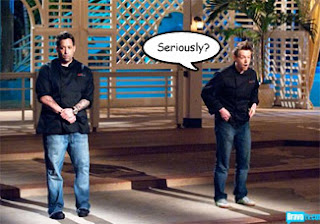 I'm kinda beside myself with joy when Richard's name is announced and I give a little cheer. Blais is my favorite Top Cheftestant of all time, and I was as nervous about this competition as if he was sharing his prize money with me. (He's not, obviously, but I'd be willing to take a few bucks off his hands.... Richard, call me!)

Next week - the reunion, followed by Top Chef Masters.