Mr Minx and I tend to go to the same restaurants over and over again, getting stuck in a favorite rut. While that's not a bad thing exactly, it's not something a food blogger wants to practice, particularly when there are so many places out there that we haven't yet tried. Last weekend, we checked out one of those places, Hampden's Rocket to Venus.

Richard Gorelick's 2007 CityPaper review made Rocket to Venus sound like a hip joint with good food. In 2011, I'm wondering what happened to that place.

Upon walking into the restaurant, I was immediately struck by the smell. Outside, the air was perfumed by fried onions, but inside, the dark room was full of a somewhat disturbing odor that was a cross between a barnyard and a sex shop (don't ask me how I know what a sex shop smells like). After several minutes, I got used to it, but hoped the source wasn't the kitchen.

After the hostess led us to our table against the interior wall of the restaurant, I had a look around. The odd oval windows filled in with glass blocks that ran along the opposite wall in the dark, somewhat depressing, industrial-green-and-black dining room seemed like portholes in an underwater dungeon. The bar and several tables were occupied by an assortment of folks: a young, tattooed couple with an infant; random hipsters in black; some hard-drinking types; a table of older women, one appearing to have just performed as the Artful Dodger in a matinée of Oliver. Our black-clad waiter reminded me of fellow students from my Maryland Institute days in his skinny jeans and rat's nest of hair.

I had chosen to eat at Rocket to Venus because the offerings on their Web menu seemed quirky and appealing. I was especially interested in the kimchee pierogies, the roasted Brussels sprouts, and the award-winning banh mi sandwich. Unfortunately, it was Sunday, and even at 6pm we were given a much-less-interesting brunch menu that included none of those things.

As we perused the somewhat disappointing menu, we were serenaded by the dulcet tones of Van Halen and AC-DC. After a few minutes, Mr Minx decided on the chicken and waffles, primarily because it seemed to make sense to have pulled chicken, rather than battered and fried whole pieces, on a waffle. "Pulled chicken" evoked "pulled pork" so we envisioned a bit of barely-gravy-moistened meat on a crisp waffle; instead, what arrived was more like a stew, one that completely swamped the waffle at the bottom of the bowl. It could have been a kitchen sponge, for all we knew. The container of syrup on the side was completely superfluous, as the dish needed no more moisture, and the sweetness would have seemed out of place with the gravy, which tasted of brown. Despite the unappealing gravy and waffle, we enjoyed the generous portion of tender chicken. 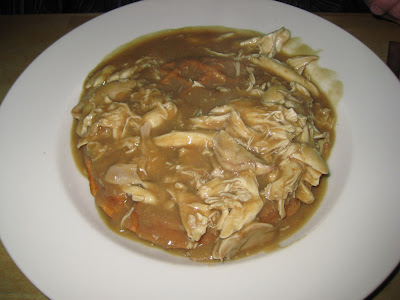 I'm a sucker for the now-ubiquitous beet salad and thought Rocket to Venus' version sounded good, "red beet, candied walnut, orange segment and feta tossed in light sherry reduction and extra virgin olive oil, served over watercress."  It also sounded like it would be prettier than it was. The uneven chunks of beet demonstrated a lack of knife skills in the kitchen, I tasted no dressing, and the only seasoning came from the salt of the feta, which served more to make the salad look dirty than to add any real flavor. The single branch of watercress under the beets included a large piece of tough stem. On the positive side were the generous portion of properly-cooked beets, and the candied walnuts. 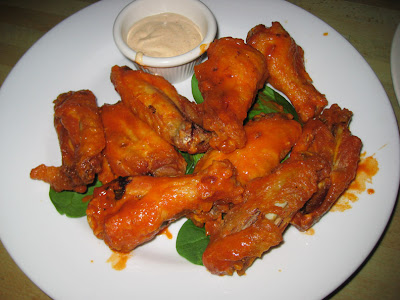 I also tried a plate of hot wings, which weren't particularly hot, but were a solid, traditional rendition, with a nice crispy skin and a Frank's-style sauce. They came with a side of "smoked habanero ranch" that could have been chipotle for I all knew, since it didn't pack much heat, but it was good, particularly when I dipped my otherwise unseasoned beets into it. In fact, if I could redesign my salad, I would drizzle the ranch sauce on the plate and top it with sliced beets and a handful of baby arugula or watercress leaves tossed in a light lemon vinaigrette. Hold the cheese, extra walnuts, please.

Service was fine, the food was hot, filling, and cheap, parking was easy to find, so even though the food was meh this time around, I'm likely to give Rocket to Venus another try, on a weeknight. For banh mi, and fried pickles.