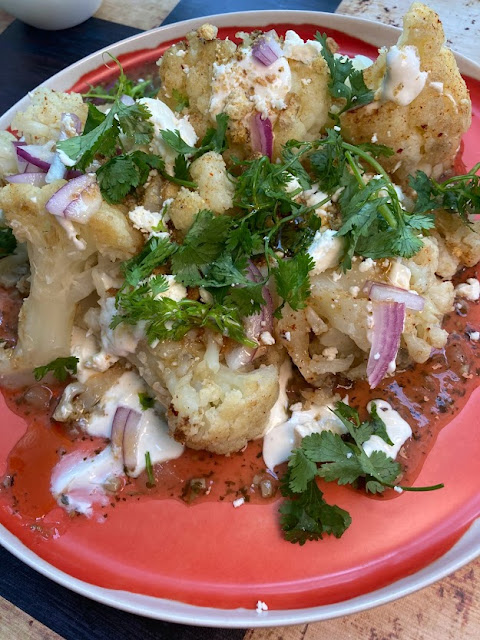 Is there any such thing as "street cauliflower" for reals? I had it at Baltimore-area restaurant La Food Marketa and loved it. A riff on a Mexican street food dish commonly made with corn and known as elote (on the cob) or esquites (off the cob), LFM's version topped cauliflower with cotija cheese, taco spice, and chili lime mayo. A tortilla crumble was employed for a much-needed texture contrast. When I got home that evening, I realized that I was in possession of a cauliflower and could easily make a riff on this dish at home. 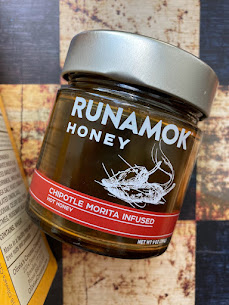 My pantry is currently stocked with food samples after a trip to NYC for the Summer Fancy Food Show. Among them are products from Runamok Maple and Olivia's Croutons. Normally when I make esquites, I whip up a little sauce with mayo, sour cream or yogurt, chipotle, lots of lime, and a bit of maple or agave syrup to balance out the tangy flavors. It's reminiscent of the sauce the late, lamented Gypsy Queen food trucks used on their crab cake tacos, and I've made it numerous times. This time, I omitted both the sweet stuff and the chipotle and drizzled Runamok's Chipotle Morita honey directly onto the cauliflower. (And then I had a spoonful of it for a "cook's treat.") It has a nice balance of rich honeyed sweetness and smoky chipotle heat, and I can see myself using it in a lot of applications, both savory and sweet. 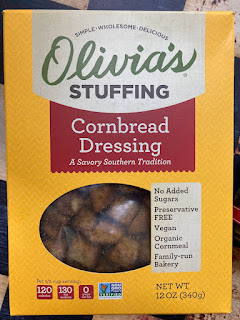 I didn't have any tortilla chips on hand, If I had, I wasn't inclined to do anything other than bash them into bits--forget making a crumble. But I did have a box of Olivia's Cornbread Dressing! The cubes of crisp cornbread are seasoned lightly with somewhat Thanksgiving-y herbs, but after sampling a few several, I determined that they wouldn't detract from the overall Mexican-ish flavors of the dish at all.
I hesitate to supply a recipe, since I just winged it (wung it?) as I usually do. I'll just offer guidelines, since I know many people prefer a recipe, or at least a list of ingredients.
Street Cauliflower
1 whole cauliflower (or hell, a bag of frozen cauliflower)
Salt
Full-fat plain yogurt or sour cream
Mayonnaise
Chili powder
Lime
Crumbly tangy cheese, like cotija or feta
Runamok Maple Chipotle Morita infused honey
Olivia's Cornbread Dressing
Cilantro
Chopped green onion or slivers of red onion
Trim the stem and any green leaves off the cauliflower. Cook in your favorite method. I put it, whole, in a big pot with enough salted water to come up about halfway, brought it to a boil, then turned down the heat and covered the pot. When the fork was tender most of the way through when I stuck a knife into it, I took it off the heat and drained off the water. You could also separate the florets, toss them with a little olive oil and salt, and roast them in a 400F oven until they're a texture you like. Or just pop a bag of frozen cauliflower in a microwave-safe bowl, cover it, and nuke it until hot and tender.
While the cauliflower is cooking, make the yogurt sauce. Put a half cup or so of sour cream or yogurt in a bowl. Add a heaping tablespoon of mayonnaise (or leave it out, if you prefer). Add chili powder to taste - start with a teaspoon, mix it in well, and add more if you want. Then squeeze in some lime juice. Taste, add more lime, add more chili powder, etc. until it tastes pretty good. Then add the magic flavor enhancer - salt. Not too much. Just enough to bring out the flavors of everything you just put in. If you happen to use a salted Mexican-type seasoning rather than chili powder, then ixnay on extra sodium. You could use Tajin and leave out the lime, too, unless you want more tang. It's up to you.
Pile the cauliflower on a plate. You could put some salsa down on the plate first, like I did, but it's totally optional. (I had half a jar of tomatillo salsa that I didn't want to go to waste.) Dollop with the lime yogurt, drizzle on the honey, sprinkle on the cheese, crushed cornbread croutons, cilantro, and onions.
Serves 2 as an entree, 4-6 as a side, dependent on one's appreciation for cauliflower. 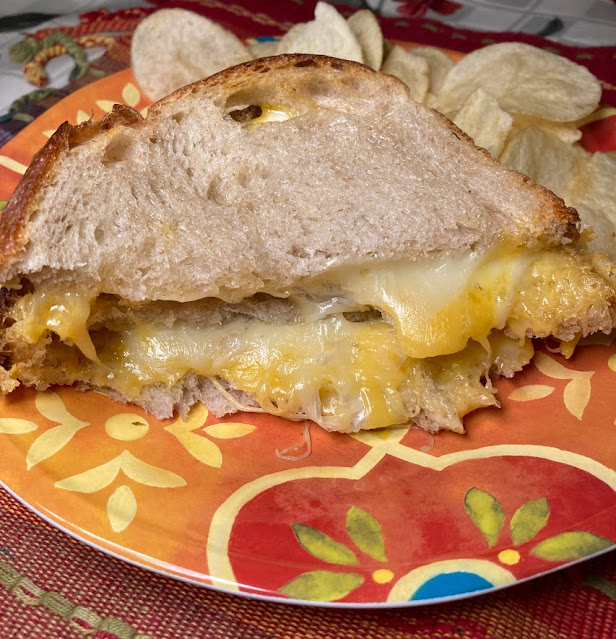 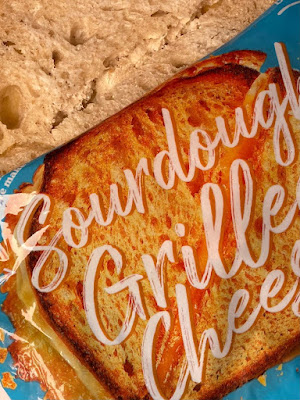 Who doesn't love a grilled cheese sandwich? It's one of the easiest and tastiest things to make for lunch or dinner (heck, breakfast too). Accompanied by a bowl of tomato soup, it's meal perfection. Soup in a can makes that part of the meal easy-peasy, but sometimes assembling a sandwich--and then having to cook it--takes too much energy. Lucky for those of us in the Baltimore area, Lane Levine of A Friendly Bread has created pre-made grilled cheese sammiches that come frozen. Just break it along the score and pop it in the toaster or oven (or microwave, if you're not afraid of what those things do to bread products) and voila! A crisp and delicious sandwich.

All you need to do is open a can to complete your meal.

Right now, A Friendly Bread's sourdough grilled cheese sandwiches come on country sourdough with sharp cheddar and mozzarella, and cinnamon raisin with brie and mozz. You can order the sandwiches for home delivery in Baltimore, or pick them up at Eddie's of Roland Park and Graul's, plus locations in Virginia and the Philadelphia area. There are also sourdough toasts, if you're into crackers, and Lane's promising croutons next. Click here for current shop locations, with more to come.
* Any products in this post that are mentioned by name may have been provided to Minxeats by the manufacturer. However, all opinions belong to Minxeats. Amazon links earn me $! Please buy!
Posted on Minxeats.com.
Posted by theminx No comments: