Before I tell you about my trip to Vegas and my dining experiences there (stay tuned for a future post!), I need to rant a bit about Rachael Ray.

Now, this uber-perky, whiney-voiced, no-talent, knows-little-or-nothing about cooking chick is probably a millionaire several times over now, and for what reason? Because she found a gimmick. But aren't there people out there who want to make a flavorful meal in a short amount of time? I've complained about her eggplant pasta sauce before - bland doesn't begin to describe the taste before heavy doctoring. Well, tonight, my husband decided to try her "Orange You Glad it's Thanksgiving" soup recipe - butternut squash and orange juice, with carrots and onion. After following the recipe to the letter (except for substituting canned pumpkin for the called-for frozen butternut squash puree; same thing), he ended up with an Orioles-orange soup that tasted just like...canned pumpkin. Only after adding a goodly amount of salt and pepper, doubling the amount of orange juice, and judicious seasoning with garlic, onion powder, and cumin, did it begin to taste like something. The cumin brought out the orange, and the much-needed salt brought out all of the flavors.

To gild the lily, we topped each serving with freshly grated orange rind and a dollop of goat cheese. I'm thinking it would also be wonderful with a garnish of crisply fried bacon or pancetta bits, pumpernickel croutons, and a snippage of parsley or cilantro. Serve with a nice arugula salad - now, that's tasty! We'll call it "Orange You Glad You Know How To Cook Better Than Rachael Ray?"

I'm thinking there's money to be had in a series of cookbooks based on The Cake Doctor, but "doctoring" up RR's recipes instead.
Posted by theminx No comments: 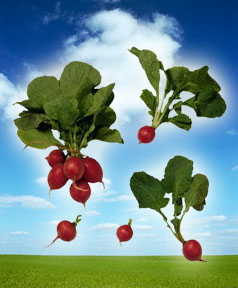 Most of us think of radishes as garnishes or something to brighten up the crudite tray. But have you ever eaten cooked radishes?

After my birthday party last Saturday, I had a huge bag of leftover crudites. I snacked on several of the radishes at work during the week, but there were still a good amount left by Thursday. I made a vague comment to my husband about cooking them somehow, and he ran with it. Last night we had sauteed radishes and onions as a side dish for leftover pork tenderloin. They were kickass! Tender and juicy, with a taste not unlike turnips, but without that metallic-y dirt taste. Yum! He had used the lone radish recipe from Joy of Cooking, but I got the idea that they could be used in more radical recipes.

Perhaps if one substituted the chicken stock and salt with a little soy sauce and added a bit of minced Chinese sausage, it would taste like one of my favorite dim sum dishes, turnip cakes? Or how about any of these recipes:
Cooked Radishes with Brown Sugar and Dill
Creamed Black Radishes
Sauteed Radishes
Scroll down to find Radishes with Pasta and Radish Greens
Posted by theminx No comments: