Season 7 & 8 Top Cheftestant Angelo Sosa--everybody's favorite "Asian on the inside" with tight pants on the outside--has opened a new restaurant by the name of Social Eatz. (His last effort, Xie Xie, though well-received, closed in 2010.) While Social Eatz is admittedly a pretty odd name (isn't eating out in a restaurant, by its very nature, "social?" and the "z" is just dumb), the restaurant has a good concept: adding an Asian twist to American favorites like hamburgers, hot dogs, and tacos.

Coincidentally, Social Eatz opened its doors for its first lunch on the same day I was visiting New York, and I couldn't pass up that bit of good fortune. Chef Sosa was in the kitchen; I was seated close enough to hear his voice, and occasionally, he'd pop out and look into the cheerful orange dining room that was branded everywhere with the blobular Social Eatz logo, including the table topz. (His pants, sadly, appeared to be of the baggy variety that day.)

The current menu is made up of (relatively) small plates and sandwiches.While the bibimbap burger sounded tempting, I opted to try smaller and less-filling items on my first visit. My server recommended ordering two or three, so I went for the Korean-style beef tacos served on a corn tortilla with a bit of seasoned mayo and a bean sprout kimchee, and the "hot wingz" which also had a Korean vibe. 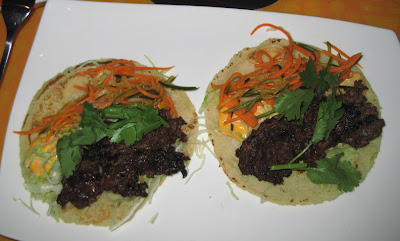 Put anything on a tortilla and I am a happy girl. Put something delicious on, and I'm even happier. The generous portion of meat had a sweet and savory flavor, and the other accoutrements added balancing creamy and tangy sensations. My only complaint is that the dish could have been spicier. Korean food can be incendiary, and I wanted at least a little heat. 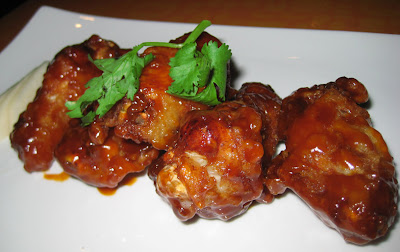 I could also have done with more heat on the so-called "hot" wingz (yes, I died a little inside ordering something with a z at the end of the name). Ok, they were hot - in temperature. Those little buggers were actually pretty sizzling, so I busied myself with my tacos while the wings cooled down. When finally able to bite into a wing, I found they had a nice crisp crust and mildly sweet, gochujang-like sauce, but none of the expected chile punch.

And then suddenly I understood where the "z" came in. As in snoring. While both dishes were tasty enough, neither of them made me want to jump up and slap my poor dead mother.

Both the tacos and the wings were extremely messy to eat. My server, noticing my sticky-handed peril as I attempted to do a crossword puzzle while eating, rescued me with a damp hot cloth, like the kind one gets at the beginning of a meal at some sushi restaurants. A nice touch.

When my plates were cleared, I was asked if I wanted another savory course, or to try dessert. While I would have liked to try the spring rolls, or the "ribz," or the kung pao sandwich, I had to save myself for a dinner date for early in the evening and went for what I hoped was a light dessert--cream puffs with a yuzu cream. 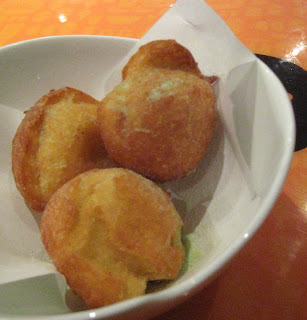 After waiting for several minutes, I received my fried-to-order dessert. I loved the consistency of the filling - it was an extremely light custard with a tangy citrus flavor, with still more tang provided by the yuzu sugar sprinkled on the puffs and at the bottom of the dish.

Overall, I think Social Eatz has a lot of promise; the whole Asian-inspired small plates thing really turns me on. The menu, on paper (laminated paper, actually), is full of items that I'd love to eat, and I'll most likely go back to try a burger at some point.