On a recent weekend, Mr Minx and I decided to check out the new Cuban restaurant in Towson, Havana Road. Who would have thought that such a cute little restaurant existed in one of the fairly small and otherwise generic storefronts on Pennsylvania Avenue? The decor is somehow both homey and modern, with mismatched tables and chairs in a cozy room with dark red walls adorned with posters and photos of Cuba, a black-painted ceiling strung with tiny lights to mimic a night sky, and bark-shaded pendant lamps. Each table is decorated with an old cigar box and a single fresh flower in a simple glass vase. We immediately felt at home, except that we chose the wrong chairs in which to sit - beware the high-backed straw-seated ones that are not meant for lingering.

For those who are unfamiliar with Cuban cuisine, it derives from a melange of Spanish, African, and Caribbean influences. The Spanish influence was apparent in the shrimp and garlic sauce appetizer from the specials menu; we also sampled the black bean soup.

Havana Road's rendition of the former was fairly simple: perfectly cooked shrimp relaxing in a bowl of warm, very garlicky oil, with lightly toasted bread on the side. I liked the way that the garlic was skillfully cooked so it was toasty and brown but not burnt, giving the oil a rich mellow flavor. 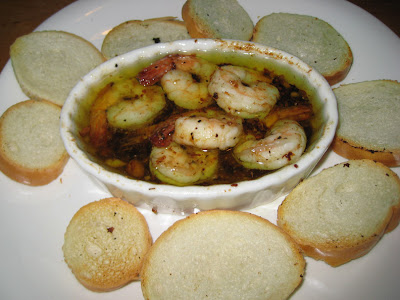 The black bean soup was even more simple, at least in appearance. Mr Minx says it resembled a bowl of very well-used motor oil. Although unattractive, the soup was quite nice; somehow hearty and delicate at the same time, mostly smooth-textured, and well-seasoned with a hint of cumin. 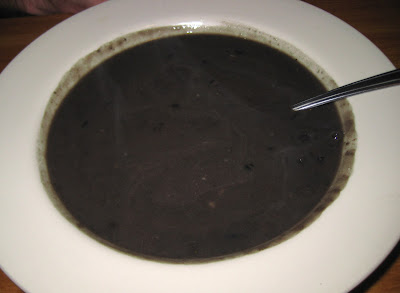 For our entrées, we tried the classic Cubano sandwich, made with slow-roasted Cuban pork, ham, Swiss cheese, mustard, and pickle, pressed on traditional Cuban bread, with a container of mojo sauce and plantain chips on the side. The combination of ingredients in a Cubano may seem ordinary, but the result was anything but - it's melty hot, gooey, but not greasy, and the onion/garlic/lime kick of the mojo gave the sandwich a bright kick. 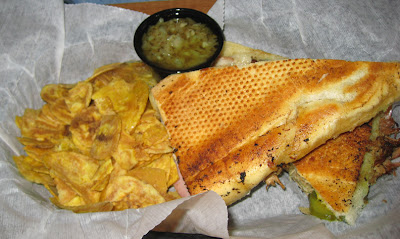 The ropa vieja--a dish of beef cooked so long and slow the meat falls into rope-like strands--was rich and hearty, and came accompanied by caramelized sweet plaintains, a bowl of black beans that was much like a solid version of the soup, and some plain (rather uninteresting) rice. The portion was so large, most of it was relegated to a doggie bag to be eaten later in the week. 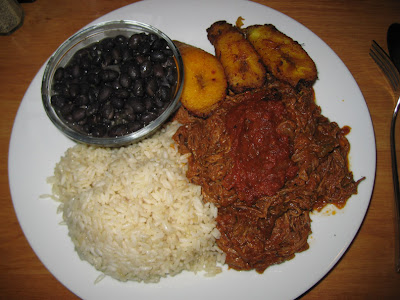 We also tried an order of the yuca fries - fingers of cassava fried until crisp on the outside and fluffy yet chewy on the inside - much better than most restaurant French fries I've had and definitely worth getting - and glasses of their fruit tea, a refreshing quaff that tasted mostly of citrus.

Overall, we were quite happy with our meal, but then we are big fans of garlic. If you are, too, you won't be disappointed with Havana Road.