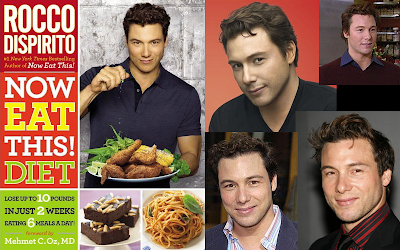 Rocco Dispirito has a new cookbook, a companion to Now Eat This! (Notice his farty brownies are featured prominently on the cover). Not only is the book new, but apparently so is his face. The photo on the cover is barely recognizable as him. The photo immediately to the right of the cover, with the orange background, is from his last book. It's pretty obviously retouched--unless he's found the fountain of youth, he looks younger there than in the three other, older photos--but it still looks like Rocco. (Just not a middle-aged Rocco. He's 44.)

So what do you think - a victim of Botox, or of Photoshop? (The platter of chicken is clearly Photoshopped.)
Posted by theminx