A Letter to Rocco DiSpirito

Once upon a time, I liked and respected you. Not because you were tall, dark, and handsome (although that helped), but because you were a talented chef with a seemingly long and bright future. Reading about your innovative and interesting food at Union Pacific made me want to dine there, particularly after New York Magazine labeled it, "pure genius."

Unfortunately for you, genius is often not enough to sustain a career. Especially when big egos and bad business deals led to an NBC reality series and your ultimate demise - on national television, no less - in the restaurant industry; now you must make a living hawking cat food, frozen meatballs, and cookbooks. Your first book, the aptly-titled Flavor, won you a James Beard Award just as your reputation was going down the crapper. I thought, "well, maybe his ego hasn't gotten so large that it squeezed out any remnants of 'genius.'" But then you decided to "get fit," which most people believe is a euphemism, in your case, for "plastic surgery." This new obsession with weight loss has driven you to create a new cookbook full of "low-cal" recipes. Rather than preaching the all-important portion control, you have jumped on the ingredient substitution bandwagon.
I've never believed in that approach. It's better to eat nothing at all than to ingest a pale imitation of the real thing. Wheat gluten will never be chicken, hydrogenated vegetable oil will never be butter, and Velveeta will never be cheese. Likewise, black beans will never be moist, chocolate-flavored cake. And to prove that, I've taken it upon myself to make your 53-calorie brownies, which are brownies in name only. They are, indeed, brown.
But before I got to baking, I had to go shopping.
Let's assume I have a normally-stocked pantry, one that includes butter, eggs, flour, sugar, salt, vanilla, leavening agents, and cocoa powder. Let's look at what additional ingredients I had to buy to make these brownies.

$4.49 Medaglia D'Oro instant espresso
$2.49 Egg substitute
$1.78 2 cans black beans
$3.69 Walden Farms chocolate syrup
$4.19 small box of Truvia
$1.49 small sour cream
--------
$18.13 total
Let's compare this to what I have to buy to make the recipe I normally use:
$5.95 Ghirardelli Sweet Chocolate and Cocoa
--------
$5.95 total
So for $18, these should be some fabulous brownies, right? A box of Barefoot Contessa brownie mix costs about $8, and I hear those are pretty damn good.
Shopping was annoying enough, but then there was the matter of equipment. To make the Ghirardelli brownies, I dump everything in one bowl, stir, and pour into a baking dish. But for your low-cal brownies, I had to drag out the food processor, because unlike butter and sugar, black beans do not meld easily with other ingredients.
After everything was blended to a fair-thee-well, I must admit the runny batter did at least smell very chocolatey. This sparked a little hope and soon I was farting in anticipation to taste these beany treats. But first, the baking.
I had to increase the baking time to 38 minutes, as a mere thirty minutes left a toothpick covered with goo. And here's the result: 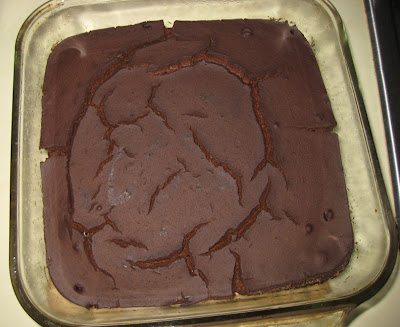 Beautiful, no? I'm going to say "no."
After waiting for the brownies to cool down completely, I cut them into 12 pieces. They were not-ungenerously sized. 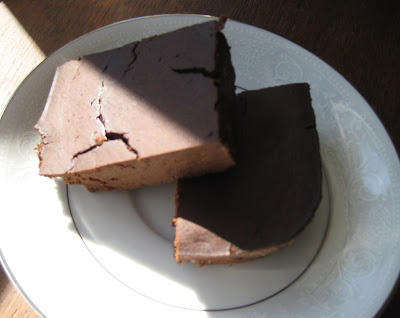 Actually, the pieces were too generous. One bite was more than enough.
How do I describe them? Hmm...well, the flavor was predominately coffee, with a soupçon of bean. On the positive side, they didn't taste as artificial as I expected, but there was a slightly bitter aftertaste from the sweetener. 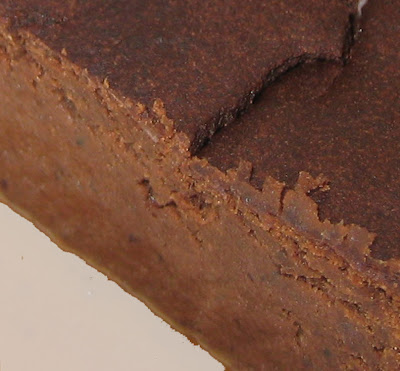 One of the joys of a good brownie is the contrast between crisp crust and either moistly chewy or cakey insides. These brownies, as one can see from the photo, were singularly smooth throughout, almost fudgelike, with small bits of bean skin adding the only texture. There was also a bizarre moist-yet-dry-ness to them. The only thing to which I can compare the texture is a mouthful of cold refried beans.
I did discover one way to make these brownies more palatable. 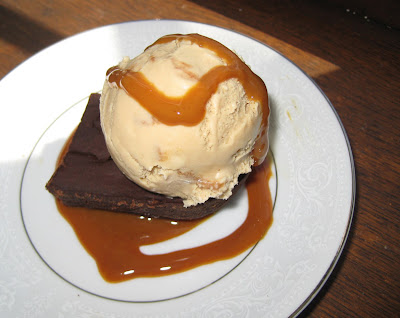 The cold creaminess of the ice cream and the sweetness of the dulce de leche added interest, not to mention flavor. A sprinkle of chopped nuts would have been nice too, for much-needed texture.

Overall, I will admit that I am not surprised at the result of this baking experiment. I did not expect them to taste good, or for them to fool me into thinking I was eating an actual brownie. Nor have they done anything to elevate you in my eyes, Rocco. In fact, I'm not sure you could sink any lower, culinarily. However, I am sure you will have much support from the hordes of drooling sycophants who still find you physically attractive and will put anything in their mouths as long as it has some connection to you.
With respect disgust,
theminx
Posted by theminx