Our recent trip to H Mart yielded several types of produce, including some huge poblano peppers. These babies were HOT! After roasting them over an open flame (i.e. the stovetop) and allowing them to steam in a paper bag, the fumes that emanated as I peeled and de-seeded them made me literally gag. Ai chihuahua!

Considering I've posted about chiles rellenos several times already, you know I love making and eating stuffed peppers--as long as they aren't bell peppers. (If bell peppers ceased to exist, I would not miss them.) This time I stuffed them with the blue crab meat I had originally picked up to use with the rockfish. I eschewed the usual Maryland-style Old Bay-inflected mixture and instead added pinches of cumin and ancho chile powder and a wee bit of molé paste to an otherwise fairly typical crab cake base of milk and bread (also called a panade), egg, and mayo. 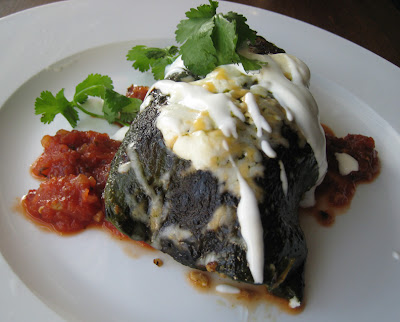 Rather than batter the peppers, I simply pan-fried them as-is in a bit of canola oil. They looked stunning, especially when topped with a bit of colby jack and cotija cheeses, a drizzle of sour cream, and placed on a bed of TJ's chipotle salsa, but somehow the flavors were off. The intensity of the pepper and the salsa made the crab seem fishy, although bites of the crab on its own tasted just fine. So, good idea, bad execution? Or just a bad idea? Regardless, I shan't attempt this combination again. Next time, I go back to a pork or chicken stuffing for my peppers. And hopefully they won't be as incendiary.
Posted by theminx