We were originally scheduled to visit Grace Garden for a Chinese New Year feast in late February, but the blizzard(s) had other plans for the restaurant's roof. After closing for a few weeks for repairs, Grace Garden re-opened and thankfully re-scheduled our orgy of gastronomic delights. Mr Minx and I were two of 36 members and friends of the Charm City Chowhounds who paid a mere $25 per person to enjoy ten courses of some of the best Chinese food in the area. Regular readers already know how much I enjoy my trips to this small restaurant in the wilds of Odenton.
After the crowds were assembled around three large round tables equipped with lazy susans, dishes, and utensils, and the din of people chattering reached near-unbearable levels (I couldn't hear myself speak), the food started coming out and soon nothing was heard but the sounds of slurping and murmurs of pleasure. Ok, but it did get quieter.
First up: Brocade Pouches of Many Treasures - described on our special menu as "pomegranate-shaped wonton chicken soup." 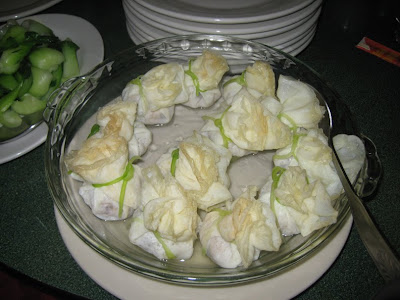 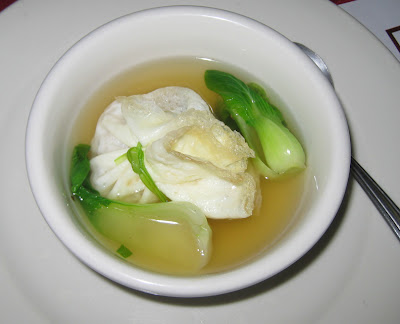 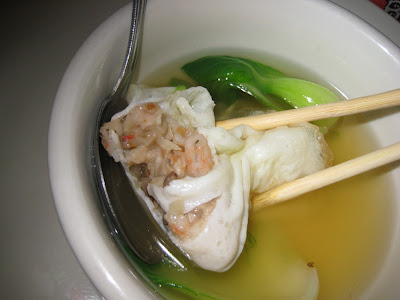 The broth came out first and we all eagerly helped ourselves to a serving. The "pomegranate-shaped" wonton, in the form of beggar's purses, came next, followed by plates of baby bok choy. When assembled, this wasn't your mother's won ton soup - the broth, although billed as chicken, had vaguely seafood-ish flavors and a hint of chile heat. The "wonton" was actually an egg-white omelette or crepe wrapped around a chunky filling of chopped shrimp, pork, and other goodies. Unusual and very good - we could definitely have enjoyed a larger portion, but we were each sharing with 11 other people....

Next up came a dish billed as Laughing Mouth Always Open - stir-fried clams with XO sauce and minced pork. 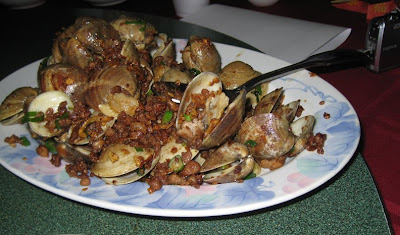 We each got about three clams, the taste of which was a tantalizing melange of the dried-seafood flavor of XO sauce and the pebbly texture of the pork.

For our next course, we received Gold Coins Everywhere, which were shrimp-paste-filled shiitake mushrooms over lettuce and hair moss. The "hair moss" must have been the green vegetable bordering the dish, one the many variations of the genus Brassica that is so popular in Chinese cuisine. This dish reminded me of something one might have at dim sum, with the shrimp paste not unlike shrimp balls, or the filling one might find in eggplant, tofu, or dumpling dishes. 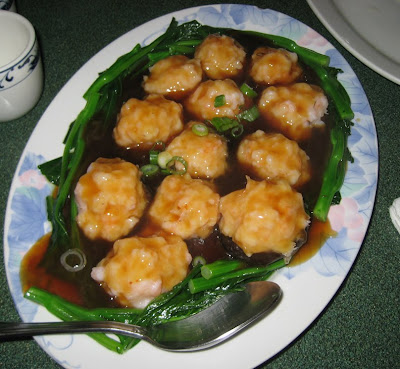 Next we were served Happy All the Time, or lemongrass fried lamb chops. This was one of the best things EVAR! The chops were succulent, still somewhat pink inside, the outside savory with lemongrass and spices. I wanted to grab the platter and sneak off with it, but alas, I had to share with my tablemates. If only this were a regular menu item, the Minxes would order it every time. And maybe an order to-go. 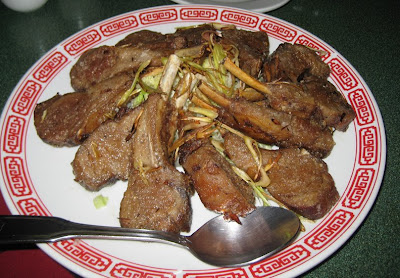 Another favorite of mine was A Million Wishes Fulfilled, a.k.a 8-treasure sticky rice-stuffed duck. I've seen this ordered by other diners and was put off by the raw-looking paleness, but it is truly a dish that tastes far better than it looks. It is a study in unctuousness. The duck meat itself is impossibly tender, the sticky rice stuffing, which absorbs much of the fat and juice from the duck, is an oily delight, and the skin itself just melts in the mouth. For a little bit of textural content, the rice contains bits of chestnuts and ginkgo nuts. There was plenty of this dish to go around, so I had my fill. And we took the leftovers home with us. Score! 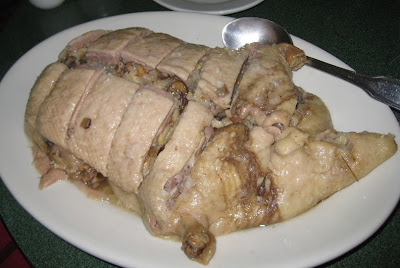 In contrast, the flavors in Every Year is a Prosperous Year, a dish of whole fish and tofu cubes in a spicy bean-paste sauce, were sharper and more pungent. I think the dish could have been far spicier, particularly considering the mild dishes that preceded it. The fish were small and I got more bone than fish (the cheek) but the meat was succulent and I kept going back for spoonsful of sauce to moisten bits of rice. 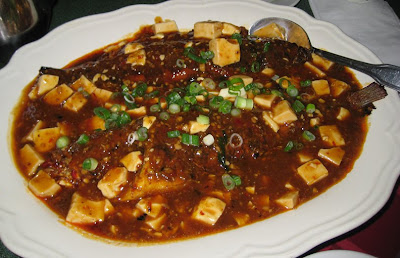 Got to have a vegetable at some point, and the one we were served was called Golden Branches and Jade Leaves which was pea shoots with egg. I was extremely curious to try the gelatinous brown chunks, since I knew they were the whites of preserved eggs. They tasted like...egg white. The greens themselves were delicious, crisp, a touch of Spring. I could have done without the egg flavor, however. 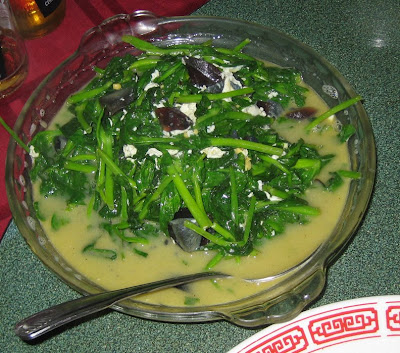 As we neared the end of the menu, we were presented with a dish to which I was looking forward: Dragon King Celebrates an Abundant Year, which was pan-fried lobster in a sweet-ish sauce reminiscent of sweet and sour. But...not the gross and gloppy pineapple-and-bell-pepper-infected sugar-fest that constitutes sweet and sour in most American-style Chinese joints. This one was possibly a more-authentic tomato paste-and-vinegar concoction, light on the vinegar. In any case, the lobster was tender and although it was a bit hard to extract the morsels of meat from the sauce-coated shell, it was worth the mess. 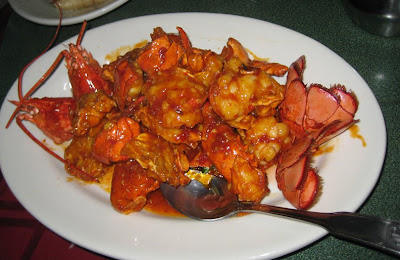 Our final dish was billed as Golden Fried Rice, although it doesn't look particularly golden. It was full of bits of shrimp, fish, and scallop and topped with crunchy fried garlic. Not a stereotypical soy-colored fried rice at all, and even tastier. 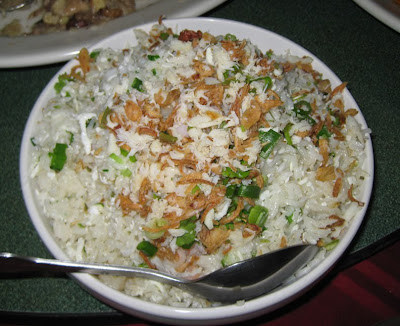 But wait - there's more! We thought we were finished eating, but were brought a bonus dish of Grace Garden's now-famous Fish Noodles! 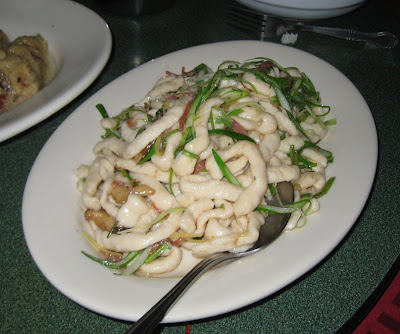 Yum. 'Nuff said. (We also got to take home the leftover noodles and fried rice.)

Finally, for dessert, we were presented with scary Jell-O. A downer in a meal of high notes. The menu said something about rice cakes, but apparently things changed. The agar jelly, flavored with red bean and some sort of tea (jasmine?) was certainly lighter and possibly more refreshing, but I can't say I'm a big fan of gelatin in any form. Maybe if it were all tea jelly, I could have enjoyed it more. In any case - I ate it. Yeah, I'm a hypocrite. :) 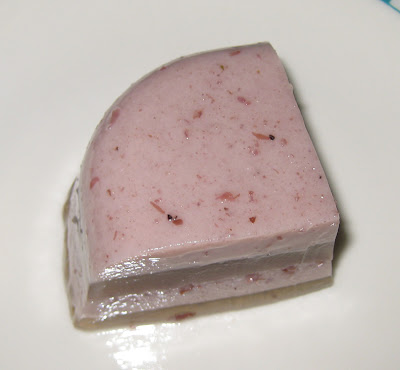 That's it! What? You thought there'd be more? Eleven courses is plenty, believe me. After the first three I thought we'd have to go for a cheeseburger afterwards, but once the heavier dishes came out I was able to eat my fill. And then some.

Overall, a great dining experience. Mr Minx and I sat with our friend and fellow blogger Dara and her friend Jeff, and met several other dedicated local foodies. I look forward to our next Charm City Chowhound adventure.

thanks for sharing...I can enjoy the experience through you...:-)

Thanks for the mention and writing this up. Great sharing good food and good company. Agreed about the dessert.

theminx said...
This comment has been removed by the author.
3:12 PM