Yet another 90-minute episode of Food Network Star to piss me off. Why, why, WHY did we need to see those buffoons running around and being incompetent for 90 minutes? Doesn't the Food Network know that sixty minutes of anything on their channel is more than enough to stomach in one sitting?

In any case, we start off as usual with a Camera Challenge. The Wanna-bes find Giada standing next to a giant vending machine which will randomly dispense Hershey's chocolate products for each contestant, who then have one hour to use the product in a savory dinner dish. This is an important challenge because every potential Food Network Star needs to know how to incorporate corporate sponsorship into their meals! 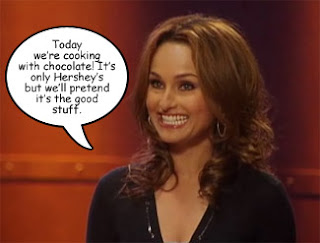 Frat Boy got York Peppermint Patties which gave him the brilliant idea to make lamb with a mint chocolate pesto. And then, because he's a show-off, he decides to make some Dover sole, too. Dover sole? Really? Does he know how freaking expensive that shit is? And he's going to fuck it up with Hershey's chocolate? That's like seasoning foie gras with a turd. 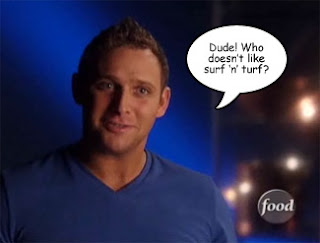 Vic is also smoking crack, because he's thinking that dipping asparagus spears in chocolate is a great idea. The only good idea in the bunch comes from Jyll, who makes coconut shrimp with her Almond Joy drops. Even Middle Eastern Penny admits it's a genius idea.

Time's up and the Wanna-bes are sent to the "Butler's Pantry" (because there are tons of butlers on staff at the Food Network, and of course every home cook has one of those, too) to wait their turn in front of the cameras. Frat Boy keeps on telling us that he's mature and taking the competition seriously, but comes out with notes written on his palm, which Giada notices. His lamb is undercooked and the peppermint is way too sweet. Vic's asparagus tasted as horrible as it sounded but his presentation was better than it has been. 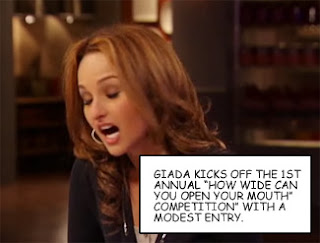 Alicia loses it in front of the camera and ends up on the bottom with Vic, whose dish was too complicated. Plus that whole asparagus and chocolate thing. Both Giada and Tushface adored Jyll's shrimp dish, giving her the win and an advantage in the next challenge...

...which is the Star Challenge, and for this momentous occasion, the Wanna-bes are paid a visit by an unlikely and un-dynamic duo - Ace of Cakes Duff Goldman and Restaurant: Impossible host Robert Irvine. 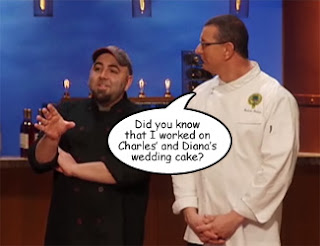 Yes, it is a dessert challenge. A team dessert challenge. The Wanna-bes will be divided into two teams, chosen by Jyll, one cooking for Duff and one for Robert. Each contestant will be responsible for 150 portions of their own dessert, plus helping with two team desserts, for a total of 1200 dessert portions per team. Robert tells the group that he expects his team to prepare "impossible" combinations, while Duff wants colorful desserts that children would love. 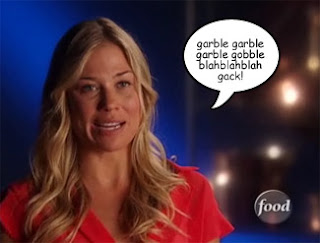 Alicia tells us that she went to pastry school, and if she lost this challenge, she'd never live it down. Can you smell the loser edit from there?

Jyll chooses to work for Chef Duff and picks Alicia, Orchid, Mary Beth, Whitney, and Susie to be her team, leaving Middle Eastern Penny to battle with the boys. 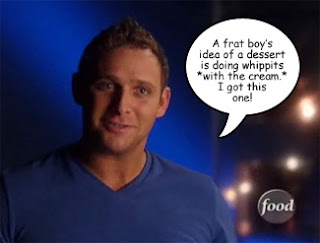 After $2000 worth of shopping, the Wanna-bes suit up and head to the kitchen for 6 hours of prep. Once there, Frat Boy appoints himself the leader of Team Robert and decides that he's going to crank out some ridiculous number of desserts including a chocolate ganache cake he's only ever made for 10 people. Curious George decides to tune him out. On the girls' side of the kitchen, nobody is in control, but that's ok because they are having FUN! Wheeee! Six women, lots of sugar, chocolate, and heavy cream? What's not to love? Meanwhile, Alicia is afraid that she's not remembering her cupcake recipe correctly. 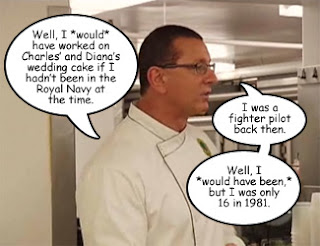 The boys are loud and unruly and the kitchen looks like a disaster when Chef Robert comes in for a check on Team Slobert. 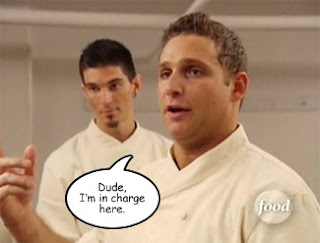 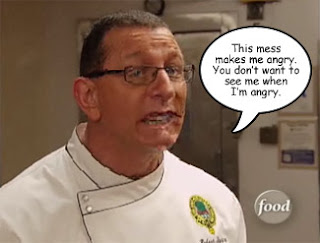 He asks who is in charge, finds out that Frat Boy has taken the lead, immediately demotes him to toilet cleaner, and assigns the head chef role to Curious George. The team is supposed to be making interesting desserts, but Robert finds all of it to be rather pedestrian apart from Justin D's corn dessert.

Not in charge anymore, Frat Boy quiets down. That doesn't help much, as two separate batches of his chocolate dessert fail on him. That's what happens when you take a recipe for 10 and try to stretch it to a recipe for 200. 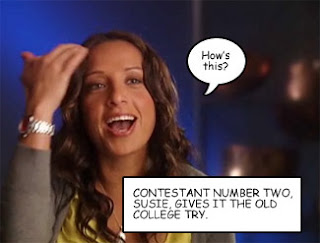 On the girl's side, Susie realizes that she's a dumbass because she forgot to buy oil in which to fry her churros. The batter becomes pancakes, instead. Mary Beth is also having issues with her cookies, which meld into one giant cookie on the baking sheet. And Alicia is freaking out and stressful. This team needs leadership but none is coming. 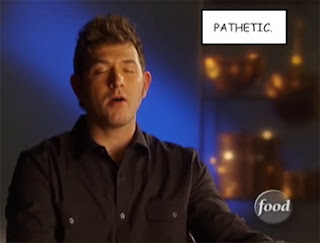 Back on the boys' side, Frat Boy does something even more stupid than usual - he tries to open a door while holding an armload of his apple tart. Everything hits the floor. And then we see the tart being served later.... 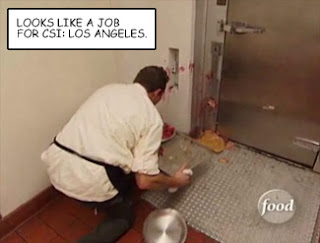 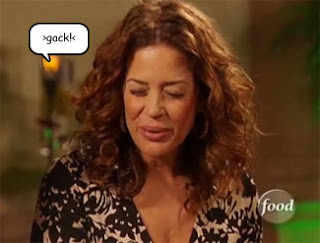 At the venue, Frat Boy makes sure to compose himself because he's "amazing" in front of the public. What? Not "awesome?" Once the guests start coming in, he flirts with the female attendees and gives out his e-mail address. 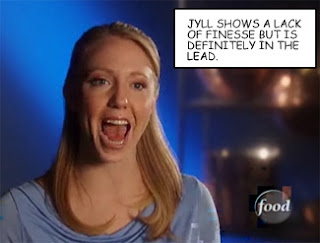 The dishes were all hit-or-miss, but it wasn't surprising that nobody seemed to like Alicia's cupcakes. One guest even had the audacity to say that she didn't feel like she was eating a dish made by the Next Food Network Star. No shit, Sherlock. 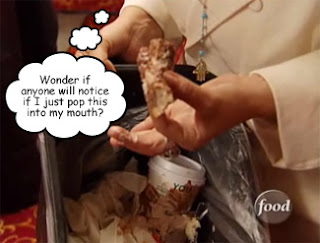 Middle Eastern Penny takes great delight in rummaging through the garbage can to show off the uneaten cupcakes. Or maybe she just likes the sensation of garbage squishing through her fingers. Hope she didn't plate anything after that. 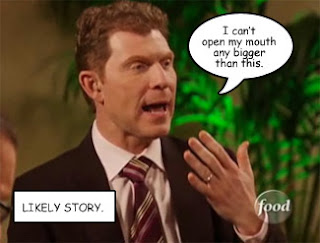 The judges show up for tasting and hit the girl's team first. While Alicia's cupcake didn't seem to be reviled by Bobby and the Gang, they did say that it was not something they would expect from a pastry chef. Apart from Whitney's cream puff, everything else was just meh. On Team Robert's side of the room, Frat Boy presents his dishes to the judges. Well, only to Bobby. He goes on and on about his pie and doesn't make eye contact with Bride of Fogelstein or anyone else. Granted, she is damn scary. Bottom line, Frat Boy's pie was bad and his personality was offensive.

The next day, the teams face the Selection Committee. The winning team, Team Robert, meets the firing squad first and are told that the judges liked Penny's saffron and coconut milk rice pudding and the team effort orange fennel ice cream. Curious George's popcorn was a big hit, but what did he do for the other 5 hours in the kitchen? And where the fuck is his personality? Justin D's corn pudding was "awesome" and "elegant," but Susie wondered why he was so meek. Vic's cream puff dish was risky, but it was Bobby's favorite of the day. 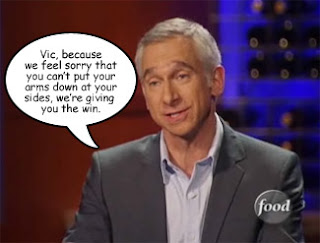 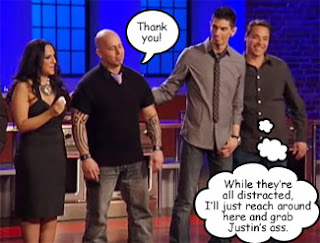 Apparently Tushface is a "whoopie pie connoisseur" and he prefers them soft and pillowy rather than Jeff's cookie-like creation. I don't want to know what he really does with the things. 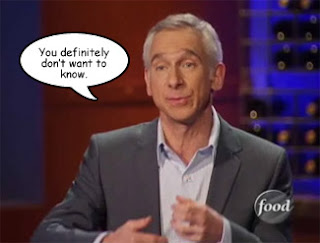 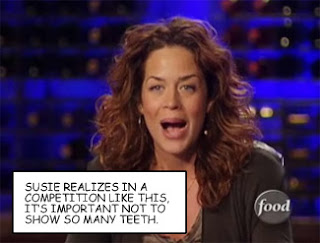 Losers Team Duff were up next, telling the panel that they had a ton of fun. Bobby tells them that this is the Food Network not the Fun Network. I think that's pretty obvious at this point. Orchid, Whitney, and Jyll are safe, but Alicia is stunned to find that guests didn't like her cupcakes and cake pops. Susie's pancake and sauce were a really bad idea and her poorest culinary showing this far. And Mary Beth's milkshake was not only too thin and milky, the cookie crumble that she made from her disastrous tray of cookies kept getting stuck in the straw. 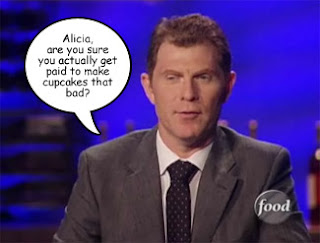 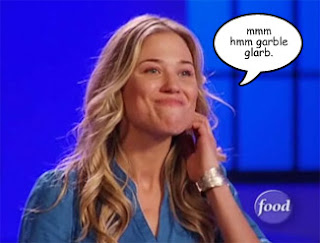 As was obvious from nearly the beginning of this 90-minute shitshow, it was Alicia's time to go. While I was ok with her the past two weeks, her tendency to CRY ALL THE FUCKING TIME got on my nerves. Don't let the door hit you on the way out, 'k?