Welcome to another exciting recap of Douchebag'sRocco's Dinner Party! This week's chefpetitors are Joel, a high school culinary instructor (back in the day, we used to call them "home-ec teachers"), Michelle, a private chef, and NY restaurant owner, the Thai/Filipino King. And before you start thinking that this guy is even more egotistical than the host of the show, "King" is his first name, not a title. Speaking of egos, not long after the chefpetitors familiarize themselves with the kitchen, DouchebagRocco comes in to task them with their first challenge - to create their signature dish for him to sample and ridicule.

Time starts and we see Joel scoring the skin on a duck breast. DouchebagRocco comes over and decides to quiz him on technique, and Joel tells us he's a home ec teacherculinary instructor - of course he knows how and why to score the skin on a duck breast! Then DouchebagRocco goes over to King and sniffs his scallops, asking what kind they are, and is generally an annoying nosybody. 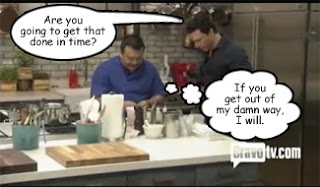 When he gets to Michelle, who is making an etouffée with all of her vegetables and roux in the pan already, he casts aspersions on her decision to make a dish that should take "four hours" to cook in only thirty minutes. Having made many etouffées myself, I cringed at her lack of a dark roux, but can attest to the fact that once that roux is made, the rest of the dish comes together in about half an hour. But still - gotta have that dark roux. (A shortcut - spread your flour on a baking sheet and roast it at 450F for 15-20 minutes, stirring every 5, until brown and fragrant. Add to oil in hot pan and bam! there you have it - an almost-instant dark roux.) 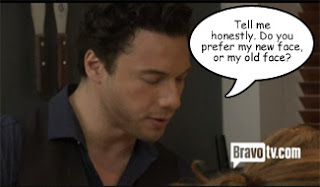 Time's up and the chefs plate their dishes. Unfortunately for King, while putting his noodles down, he notices that his beautiful scallops are still in another pan and he won't get the chance to serve them. The chefs then take their dishes to the Altar of Judgement where DouchebagRocco awaits, sneering.

He tastes King's dish first, noting that the scallops are missing. King makes the lame-o excuse that they were undercooked and thus unfit to serve. DouchebagRocco counters with the fact that undercooked or raw scallops are perfectly delicious. Fortunately for King, the rest of his dish tastes wonderful.

Next up is Joel's duck. Because it is so perfectly cooked, DouchebagRocco is actually forced to compliment the man. The salsify, on the other hand, is a bit hard and crunchy and not to his liking. 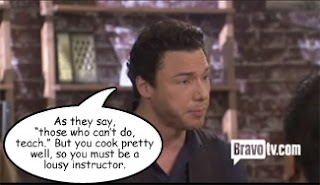 He then turns to Michelle and plays dumb when he sees the whole crawfish garnish. "Do I eat the whole thing?" he asks, stupidly. After tasting, he admits that it's better than he expected it to be, which is quite the backhanded compliment because you know he expected it to taste like ass. He said there was a lot of love in the dish, but there was also the taste of raw flour. 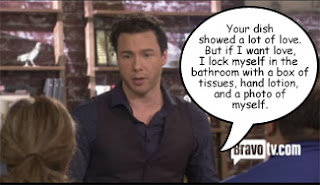 After deliberating for a few seconds, DouchebagRocco tells Michelle that she's out because he wasn't convinced that she could pull off the evening. And because she's a girl AND a private chef. Oh, you know those were the reasons! So Joel and King get to compete for the cash. 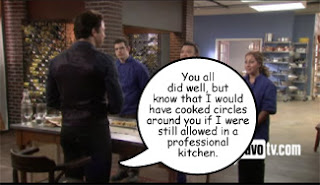 The theme this week is "Mystery Guest," and DouchebagRocco hands a dossier of said guest to the two remaining chefpetitors. Mystery Guest loves Bali, Italy, clean flavors, and spices. Armed with that info, Joel and King meet with Jen Gordon who helps them plan their room decor. Joel's clearly never done this before and gives some vague instructions, but also decides to do a party game in which the attendees answer the question "if you were a teacher, what would you want to teach." King wants to go full-on tropical with his decor, adding a Vespa for the flavor of Italy. Mario Batali would approve.

After shopping, we find Joel and King in the kitchen prepping their meals. Joel is starting off with a steamed clam and mussel appetizer, followed by a stew of borlotti beans with a homemade Dijon sausage, and ending with a sourdough bread pudding and cardamom ice cream. Sounds completely scattered and theme-less to me. King, on the other hand, is drawing from his Asian roots and making an puu puu platterappetizer trio of bbq ribs, papaya salad, and spring rolls, followed by a seafood green curry, and a coconut lemongrass panna cotta. Right away I decide that I would prefer King's menu over Joel's, but then I wasn't invited to the party. 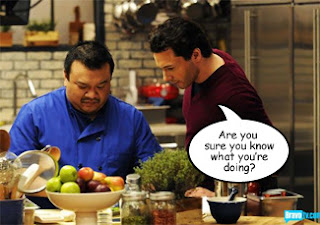 The guests arrive and they are a motley crew: fashion designer Gilles Mendel; skeletal stylist Mary Alice Stephenson (if he wasn't dead, I'd suspect it was really Skip Stephenson in drag); and Glamour editor Cindi Leive. Hey! It's a fashion industry party! But wait...there's also Brazilian singer Bebel Gilberto. And...DL Hughley, dressed like an unemployed lumberjack. WTF? If they needed a token African-American guest for their little mandatory melting pot, why not Iman? She'd fit the theme, plus she's under contract to Bravo. Or maybe they did ask her, and she gave them a look like, "do you know who I am, mortals?" and laughed in their faces. That's what I'd like to imagine she'd do. In the words of Christian Siriano, "bitch is FIERCE." 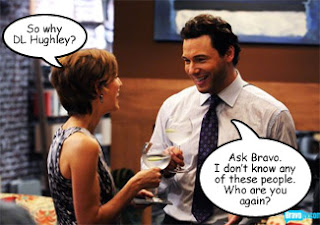 A few minutes later, the Mystery Guest arrives and it's...Padma Lakshmi! Woo hoo! A Bravo-lebrity! You know, if you invited folks that the viewing audience might know or care about, you might not have to whore out your own "talent." How about Clooney? But I'd settle for Iman. 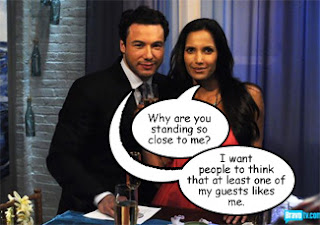 DouchebagRocco takes Padma into the kitchen where Joel and King do a bad job of: 1) pretending they know who she is; 2) pretending to be excited. Padma hands them a jar of her own brand of spices, in the Afro-Caribbean flavor, and requests that they take five minutes and make a cocktail snack with it. Literally, five minutes. So they slam their aprons down in disgust, stop what they're doing, and work on a quick fish dish for the prima donnas to nibble with their champagne.

Out in the living room, first King's salmon and then Joel's tuna are served. The latter is more aggressively spiced and the guests agree Joel's is the better of the two.

On to dinner. Joel's going first, so the guests enter the Terrace Dining Room which is decorated with racks of spices and mossy things on the table. There are also chalkboards with the "if you were a teacher" question on them serving as clunky placemats. After the diners dutifully ask each other what courses they would teach, out comes an amuse of prosciutto on a Parmesan tuile, which is awkward to eat. 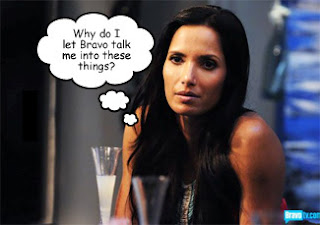 Then comes the clams and mussels, which squicks out Mary Alice (who looks like she doesn't eat at all most of the time). She tries the mussels anyway and to her surprise, she likes them. So does everyone else. The borlotti bean stew is well-received, but the guests agree that the sausage could have been better-seasoned. Finally, the bread pudding comes out and is enjoyed by all.

Meanwhile, this is the most boring dinner party ever. The most interesting thing is finding out Gilles Mendel snacks on "potato sheeps" while he is working on his latest collection. And then while DL pretends to be turned on, Padma drunkenly goes on about making potato skins in which she boils the potatoes, holds the hot potatoes in her hands, and cooks bacon slowly so it gets "spicy." She must have snuck out for a doobie on the fire escape at some point before telling that story. 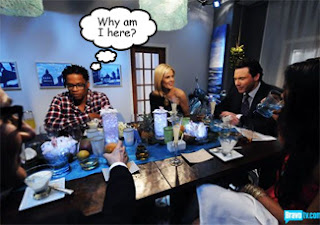 The guests all head to the Intimate Dining Room for the next party and find a tropical paradise - with a Vespa in the corner. And I seem to be the only person who finds it odd. I'd like to think that Rocco is mortified at the site of it because he is suddenly and cruelly (ha ha HA!) reminded about The Restaurant, in which he tools around (tools, heh) on a Vespa. That show, of course, was the beginning of the end of his great culinary career.

Anyhoo...King's dishes come out and immediately the consensus is that everything is too-familiar. Because in New York apparently everyone eats papaya salad on a regular basis. King's best dish was his panna cotta, with even Rocco raving over the perfect texture.

DouchebagRocco leaves his guests to deliver the good and bad news to the chefpetitors. He's decided that Joel is the winner of the $20,000, and that King should just go home and cry. Cry tears of joy that he is allowed to leave with his life, even if his dignity is no longer intact. 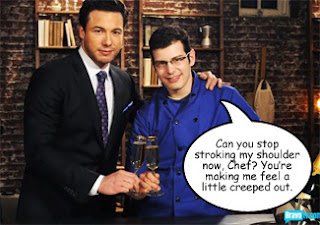 Next week: More Bravo-lebrities in the form of Real Housewhore of New Jersey, Caroline Manzo! Gack. At least they could have invited the insane table-flipper. Now THAT would be a party!