The show starts off with the Wanna-bes at home. Bespectacled Justin D tells us he's not feeling good about his latest performance and right off the bat we have our loser edit of the day! So why do we need to put up with another 88 minutes of this shit? Because the Food Network is all about the torture, people. It's like waterboarding, but without the possibility of a welcome death at the end. 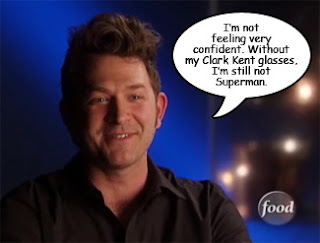 So the eleven remaining Wanna-bes head to the Star Kitchen where they find Melissa D'Arabian waiting for them with a pile of Kellogg's products - we all know how much she loves All-Bran! And, on the tables in front of them, are cloches concealing the Kellogg's product they will be required to use in creating "an impressive and sophisticated hors d'oeuvre" for a mystery guest who will be appearing in 45 minutes. The products are revealed! I know - the suspense was killing you, too, right? 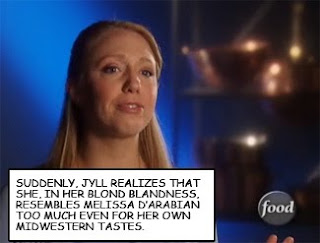 The Wanna-bes scurry to make their dishes. Justin D has a brain freeze and can't figure out what to make. He's smelling more loser-y by the second! And time is...up!

In walks the special guest judge, none other than long-time Food Network fixture, Iron Chef Michael Symon. Susie immediately freaks out and reveals that she has a crush on him because he's sooooo cute! <giggle><eyeroll>

Bob Tushface joins Melissa and Michael while the Wanna-bes are led into the Butler's Pantry to await their turn to present their disastersdishes to the camera.

Frat Boy comes out all pumped and delivers the best performance of his tenure on Food Network Star. Which ain't saying much at all. 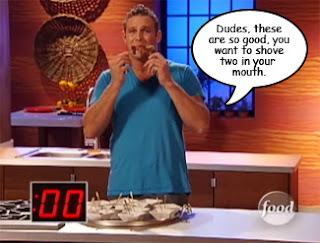 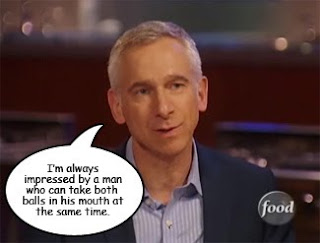 Michael Symon and Vic have a mutual baldness admiration society going for a few minutes. Jyll's crabcake is a big hit. Susie is predictably nervous in front of her crush, calling her product Town House "Flip Shares" for some reason, throwing off the rest of her presentation. But she gets a thrill when Michael tells her that he enjoyed her bite best of all. Middle Eastern Penny's dish and presentation do not impress Melissa D'Arabian, who calls her "lower middle of the pack." That just makes me laugh out loud. 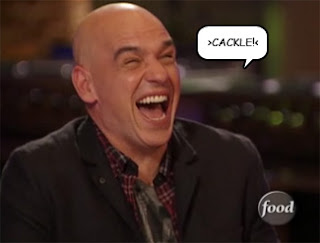 And guess what? this week's loser Justin D didn't do very well with either his food or his presentation. Same goes for Curious George, who has great culinary skills but is a dud in front of the camera. However, he gets a compliment from Melissa who calls him "lovely" when he smiles. I still think he looks like a giant monkey that just happens to have pierced ears. 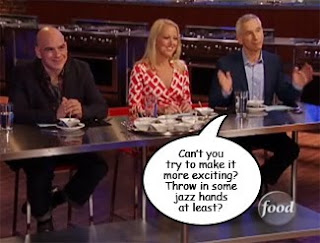 Jeff, always the clown, thinks that using All Bran gives him the right to make thinly-veiled poop jokes. Unfortunately for him, the gag was more of a sinker than a floater.

Overall, Tush was impressed with everyone's creativity. Frat Boy and Jyll scored the most points, with Jyll getting the win. On the bottom were Curious George and his stiff presentation and Jeff and his Inakindergarten humor. Somehow Justin D escaped the wrath of Tushface this time, but we're pretty sure he's going to get eliminated this week!

Next the Wanna-bes head back into the Star Kitchen to meet Bobby who is standing with Busy Phillips and Bill Lawrence of the ABC comedy, Cougar Town. Penny tells us she loves Cougar Town because she's a cougar herself. Eww. Being that she's more scary than sexy, no matter how much cleavage she reveals, I can only imagine the conversation that happens when she's too lazy to cook dinner.

"Hello, Domino's!"
"Hi. This is Penny Davidi. I'd like an extra-large hand-tossed with extra meat. Preferably that cute blonde guy who delivered last time."
(holding hand over receiver) "Hey, Josh, that scary woman who answers the door wearing only an apron and stilettos wants you again."
(Josh, runs screaming through plate glass window, never to be seen again.)

The Wanna-bes have to prepare a lunch for 150 members of the Cougar Town cast and crew, inspired by the five different groups that work on the show. This is one of the lamer team challenges since each department doesn't really have a theme to work with. The Wanna-bes start saying stuff like "oh, writers eat a lot of take-out so we'll do something really homey," blah blah blahzzzzz. I black out for a couple of seconds, only to awake in time to figure out who is in what group.

The teams get together to discuss their game plans. Right off the bat, Susie decides to make stuffed bell peppers, and she instructs Justin D, who is going to Whole Foods, to pick up ten boxes of quinoa. Whitney tells us that Justin can get "spacey" at times, so you know he's going to fuck something up. Which only reinforces the fact that he's going home this week.

While Justin is shopping, Susie calls him to remind him about the 10 boxes of quinoa. She says "ten" and he says "two" and writes it down. Although the home audience can hear the difference between ten and two very clearly, perhaps whatever corporate sponsorship cell phones they are using are really to blame? Justin can't really be that spacey, can he? 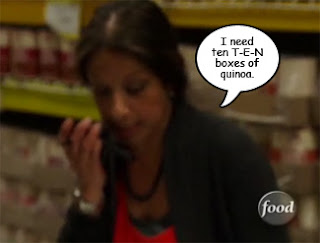 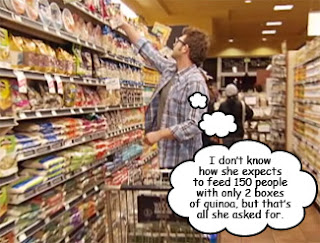 While Justin D thinks he knows what he's getting for Susie, he's not sure what he's getting for his own dish because he can't find the five ingredients he needs for his smoked trout salad. I have a hard time believing that Whole Foods didn't have radicchio, but whatever. Maybe his glasses were fogged up. Jeff was also having issues finding either ground chicken or ground turkey for his lettuce wraps and ends up buying tofu, which scares him.

The next day, Frat Boy finds that the frozen lamb shanks that he bought are still frozen, despite spending the night in the fridge. From experience I can tell you that a bunch of frozen stuff in a box isn't going to thaw overnight, as it's acting as its own ice pack. Penny and Mary Beth have decided to be all phoney-baloney to keep from killing each other. And Justin D says he's being haunted by his original salad plan even though he is now forced to make something entirely different. Meanwhile, Susie wants to know where the fuck are the other eight bags of quinoa she wanted?

Something smells like it's burning in the kitchen, but nobody can quite figure out what it is. Penny is positive her food is fine. And then, when things couldn't get any worse for some of the Wanna-bes, Paula Deen comes in to eat them all. 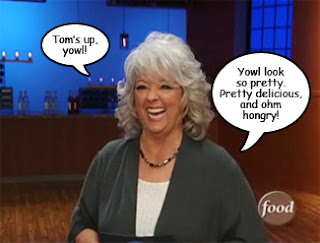 As the contestants are setting up, Bobby and Paula go around to heckle them. Paula has to point out the giant ugly holes in Curious George's ears. 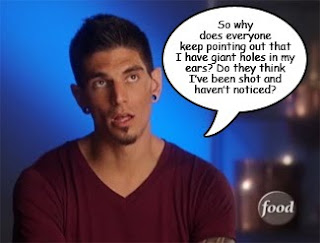 Well, dummy, if you didn't want them to be a conversation piece, then why do you have them? Surely it's not because they look good.

Time to eat - the cast and crew of Cougar Town descend on the buffet and take samples of everyone's food. While Mary Beth's meatloaf is getting raves, nobody seems to want to eat Penny's macaroni and cheese. Hmm. Jeff is desperate to get people to try his tofu dish and is putting on a hard sell. As if people in California don't eat tofu.

When everyone is seated, the teams make their presentations to the group. The Writers Team of Frat Boy and Orchid go first. Orchid sees Courtney Cox's frozen face and freezes herself. 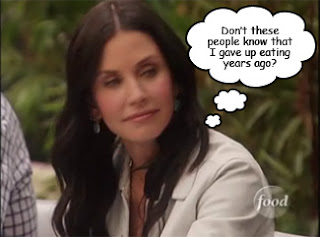 Frat Boy steps up and does the intro and Orchid finally gathers the strength to say something. Paula Deen tells us that when she saw Orchid's collards, she was prepared to be embarrassed for her, but was surprised when they were completely delicious. Now why on earth would Paula think that Southerner Orchid couldn't make good greens? Because she looks Asian? Racist any? 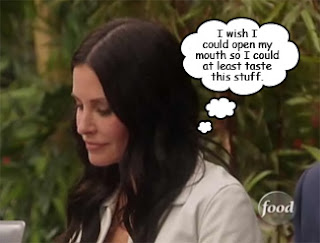 The Art Team goes next and Jeff presents his tofu dish with humor that is welcome this time. Even racistPaula Deen loves his dish. Curious George is his usual clinical self, sounding like he's reading a menu.  And then we reach the hour mark and I basically tune out the rest of the show. I can't help it - it's a self-preservation instinct.

So, anyway, eventually they stop talking and get to the judgement part of the program. None of the teams were spectacular enough to earn the win, so the Selection Committee has decided to pick one winner from each team who will be safe, with the rest being up for elimination.  But first, Bobby talks about the "elephant at the table" (guess it couldn't be in the room, since they were outside) which is Penny's mac and cheese. It was unpleasantly burnt-tasting. Frat Boy pipes in that he heard other people mention that her dish was burnt, and she immediately jumps on him with an accusation of throwing her under the bus. If you're playing a drinking game, this would be a good time to take a shot or two. 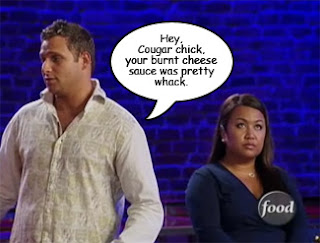 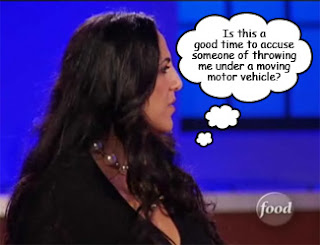 I wish someone *would* throw her under a bus. I'll drive.

Jeff, Orchid, Mary Beth, Susie, and Vic are safe. Despite not having enough quinoa, Susie's dish made Courtney Cox want to lick her plate, had the Botox not prevented her tongue from getting that far out of her mouth. Vic is finally showing that he can cook. Jeff's tofu was the best Tushface has ever eaten. The best tofu.

The judges also consider Jyll and Frat Boy to be safe and send them backstage, leaving Penny, Whitney, Justin D, and Curious George up for elimination. 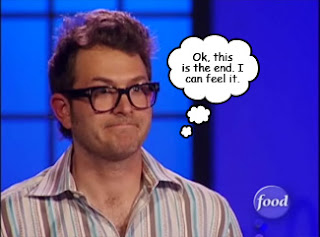 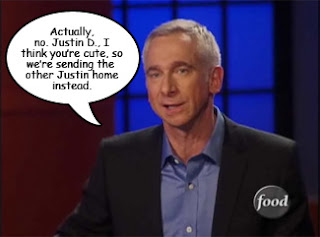 Wow - huge curveball! While it looked like Justin D was going home from the opening seconds of the show (87 damn minutes ago), Curious George gets the boot instead. Guess they just couldn't get past his clinical delivery, even if he is probably the best cook of the bunch.

Next week - Guy Fieri laughs like a drunken hyena for another fucking 90 minute episode. Kill me now.

The Roulette Table - The core pieces of a roulette table include its
signature wheel as well as a betting board. ' Luckily some bonuses are superior to
others also, since the circumstances and terms vary a
good deal between different online casinos it's really a excellent concept make use of an unbiased casino bonus review web site to locate which bonuses perform best for that player.
That is where we'll come to learn, as said before, that roulette can be a game of
chance; specifically, a betting game.