There were a handful of unwatched Bollywood movies in our collection, and of those we chose Hum Dil De Chuke Sanam, a 188-minute extravaganza from 1999 starring Salman Khan, Ajay Devgan, and "most beautiful woman in the world" Aishwarya Rai. Apparently Salman Khan has had fatwas issued against him for his un-Muslim-like behavior. Surprisingly, none of them cited his ham-like over-acting.

While the acting occasionally got pretty over-the-top, Hum's art direction was astonishing. The amount of color and pattern in every scene was quite a feast for the eyes. As for the story, it revolved around a fairly typical love triangle with aspects of forbidden love and arranged marriage, and lots of goo-goo eyes instead of kissing. (The film censors in India rarely risk offending audiences by showing lip-on-lip contact.)

And while we watched, we feasted our stomachs as well. After viewing a bit more than half the movie while noshing on the appetizer course, we took an intermission so I could prepare our entree. I had originally wanted to make a Malabar shrimp curry, but every recipe I found called for curry leaves, which I haven't seen in shops recently. Then I found a recipe on Serious Eats that sounded interesting and rather quick to cook. It was rich and delicious served over basmati rice with a side of cucumber and red onion raita. And of course I had to invent a cocktail for the occasion - made with pomegranate juice, rose water, and the new VeeV acai liqueur, dubbed the Jai Hind. 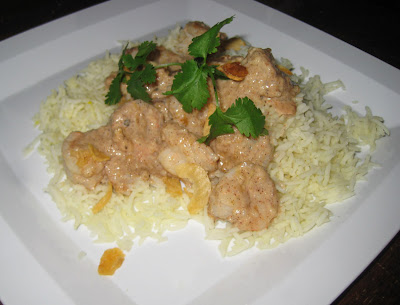 Toast slivered almonds in a dry skillet until they grow fragrant and brown slightly. Allow to cool, then grind in a spice or coffee grinder.

Pour the oil into a large skillet set over medium-high heat. Add the almonds and garlic and cook for 1 to 2 minutes, stirring constantly. Add the tomato, cayenne, salt, sugar, and garam masala. Stir occasionally and cook for 2 to 4 minutes. The mixture will seem very pasty.

Add the shrimp and the cream, stirring well to incorporate the almond mixture into the cream. Turn heat to medium and cook until shrimp are opaque. Add salt to taste. 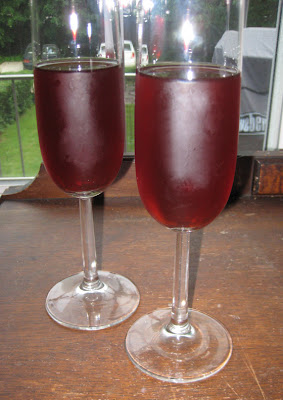 Mix all ingredients in a chilled cocktail shaker. Serves 2 generously.