Back in 2003, Turner Classic Movies had a "Hooray for Bollywood" month in which they aired twelve classic Indian films, three per Thursday night. Over a period of three weeks, Mr Minx and I watched and enjoyed Pakeezah, Rangeela, and Dilwale Dulhania Le Jayenge--the latter so much, we bought it on DVD. As our first experience with Indian cinema, we found Bollywood movies to be extremely colorful and full of glorious music, a fun and exotic escape from life in Baltimore.

At some point, I found a cheap source for Bollywood DVDs and bought several, some of which we hadn't yet watched because we hadn't found the time. (Bollywood movies are long, typically running 2.5 - 3 hours.) Recently I decided we needed to make a change from our regularly scheduled programming and planned a dinner-and-a-movie night, involving an Indian movie and home-cooked Indian food.

I didn't necessarily want to make classic Indian food but maybe something more modern, so I asked America's Next Great Restaurant finalist, Sudhir Kandula, for some ideas. He suggested that I do a simple samosa filling wrapped in puff pastry, and some vegetable fritters served with a mint sauce as starters. 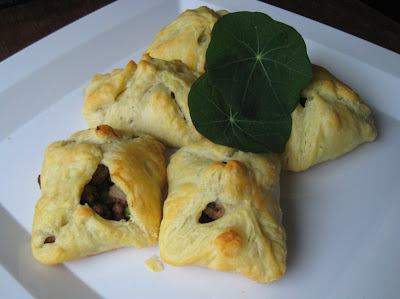 Seems like most Indian restaurants - at least the ones that deliver to Chez Minx - offer only potato samosas, and while those are fine, I prefer meat-filled ones. I decided on a filling that is essentially a dish called keema mattar, a dry mixture of ground lamb and peas, because it is simple and tasty and I could make it the day before and stash it in the fridge. The next day, I'd just have to fill and bake the pastries, leaving more time for the other components I wanted to make.

For the vegetable fritters, I used chopped cauliflower and corn, and rather than making a mint sauce, I opted to make a fig chutney. I also purchased jars of carrot pickle and garlic relish to serve with the appetizer course. Everything was delicious, and the puff pastry was a genius idea. I'm going to make these again and again. The fritters also turned out well, and I suppose they'll be added to the repertoire seeing as I have a bag of gram (chickpea) flour to use up now.

Over medium heat, cook onion and ground lamb together, breaking up clumps of lamb with a wooden spoon, until lamb is no longer pink. Drain off fat.

Stir in cayenne, garam masala, cumin, garlic powder, and ginger. Cook for about 3 minutes. Add lemon juice and peas, cook until peas have thawed, about 3 minutes more. Stir in mint. Remove from heat and refrigerate until ready to use.

To assemble samosas:
Preheat oven to 400F. Thaw puff pastry dough according to package directions. When thawed, unfold one piece of pastry at a time onto a work surface. Using a sharp knife, divide pastry into 9 squares.

Take a square of pastry and roll it out slightly with a rolling pin, enlarging it by about a quarter of an inch on all sides. Place a tablespoonful of filling at the center of the pastry square. Bring up opposing corners to meet at center, sealing edges with your fingertips and forming a rough pyramid shape. Repeat with remaining 8 squares and remaining pastry sheet.

Bake in preheated 400F oven for 15 minutes until puffed and brown. Makes 18. 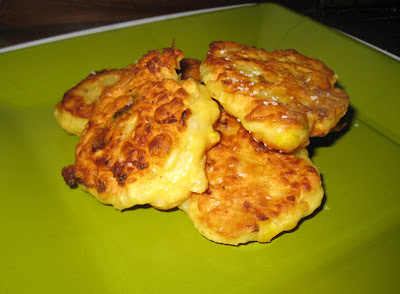 Remove outer leaves and lower part of stem from cauliflower. Blanch in boiling water for about 4 minutes until crisp tender. Remove from heat and place in an ice bath to stop the cooking. Roughly chop about 1 cup of the cauliflower and refrigerate the rest for later use.

Mix flours, cornstarch, baking powder, cumin, and salt in a bowl. Add 2/3 cup water and whisk until smooth. Add the cauliflower, corn, and onion to the batter and mix to combine. It will be very thick. 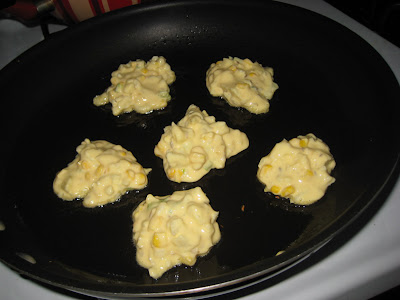 In a large saute pan, heat a tablespoon of oil until it shimmers. Drop heaping tablespoonfuls of fritter batter into hot oil and press down lightly to form cakes. Do not crowd the pan - I got about 6 to fit comfortably.

Cook over medium-high heat until bottom side has browned. Flip fritters and brown other side. Remove to a paper-towel-lined plate and sprinkle with salt while fritters are still hot. Repeat until all batter is gone.

Remove stems from figs and cut each into eighths. Add all ingredients to a saucepan and bring to a simmer. Cook until figs are soft and much of the liquid has evaporated, about 25 minutes. Remove from heat and allow to cool. When cool, refrigerate until ready to serve. 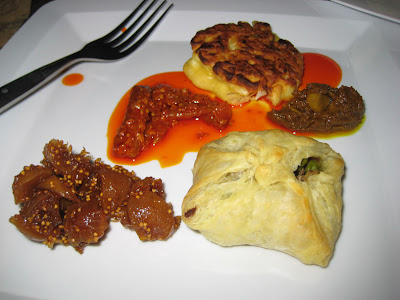