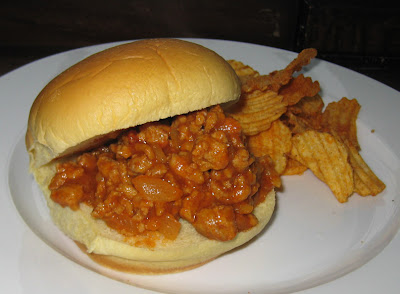 When I was a kid, my mom would make Sloppy Joes once in a while, using a can of chicken gumbo soup and some basic condiments. I enjoyed it, and I didn't - I thought the gumbo soup (which tastes nothing like actual gumbo, by the way) tasted odd. But...that's the only choice we were given; we tried Manwich exactly once, Mom hated it, and that was that.

Sloppy Joes seem like a pretty no-brainer idea for a quick weekday dinner, yet Mr Minx and I have made them about twice in the past 12 years. Recently, I spotted a can of Campbell's Chicken Gumbo Soup at the soon-to-disappear Superfresh. It was "light," but since I hadn't seen this soup in years, I thought it might be nice to use it to make a healthier version of my mom's old recipe.

Excited about the prospect of tasting something from my youth, imagine my surprise when I dumped the can of gumbo soup into the skillet only to find that it contained rice. (I didn't remember the original containing rice, but according to this, it does.) Rice, some orange-ish stock, bits of what appeared to be bell pepper, and not a whole lot else. Not even flavor. With the addition of ketchup and mustard, the turkey mixture tasted like...ketchup and mustard and nothing like the flavor memory I've been carrying around in my head for 35 years or so. At that point, realizing I was not going to have a madeleine moment, I decided to doctor the Joe, adding much-needed spice and some sweetness other than ketchup.

The result was pretty good, definitely sloppy, and ultimately nothing like Mom's. Sigh.

In large skillet over medium heat, cook onion and turkey, breaking up turkey with edge of a spatula, until meat is cooked through and beginning to brown, about 8 minutes. Turn up heat and stir in ketchup, mustard, soup, water, Sriracha, paprika, garlic powder and maple syrup. Bring to a boil, then turn down heat and simmer for 30 minutes, until meat is tender and much of the liquid has evaporated. Serve on hamburger buns.