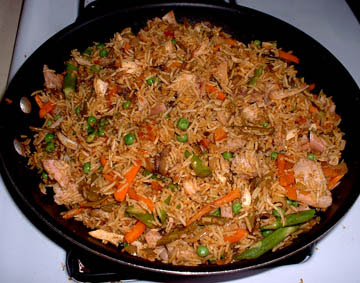 I've heard about meat hangovers, but never experienced one for myself until this morning. Last night, DH, DB, and I went to Greenfield Churrascaria in Rockville. DB had a gift certificate that he had received for Christmas and wanted to use before he had the opportunity to lose it, and DH and I were happy to assist him.

The restaurant is huge, seating many hundreds of people, I am sure. There is a large salad bar featuring everything from arugula and watercress to marinated mushrooms to pasta salad. There are soups including a nice seafood bisque full of squid tentacles, and a selection of Brazilian favorites like yuca and feijoada. That's all well and good...actually not that good. The salad bar selections are mediocre at best, but hey, the real reason to go there is the MEAT. Lots and lots and lots of meat.

Last night, we indulged in cholesterol-laden goodness. We had sausage, turkey wrapped in bacon, pork, lamb, and several different cuts of beef. My favorite was the short ribs, something we had never seen there before in all our many previous trips. It came around last, after DH had already declared himself "done for" and I was close to bursting (but was considering one last trip to the salad bar for some deep fried bananas, as "dessert") and could well have been the straw that broke the camel's back. But it was damned good, tender and flavorful. As was all the meat. Well, not all was tender - the flank steak was a bit chewy, and the pork was a little tough - but all had tremendous flavor. Everything was a tad on the salty side this trip too, as I couldn't stop drinking water, and had to chugalug a big glass of it when I got home.

Drinking so much definitely had its drawbacks. It's unfortunate that a restaurant so large would provide a mere two toilets in the ladies' room. It is also unfortunate that a large birthday party in our section would have small children running around. On my trip to the bathroom, I found that two little girls from that party were busily stuffing seat protectors into one toilet and emerged from the stall with "don't go in that one - it's flooded." The other stall contained what seemed like a small army of children but proved to be one extremely overweight child and her equally porky mother taking turns stinking up the place. As I waited, several other people, children in tow, entered the bathroom, so I left in a huff to use the bathroom in a nearby McDonald's. (Like I needed more reasons to dislike children....)

Anyway...I awoke in the middle of the night with a raging headache. Three ibuprofins and a couple of aspirin later, I still have it.

Meat hangover. It's not quite as bad as some alcohol-induced hangovers I've experienced in the distant past: I can hold my head up, and light isn't bothering me too much. But it's quite unpleasant and highly not recommended. I'm still trying to decide if it was worth it. Maybe tomorrow my overindulgence will seem a better idea.
Posted by theminx

I don't know how Tony Bourdain does it. Drink all the weird native rotgot that he's offered in every foreign country he visits, I mean. Last night at a Chinese hot pot dinner, I had a shot of Jiugui, a distilled liquor made in the western part of Hunan province, from spring water, sorghum, glutinous rice, and wheat. Ack! That was some strong stuff! It was 106 proof, clear as water, and had a sweet, somewhat root-y flavor from the sorghum.

A shot of that (sipped!) and two glasses of red wine was not enough to get me drunk, but I had a hell of a headache this morning!

Drink at your own risk!
Posted by theminx No comments: