June has just begun and it's already HOT. When the weather is steamy, I want to eat food that is cool or room-temperature, salady stuff. But interesting salady stuff - a bowl of lettuce and cucumbers with dressing just doesn't cut it most of the time. This weekend, I found myself with about a third of a loaf of Atwater's olive bread and decided it would be perfect in a bit of panzanella. Typically a combination of tomatoes, bread, cucumbers, and onions, this Italian bread salad can also involve more savory elements like olives, capers, and fresh basil. Our basil (five types) is growing like gangbusters, so I used three different varieties, along with some fresh radishes and a bed of baby spinach. And of course there's a man in the house, which meant it was imperative that I add a protein. A handful of frozen shrimp from the omni-present bag in the freezer did the trick. 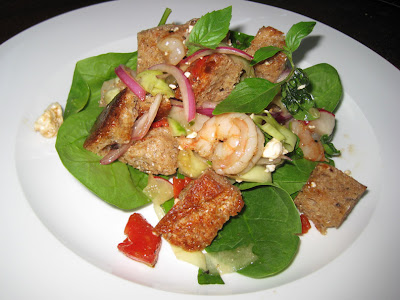 The result was colorful, refreshing, and full of summertime flavor. The various textures were also quite pleasing - the crunch of the bread, the snap of the shrimp, the soft cheese. This salad is something I want to eat on a regular basis.

Heat large saute pan. Add a splash of olive oil and the minced garlic. Stir garlic into oil and toss in croutons, tossing to coat with the garlic oil. Continue to toss until cubes start to brown slightly and garlic is fragrant. Remove to a bowl and set aside.

Add another splash of olive oil to the hot pan and add the shrimp. Cook until shrimp are opaque. Remove to a bowl to cool.

Make a vinegar-heavy vinaigrette with about 2 tablespoons of balsamic, 1 teaspoon of honey, and 1 tablespoon of EVOO. Add a dash of salt and pepper and emulsify (beat well) with a fork. Pour over vegetables in bowl. Add bread cubes and shrimp and toss well. Stir in cheese and basil.