Occasionally I get a real pang of nostalgia for my grandmother's cooking.

Grandma lived with her son, Frankie, my uncle, in the downstairs apartment of our house in Fells Point. My immediate family - Mom, Dad, and my brother - and I lived upstairs. While Mom made dinner most nights, Grandma occasionally gave her the night off by cooking for the house. By the time I came along, Grandma had stopped making more complicated Polish specialties like gołąbki, pączki, krusciki, and pierogi, and pared her culinary repertoire down to a fairly limited number of things - smothered pork chops, kotlety, placki - most of which were cooked in a heavy cast-iron skillet. Some things she made in a big, white, enameled stock pot. Among these were her rosół, szczaw, and spaghetti and meatballs. The latter also required the skillet and was one of the few dishes she made that used more than one pot. 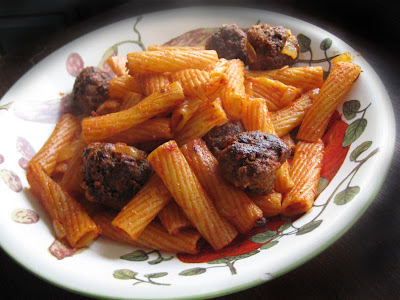 My Uncle had rather plebian taste in food. The only time we ever ate Kraft Macaroni and Cheese was when he requested it. He also liked to eat canned shrimp sautéed in butter with lots of chopped onions. It was incredibly salty and screamed out for an accompaniment of rice or other starch, which occasionally was mac & cheese, but was most often merely buttered rye bread from the giant loaf we always had on hand. My Aunt Stasia's spaghetti and home made meatsauce and meatballs was too fancy for Frankie, but he loved Grandma's plain Jane version. I did too. There was something very comforting in her seven-ingredient recipe, and on a recent evening, I recreated it.

Although she normally used ziti and occasionally rigatoni, we always called it "spaghetti."

Form ground round into balls the size of a quarter. Fry in vegetable oil until dark brown on all sides. Set aside.

In the same pan in which you cooked the meatballs, sauté onions in butter until translucent and very slightly browned.  It's very important that you use all 4 tablespoons of butter and lots of onions - these are the major flavor components for the sauce. 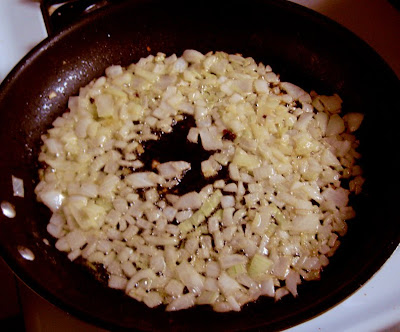 Stir in tomato paste and cook for a minute or two. The sauce will be very thick. 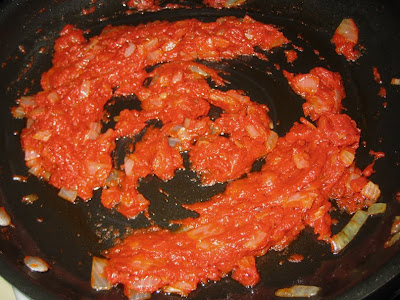 While onions are cooking, cook pasta in boiling salted water until al dente. Drain and place pasta back into its pot.

Pour sauce over pasta. Add meatballs. Mix well over low heat until everything has a thin veil of tomato paste. Salt generously.

Sure, you can get fancy and add cheese or basil or whatnot, but it won't be my Grandma's pasta.

I usually sauté things in olive oil, so when the onions hit the butter, it immediately took me back to my childhood, when most meals started out exactly that way - onions cooked in butter. And when I added the tomato paste, it just smelled so right. As I ate it, I was able to revel in a little bit of my childhood, something I'll never recapture time-wise, but can always remember with food.

So her recipe sounds nice
(and simple ;-)
Lets all make some
Minx Gma Sketti !

Agreed, it's a very nice post. And who can't relate to fond memories of comfort food from one's youth? My mother's spaghetti and meatballs recipe is the only way I'll eat that dish. Nothing else (especially not sauce from a jar, yuck!) can even come close.

Thank you for sharing this with us!