This Spring, the Minxes made a pact to dine in one new-to-us restaurant a month for at least the rest of the year. We had every intention of getting to The Chameleon Cafe in June or July, but then other dining opportunities presented themselves. Then August rolled along, bringing with it Restaurant Week and the perfect occasion to make sure we dined in at least a few places which we hadn't before tried.

On Saturday the 14th, we celebrated MinxEats 5th Blogaversary with a lovely dinner at The Chameleon Café, located in a rowhouse on a stretch of Harford Road that we would otherwise have no need to traverse. We were greeted by cheery staff dressed all in black, a stark contrast to the blue-trimmed bright gold walls of the dining room.

Although I want to try the charcuterie plate at some time, Mr Minx and I both stuck to the Restaurant Week menu. As is usually the case, we had a difficult time choosing between several tantalizing appetizer options. Mr Minx settled on the featured soup, a chowder of George's Silver King corn, Briedenbaugh potatoes, and Krakos smoked Polish sausage simmered in duck stock. 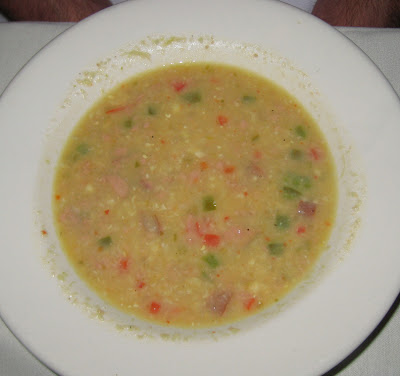 The combination of smoky kielbasa and bell pepper made the dish seem more like a gumbo than a chowder. However, the additional ingredients happily did not detract from the corn flavor.

Having never tried the potted meat dish, my choice was the Rillettes Sarthoises made from Ferguson Family Farms Berkshire Hog. 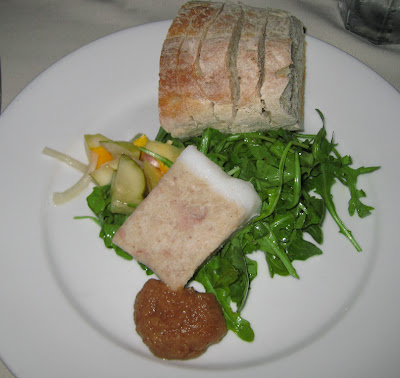 The paté-like concoction of pork and pork fat was simple and rustic and cried out for some good crusty bread. Unfortunately, the restaurant's bread had a rather feeble crust and too-crumbly texture, making spreading the rillettes without tearing it a bit of a challenge. Among the three tangy accouterments, which included applesauce and lightly-dressed arugula, I enjoyed the sprightly pickled cucumber, yellow squash, and peach the most. 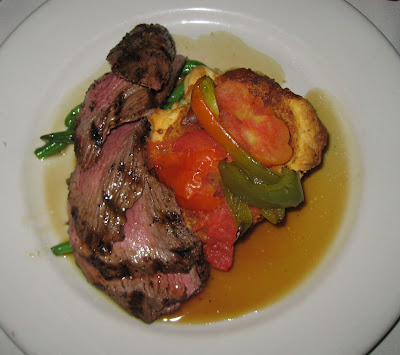 Mr Minx's grilled bistro steak "Baltimore" with corn soufflé and Chateaubriand sauce arrived cooked to the requested medium-rare; the generous portion was tender and juicy. The accompanying corn soufflée seemed to be encased in a puff-pastry shell, like a tart. Odd, but the crisp crust added a bit of texture to the dish along with the snappy green beans that were hiding under the meat. A simple, hearty dish, yet not inappropriate for Summer dining. 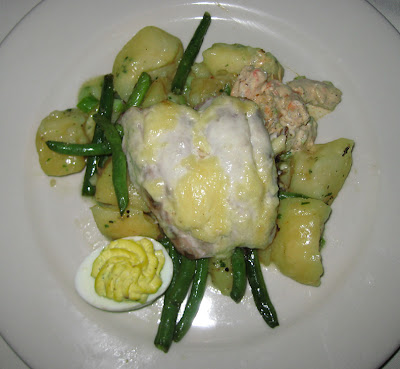 For my entrée, I chose the broiled bluefish with lemon mayonnaise, shrimp salad, deviled egg and warm potato salad. The combination of hot and cold elements was like a bit of fine dining crossed with a picnic.

There are vague memories of a rare childhood family dinner that involved a whole fish (rather than the usual fish sticks Friday or tuna from a can). I had it in my  head that it was bluefish, but after tasting my dish, I knew immediately that it was probably something else. Today's fish had a lovely shellfish-like iodine quality, and the hollandaise-like lemon mayo gave an impression of crab imperial.

The other items on the plate were fine, particularly the warm potato salad.

For dessert Mr Minx had the smearkase, typically a dry cheesecake baked in a cake crust. The Chameleon Café's version was creamier and a far cry better than any version from the old Baltimore bakeries- Muhly's, Mikulski's - that my family patronized. I had a plum and almond tart that had a nicely tangy filling on a sweet nutty crust. Both desserts were garnished simply with a drizzle of raspberry sauce and a spoonful of softly whipped cream.

Overall, a solid meal with a few pleasant surprises, including the very solicitous and attentive staff. Next time, we try the charcuterie!