Mr Minx usually does all of the cooking during the week, and I take over on the weekend. Last weekend, however, I had no idea what I wanted to make. Well, I had a vague notion, but nothing clear cut. I knew I wanted to toy with something that I might enter in a recipe contest, but that dish was more of an appetizer than an entree. Then I opened the magic freezer, which was full to capacity, and rummaged around a bit.

We had bags of scallops and langoustine tails from Trader Joe's. And tons of other foodlike substances, but none of it evoked any sort of inspiration.

I desperately needed a pedicure, so took a walk to my friendly neighborhood nail salon. On the way back, I stopped in the Giant in the same shopping center and picked up some watermelon and feta cheese with which to make a salad, and some claw crab meat that was on sale. And a baguette because the appetizer dish was going to be a bruschetta. But still no ideas.

Once home, I farted around on the computer a bit, flipped through some magazines, admired my nails, and eventually realized that it was getting late and I had to think of something pretty quickly. By that point in the afternoon I had gotten lazy and didn't really want to turn on the stove, but we couldn't just eat bruschetta. Well, we could, but Mr Minx would have been cranky about it.

So I defrosted some seafood and made seviche. The only cooking I needed to do was with the scallops, as I wasn't trusting citrus juice and limited time to "cook" them properly. The crab and langoustines were precooked and ready to go. After whipping up a dressing, I tossed in the shellfish and stashed the bowl in the fridge for an hour or so. Mr Minx still seemed a little cranky about not getting a hot meal with the usual protein/starch/veg components. Until he tasted it. And then our oddball dinner didn't seem so bad.

The end result was pretty as a picture. 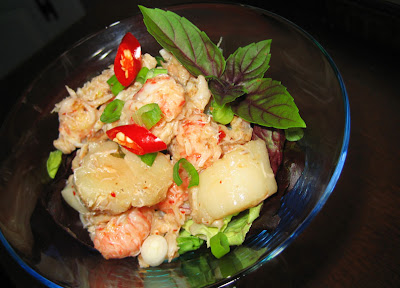 Refrigerate for at least half an hour up to 3 hours.

To serve, remove seafood from liquid with a slotted spoon into a glass or bowl, lined with soft lettuce leaves if you'd like. Garnish with Thai basil, scallions, and chile slices.