At La Maison de Top Chef, the morning after Restaurant Wars, we see Amanda in the kitchen playing with several bags of Seattle's Best Coffee, as if she either can't figure out how to open them or how much coffee to use. And Kevin tells us what he thinks about the last elimination. 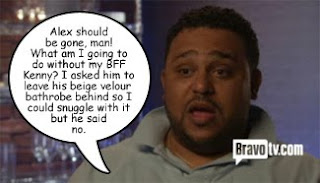 Guess Alpha was just not that into you. 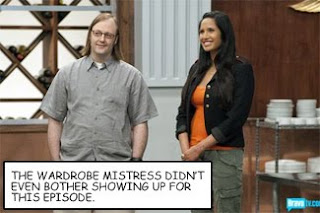 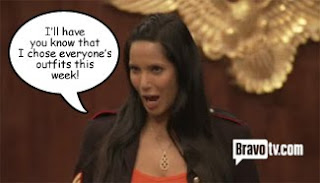 Chef Dufresne has become quite the fixture in Top Cheflandia, what with regular appearances in several seasons along with a stint on Top Chef Masters. This time, he's here to judge a game of Mystery Box, a challenge that resembles the Food Network show, Chopped, albeit with no asshat judges like the great chef Scott Conant, or the perpetually-cranky Alex Guarnaschelli.

Each cheftestant must take the three ingredients currently in their Mystery Box and incorporate them into a dish. But wait - there's more! 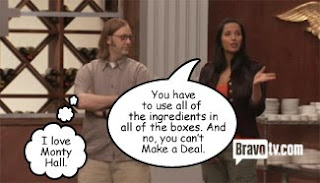 During the forty minute cooking time, more Mystery Boxes will be introduced, each containing ingredients which must be used. To add to the stress, this is a 10K High Stakes Challenge. 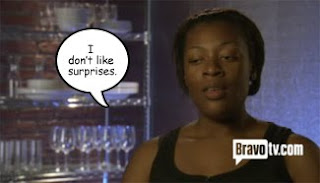 The first box contains a rockfish, a bowl of fava beans, and an unlabeled can. The cheftestants immediately start a game of "keep the can opener away from Alex" because at this point in the competition, everyone hates him. Everyone except Amanda. Who's not exactly anyone's favorite, either. 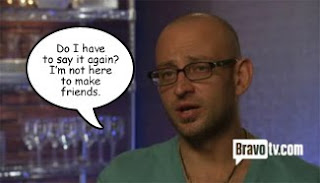 The can happens to contain hominy. While the chefs play with their fish and favas, another box is brought in containing squid and black garlic. 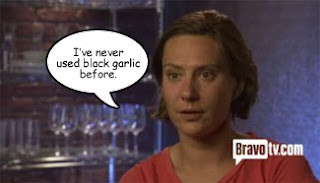 Sweet jebus - I've got some black garlic at home, Kel, and I'm a lowly food blogger. You know, the people chefs hate because we are occasionally more knowledgeable dare judge their cuisine.

After a few brief moments of panic in which some of the cheftestants must switch gears, another box comes in, containing passion fruit and ramps. 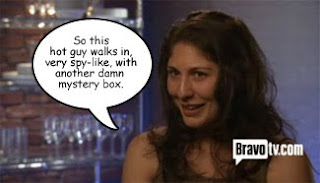 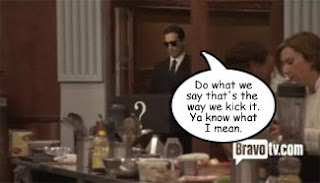 The man in black comes back with a third box that adds jicama to the mix. 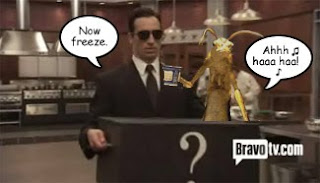 Meanwhile, Inigo is feeling a bit down on himself. Now that his biggest challenger in the Testosterone Olympics has been ousted, he's got nobody to play with and is at loose ends. 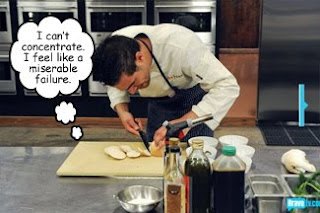 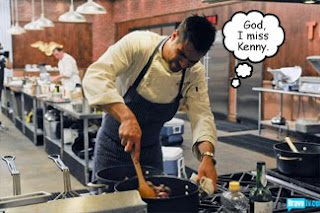 Not only that, he's seasoning his food with his sweat. In fact, they're all doing a Howie Kleinberg because this challenge involves a lot of running around for ingredients and utensils and whatnot. On the plus side: nobody has to go to the gym later!

Time's up! Mystery Boxes down!

Padma and Wylie go around the room and taste the chefs messes dishes. They've got to be worse than any concoction from Chopped, being that there were eight mandatory ingredients, but Wylie and Padma seem pleased with the majority of them. But then again, they're no Scott "Raw Red Onions Suck!" Conant or Amanda "Shrimp Poop" Freitag. 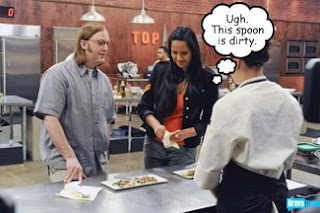 However, Alex's and Amanda's dishes are bad enough to end up on the bottom, with Tiffany and Kevin finishing on top. Tiffany really brought all of the disparate ingredients together in her fish stew, which had a flavorful broth that tasted like ten thousand dollars. This makes the second High Stakes QF that Tiff has won, giving her plenty of money to pay for her upcoming nuptials. 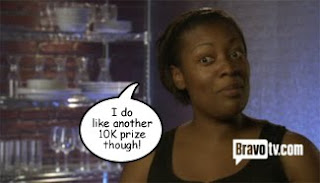 Padma then lies to the gang and tells them that they have been recruited as "special agents" for the CIA. I'm thinking that, "special," used here, means "short bus." Their mission: to take classic dishes and "disguise" them. However, after taking on a new identity, the dishes must retain the same flavors as the original.

After drawing knives, we see that: Amanda gets to put a funny mustache on French Onion Soup; Inigo has to put a trench coat on Beef Wellington; Kelly gets to put a wig on Kung Pao Shrimp; Alex has to find some funny glasses for Veal Parmesan; Kevin must find a beige velour bathrobe for Cobb Salad; Ed gets to make a mask for Chicken Cordon Bleu; and Tiffany must buy a fedora for a Gyro.

The cheftestants will be serving their food at CIA HQ to none other than Director Leon Panetta and some of his minions. Even more fun: the winner of this battle will receive a trip to Paris, courtesy of Hilton Hotels.

The chefs then race to Whole Foods with $200 to spend in 30 minutes.

While shopping, we find that Alex has only six years of culinary experience. He thinks this gives him an advantage because he's open to new ideas. Before becoming a chef, he was a professional videographer who had taken thousands of hours of wedding footage. I'm betting that Tiffany isn't hiring him to take video at her wedding.

We also find out another thing with which Kelly is unfamiliar: 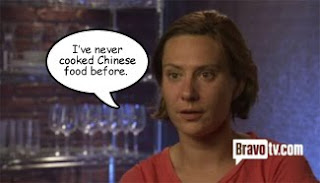 And of course I have. Hey Kel - call me. I can recommend some cookbooks and sources for black garlic. Or you can ask Inigo; Kevin seems to think that he always cooks Chinese food.

We also watch as Inigo buys puff pastry, which makes all of the other cheftestants say, "awwwwwwwwwww!" under their breaths like school children. Ed comes right out and says that ol' patchouli-smellin' John did the same thing and look where that landed him (in the sequester house for the last 4 weeks).

Back at the Top Chef Kitchens, the cheftestants have 2.5 hours to prep. Amanda tells us she's excited about the challenge and would love to be a spy named Natasha who carries a .22 in her garter. 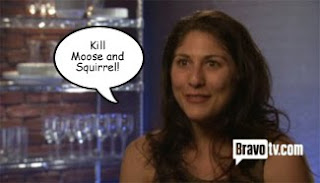 (Yeah, I know. Before her time. And probably yours, too.)

The next day, the chefs march into the CIA HQ in Langley, VA. There they have 1.5 hours to cook in the pristine kitchen. 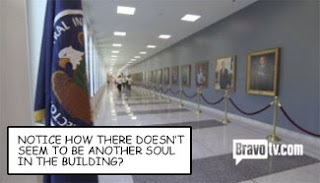 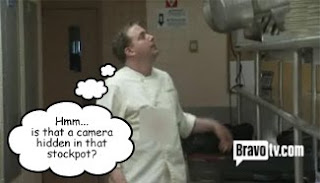 Kelly has decided to make Kung Pao Shrimp soup. As she completed the majority of her dish back at the Hilton, she really only needs to cook her rice and prepare some tempura garnish. She's confident that she's got plenty of time. A damn good thing, because she cooks her rice for an hour, until it becomes a big pile of mush. She panics to Tiffany who assures her that she can use the remaining 30 minutes to cook another batch. 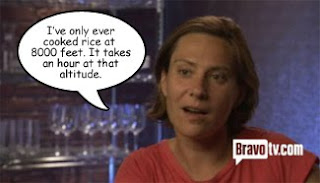 If you had said, "I've never cooked rice before," I would have screamed.

While the chefs are scurrying to finish, the guest diners arrive, including CIA staff, Director Pinetta, and Eric Ripert standing in for Gail and the Girls. Up first are Inigo and Kelly. Inigo has chosen to turn his Beef Wellington into a poorly-executed pizza. Director Pinetta says as a disguise, it sucks as "they would’ve captured this individual and hung him."


Inigo is despondent over his lackluster performance and says it would be traumatic to go home. 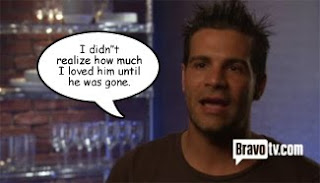 I'm betting Alpha wasn't that into you, either.

Kelly's Kung Pao, on the other hand, is a nice spin on the dish, even if the diners seem to think that it's Pad Thai.

Pad Thai, Kung Pao. It's all the same, right Kevin?

Tiffany and Kevin present their dishes next. Tiffany made the most elegant version of a Gyro that Eric Ripert has ever tasted. Kevin didn't change his Cobb salad much, as it still was pretty much a salad, but Tom likes it.

Padma and Pinetta are chatting about the dining room when someone hands a note to the Director who immediately apologizes and leaves the room. He's apparently not enjoying his date with Ms Lakshmi and has found a clever way to get out of it.

Amanda and Alex present their dishes next. While Amanda's French Onion Soup transformed into consomme with oxtail marmalade was a good idea, it was far too sweet. And disguising soup as soup really is not even as good as wearing a fake moustache. Alex's Veal Parm is well-disguised as some of the diners guess that it's lasagna, but the meat is tough and not flavorful.

Finally, Ed brings out a croquette version of Chicken Cordon Bleu, which Tom calls "obvious" but they all really enjoy the flavors.

Later, we see the chefs stewing in the Stew Room. Padma crawls in and feebly requests the presence of Tiffany, Kelly, and Ed at Judges' Table. These three had the best dishes of the evening: Kelly's captured the flavors of Kung Pao; Ed's chicken was perfectly cooked; Tiffany's dish was elegant. So elegant, she is awarded the win and a trip to Paris including airfare and accommodations. Honeymoon, here she comes! 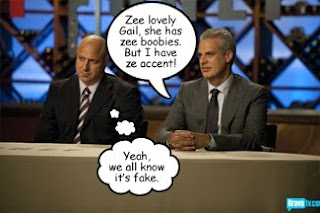 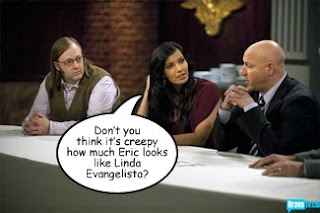 Back in the stew room, Tiffany announces victory and calls out Amanda, Alex, and Inigo.

Inigo's was too obvious, plus his pastry was dried out. Alex disguised his dish with poor execution - this was the wrong time to do something out of his comfort zone, although Wylie Dufresne did appreciate his ideas. And Amanda failed with both her disguise and her execution.

And now comes the moment you've all been waiting for, at least since that whole ridiculous thing with the pea purée: Alex is asked to pack his knives and go. A bit of a relief, because the hating was getting on my nerves already. 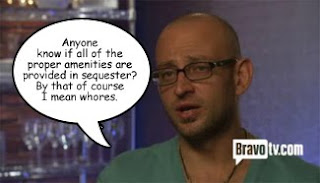 Next week: Take me out to the ball game!
Posted by theminx

I have a couple of questions:
What are ramps?
Why do you call Angelo "Inigo"?
Is a "lowly food blogger" lower on the food chain than a "digital drag queen?"

Ramps are a kind of onion.

You obviously didn't watch/read the first episode/recap in which Angelo says "there will be blood" and I was immediately reminded of Inigo Montoya.

I know nothing about hierarchy between different types of media personalities, but I do know that most of mainstream food writers and chefs look down on food bloggers.

Had to Google Inigo Montoya but at least I get it now!!!

Drag Queens are notoriously ditzy... sometimes you gotta spell it out for us!

Oh, but won't we all miss that exciting finger-pointing purloined pea purée puzzle!?

I just can't keep up anymore! Now it's Wednesday and I'm finally getting to read this! Aaaaaa.

Mad props for the Will Smith reference. Took me a while to get it, since I've never seen anything he's ever done. Had to work from context. Ha!