I've been wanting to check out Jack's Bistro in Canton for a couple of years now. I'd add it to my short list of places to visit during Restaurant Week, but Mr Minx never seemed to be interested. This time, however, there was interest, possibly caused by the term sous vide that featured prominently in two entree offerings. Finally an opportunity to try this technique that we've been hearing so much about!

According to their Web site, Jack's doesn't take reservations for small parties, so Mr Minx and I made sure to get there early one evening to guarantee a table. Wise decision, as there were several other parties interested in eating before 6pm. Immediately upon entering the corner rowhouse in which Jack's is located, I was confused. There's a vague hipster vibe to the place, but it's a bit muddled. Exposed brick walls were decorated with pseudo-retro 60s prints, and the B-52s were playing on the sound system when we came in. The servers all wore somber black, but the very effusive hostess didn't seem dressed for the occasion. What does this have to do with Three's Company, the 70s sitcom that inspired the restaurant's name? Or the very slick-looking black-and-white logo?
Absolutely nothing. With logom on the menu, a Swedish street snack comprising a hot dog, shrimp salad, and mashed potatoes in a tortilla, let's call Jack's Bistro eclectic.

Chef/owner Ted Stelzenmuller was one of my fellow judges during a recent battle of the Mason Dixon Master Chefs Tournament. (Although I could see him through the pass, I didn't alert him to my presence.) After hearing his critique of other chefs' food, I was curious to see what he could do with similar ingredients. With that in mind, I made sure one of us ordered the sous vide duck breast.

But first, we started off with a cocktail and a beer - the Camden, made with rye and orange, and a Brewer's Art Ozzy.

And then appetizers. I vacillated between the poutine and the mussel salad, with the latter winning out. 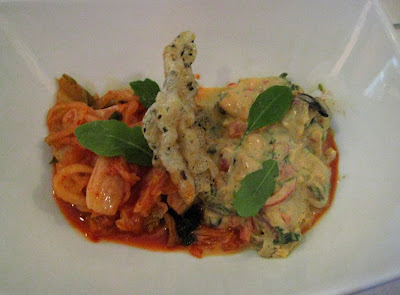 This dish was an odd juxtaposition of Korean and Thai flavors, however both sides were successful. The curry could have been both hotter and fishier, but there was no mistaking the very Thai flavor of kaffir lime. The kimchi was nearly perfect to my tastes - more fresh than fermented - but it, too, could have been spicier. Each of the two elements would be a good introduction to Korean or Thai food for the novice.  Together, however, they seemed more competitive than complimentary. 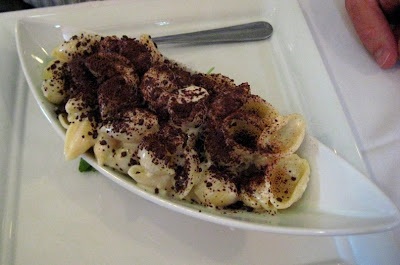 As suspected, this was mostly weird.  It is aptly named, however. This dish is definitely mac & cheese "& chocolate" and not "chocolate mac & cheese."

Despite its almost universal popularity, chocolate can't be added willy-nilly to just any recipe. Its distinctive flavor is sometimes hard to integrate, and it basically just sat on top of the pasta. While the chocolate was pretty obvious, the cheeses were a little more difficult to discern. The taste was pure cream, apart from a slight smokiness in the background. I would have liked the smoky flavor to be more pronounced - perhaps it would have allowed the dusting of dark chocolate to be better integrated.

By the time we finished the dish, the chocolate had melted and become part of the sauce. This worked a bit better, but overall the dish is mostly a novelty. 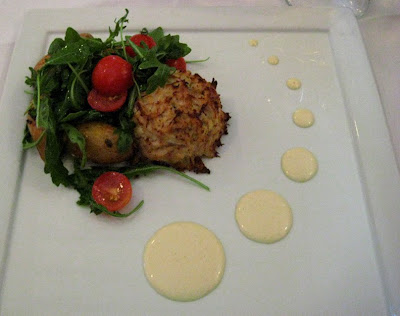 No complaints here. This was a solid, fairly traditional, crab cake with lots of crab and little binder. The fingerlings were perfectly cooked and piping hot, and the creamy mustard sauce was a pleasant accompaniment, although the crab cake was so good, it didn't need a sauce at all. I only wish there had been a little acid on the salad. 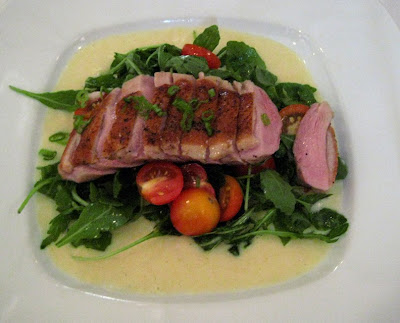 Sous Vide Duck Breast - White corn, sour cream sauce, arugula and cherry tomato salad
The duck was our very first taste of meat that had been through the process of sous vide. While visually gorgeous, the dish didn't thrill us. Duck is one of those very versatile proteins that can be eaten rare or long-cooked. It's fabulous seared, or roasted, grilled, or stewed. Duck is poultry, and has a similar texture when cooked to turkey or chicken, although I would say the flavor is unlike either. This particular duck breast, cooked sous vide, didn't seem very duck-like at all. In fact, the texture was terribly close to ham - squishy and pink all the way through. It didn't even taste like duck. And I like a crust on my meat, thankyouverymuch; if this is what sous vide does to it, well, I'll pass, thanks.

A crisp bit of skin might have helped, but we were denied that. The corn and sour cream sauce also didn't help. It was so bland, I had to taste it a few times to really notice any corn flavor. Mr Minx and I had some white corn recently that was completely flavorless, and once again I will wonder out loud why people in this region insist on eating this insipid vegetable.

The arugula and tomato accompaniment were fine, but a little too repetitious considering I had the same things on my plate. 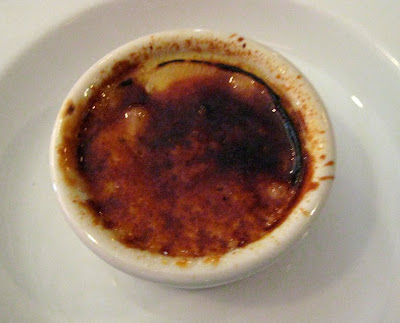 Finally, we come to dessert, and the main reason I wanted to eat at Jack's during Restaurant Week: the durian creme brulée. Neither Mr Minx nor I had ever tried the stinking fruit and we were very curious. I half expected to experience the proverbial reek of gym socks when we walked in the front door, but alas, the odor was well-contained. So well, in fact, that raising the pudding to my nose and sniffing it gave no indication that it contained anything other than cream and sugar.

Our waitress described the dessert's flavor as being mostly like a normal custard but with a weird garlic/onion background, but, to me, the durian flavor was more akin to something rotting. Rotting in a somehow pleasant way. The more I ate, the more I liked it. Apart from somewhat runny custard (I'm a firm believer in chilling the custard after bruléeing, as well as before, to re-harden any melting), this was shockingly good. 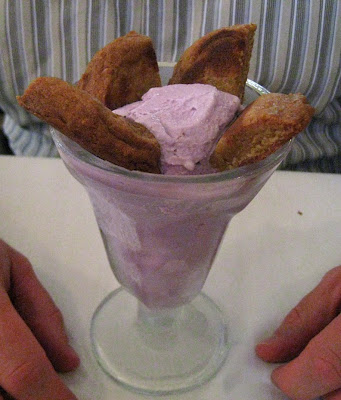 And then we have Mr Minx's shocking pink dessert. While the first bite was rather like eating a bar of soap, the rosemary-meets-perfume-like flavor of lavender grew on us after several tastes. The fresh-from-the-oven sugar cookie, reminding me of a chip-less Toll House cookie, was dreamy.

Mr Minx went so far as to say this was his favorite dish of the night. But then he doesn't like ham.

So, Jack's Bistro. Interesting. Eclectic. A couple of pretty good dishes and a couple that had unreached potential. And sous vide duck. Despite the duck, I'd go back to try some of the items from their non-Restaurant Week menu, like the ground bacon burger, the poutine, and maybe even that hot dog with shrimp salad on top.
Jack's Bistro
3123 Elliott Street
Baltimore, MD 21224
410-878-6542

Thanks for the recap! I was going to choose Jack's as my RW choice, but got a tummy bug that day and had to stay home. You pretty much chose exactly what I would have liked to try, so I lived vicariously through your post! I'm a bit sad about the chocolate mac + cheese being somewhat of a novelty - that dish is so hyped up around here, I thought it was supposed to be some kind of new foodie revelation. Oh well :)