Last night was the long-awaited finale for the Next Food Network Star. Actually, that's not true. I've been enjoying this season quite a bit, much more so than Top Chef, and am kinda sad to see it ending.

In any case, we find our three remaining Wanna-bes in their suite, getting ready for the day. They will be filming the "pilot" (actually a three-minute clip) for their own potential show on the Food Network. This makes Tom a bit nervous and kinda barfy. (He must have been snacking on some of that clam French toast from the Iron Chef challenge.) 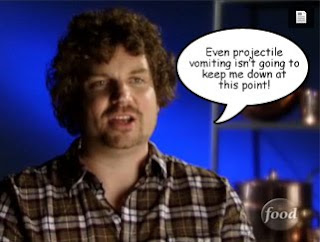 Herb is putting a lot of pressure on himself to win this competition. He didn't come this far to lose, his family would disown him, he'd lose his gym membership, etc. And Aarti is trying to keep the old "I am not worthy" demons from making a reappearance. But we know they will, even if Food Network has to edit them in.

As they reach the Food Network Studios, we hear Tom remark that it is "ground zero," which I found a tad disrespectful. True, many a disaster has emerged from this building (Dipshits, Douchebags, and Dingleberries, and Semi-Ho-Made Cooking, two name but two), but none with quite the same magnitude of that fateful site further downtown.

In the FN Kitchens, Rachael Ray bounds up to the Wanna-bes... 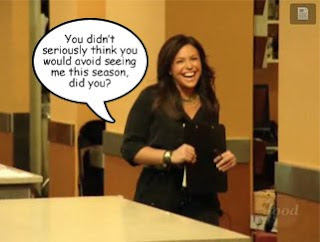 ... quite possibly scaring the bejesus out of them. I know I shrieked a little inside, and I watched the previews. 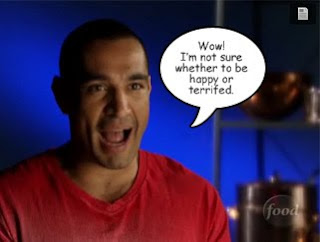 She then announces that she will be taking a huge role in the production of their "pilot."

Before getting on with the shows, RR does a short consult with each of the contestants. First she talks to Aarti, who is "geeked out" to work with RR. (Me, I'd just be extremely annoyed to be in the same room with her.) 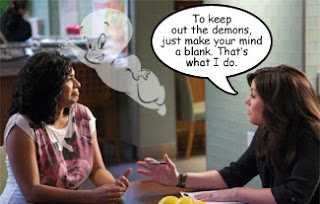 All three Wanna-bes chat with Rachael about the dishes they plan to prepare on-camera and how they fit in with their POV.

Meanwhile, there's a huge crew of cooks and production assistants who take care of all of the behind-the-scenes stuff. The on-air talent really doesn't have to do anything but look at the camera and talk, so I don't know why the contestants were put through so much cooking during the course of the competition. Lord knows Sandra Lee doesn't do any actual cooking.

Herb gets to face the cameras first, on Melissa D'Arabian's cluttered set. Predictably, he gets tongue-tied and messes up the first take by talking about himself too much. After wasting two of his allotted three minutes, he then takes an additional five to finish his dish. 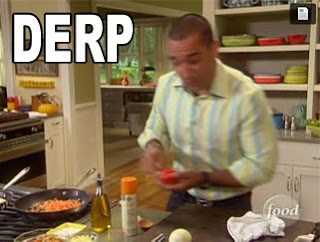 After thirty or forty more takes, he gets the idea to tape photos of his kids and wife to the camera. As if he's talking to them, see? And he won't even notice that ginormous lens thingy or the lights or the director dude holding up the "30 seconds" card. And he'll be less nervous and finally get this taping over with. It seems to work and he manages to put together three somewhat-coherent minutes. 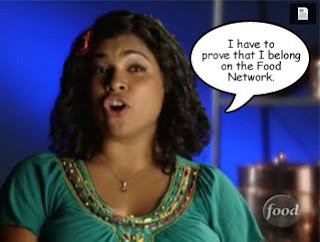 You manage to be bubbly and cute and informative without being a complete annoyance. Surely you are better than Food Network material?

Aarti tells us that Rachael Ray is the reason she started cooking. I'm guessing she watched a couple episodes of 30 Minute Meals and thought, "I can do better than that!" And while the nauseating memories of RR come flooding back (to me), so do her self-doubts and a feeling of being overwhelmed. 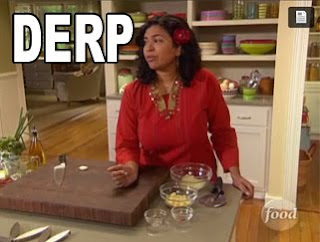 Like Herb, it takes Aarti a few takes to get things down, but she eventually does. 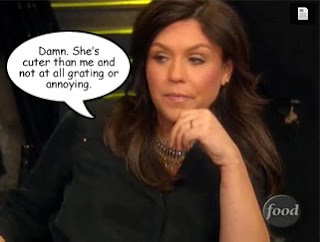 Finally, we have Tom. 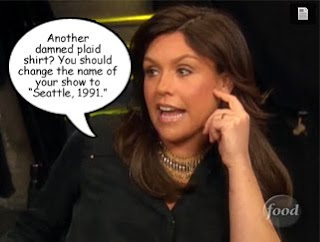 He starts his "Rambling Man" routine and starts saying anything that comes to mind. 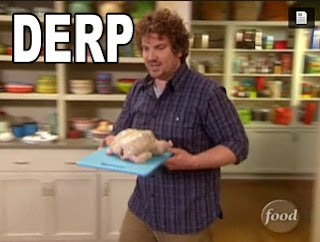 He realizes he's talking too much when he starts to imagine Bride of Fogelstein in his head saying, "Tom, shut up." That horrifying image scares him enough to realize that he needs to relax. Eventually he, too, manages to pull off 3 minutes without flubs. 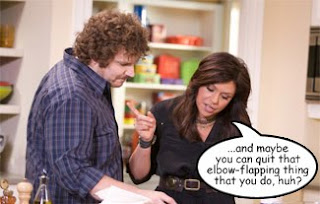 The next day, our Wanna-bes are getting ready for their final judgement. The three pilots will be viewed by the Selection Committee and a focus group consisting mainly of women and a few token gay men. 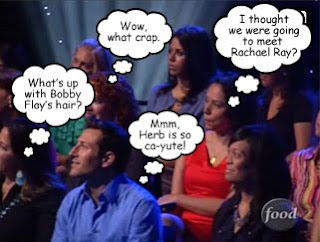 Herb, Aarti, and Tom must sit in the green room and watch the action on a monitor. They view their pilots and the audience reaction to them. Herb's is first, and is pretty good. The focus group seems to like it, but their individual reactions are hidden from the Wanna-bes. 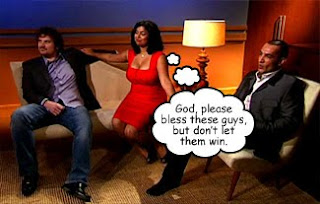 Aarti's pilot is seen next. She's bubbly and funny but she's worried about being judged. The audience likes her and is mostly complimentary. 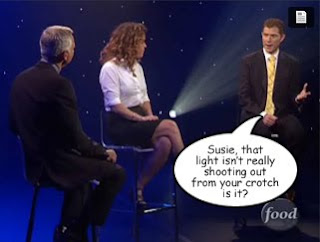 Finally we have Tom, who is on fire. The audience adores him. They say he's different, that he's not a cookie cutter chef. In other words, he looks like a slob.

The focus group leaves the soundstage and the Wanna-bes are allowed to meet with Bob Tushface, Bride of Fogelstein, and Bobby Flay. Behind all of them is the "Food Network Wall of Shame Fame," which bears highly airbrushed portraits of various FN personalities. One portrait is blank 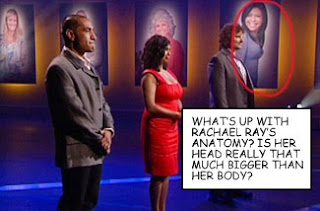 The judges tell Herb that he had a strong presence, and it was gratifying to see that his POV had evolved into something workable. Suzie says he is a star. But not THE star. 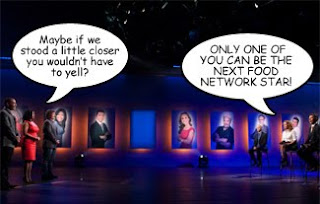 Aarti has natural star power. But they're not saying she's THE star. Suzie loves that her show seemed like a casual chat in the kitchen with girlfriends, and wishes she had girlfriends to chat with.


And Tom makes cooking look fun. Plus, he's a star. But not THE star. 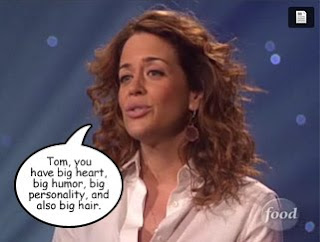 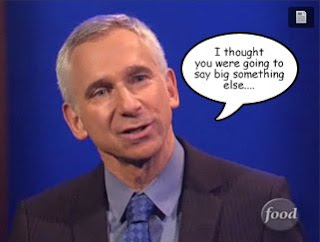 After telling each of them that they are a star, they are sent offstage once again while the Selection Committee  has a staged chat about who is best. And one last time the Wanna-bes are summoned in front of the camera. Brooke Johnson, president of the Food Network is trotted out to tell them that whomever wins will start filming their pilot the next day, and it will air in one week at 3:30AM on Thursday on Food Network Siberia. 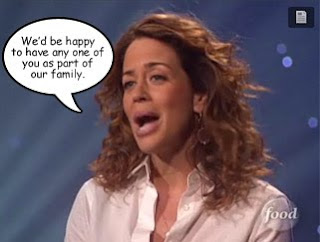 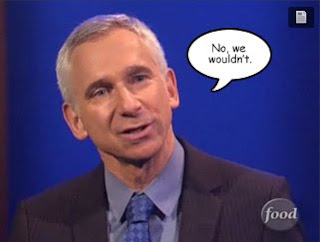 And the moment we've been waiting for.... 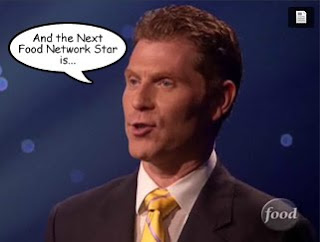 Congrats to Aarti and her demons. We Minxes are actually pretty happy with the verdict because we've been pulling for Aarti all along. Mind you, not that we'll be up early enough to ever watch her show.

THE END.
Posted by theminx

True fact: I met David Krumholz at a college friend's wedding in 2001, and I thanked him for killing Lucy on ER. He looked at me like I was a crazy person, and scootched quickly away down the buffet line.