Allow me to take you on a tour of the way my mind works as I'm planning dinner. You're probably thinking, "the way her mind works is scary!" And you're right. So allow me to post the appropriate warnings before we proceed. 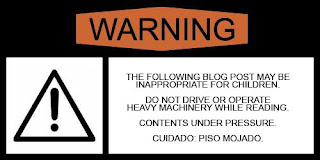 Sometime last week I was opening the fridge for a snack and noticed two slightly-shriveled bell peppers left over from the 4th of July. My brother-in-law had purchased them with no clear idea in mind and I took them off his hands. With no clear idea in mind. Now they were starting to look a little elderly and it was time to do something with them. But what?

Feeling posh, I thought I'd "confit" them. Stew them in olive oil until tender. But then what?

A quick visit to the freezer revealed a package of halibut pieces. Not filets, but oddly-shaped bits and pieces. Hali-butts. That's all Trader Joe's had to offer on our last visit, so that's what we bought. (Who the eff bought all of the salmon?) I thought I could put some pepper confit atop the fish. And that's as far as I got.

Come Sunday, the confit was ready and the fish had been thawed and was awaiting its fate on a paper-towel-covered plate in the fridge. But what to serve with it? We had no potatoes in the house, but we did have rice. I wasn't feeling the white-on-white-on-white plate, even with the nice dash of color from the peppers. Last night's meal was monochromatic enough. How about polenta? That sounded good, but we had about half a cup of cornmeal in the cupboard. :::writing cornmeal on shopping list::: What we did have was a box of Jiffy cornbread mix. I was *not* going to put the oven on in this heat. So I made...corncakes.

Corncakes, halibut, and peppers sounded...dry. I needed a sauce. Another look in the freezer caused an avalanche of ingredients - a package of Reese's-flavored Klondikes fell on my foot, followed by a bag of peas and two char siu bao. And thus was revealed the ingredient I sought: a partial bag of yellow corn kernels. I would make a corn sauce that would rival the one we ate at Babbo. Or not. But I would make a corn sauce. 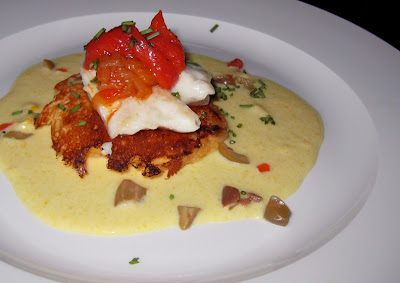 And there you have it. Corn cake, halibut, bell pepper confit, corn purée. Garished with chopped green olives and a snippage of chives from the overgrown jungle that is our herb garden. And lest you think we Minxes are starving ourselves, that's just the "beauty plate." We each had more than one 2.5" diameter corn cake and matching morsel of fish. And we liked it.

I didn't do much more with the fish than heat it through, as it was still too wet to get a good sear. I think scallops, shrimp, or crab would make an excellent version of the dish, so I suggest you use your favorite seafood. As for the other components:

First roast peppers by holding them over an open flame until the skins blacken and char. Place hot peppers in a paper bag to steam for several minutes. While still warm, rub off the blackened skin.

Quarter the peppers, coring and seeing them in the process. Slice into thin strips.

Place onions into a sautée pan with a bit of the oil and cook until softened. Add the peppers and the rest of the oil. Turn the heat down to low and stew the peppers in the oil until they are very soft and all of the moisture let off by the vegetables has evaporated, about 1 1.5 hours. Season to taste with salt and smoked paprika. Remove from heat and set aside until ready to use.

Sauté corn in butter until warmed through. Transfer to the bowl of a food processor. Add about half of the 1/2 and 1/2 and pureé. Strain into a bowl, saving solids for the corn cakes. Add remainder of half and half and salt and put aside until ready to use.

Stir together first four ingredients into a relatively smooth batter. Add remaining ingredients. Drop by heaping tablespoonfuls onto a greased skillet or pancake griddle over medium heat. Cook until bottoms are lightly golden. Flip cakes and cook a few minutes more until brown on both sides. Remove to a plate while cooking the rest of the cakes. When all are done, put aside until ready to use.

Bah. I still haven't tasted a Maryland wine worth drinking.
Posted by theminx

Also - try St. Michael's Winery, my favorite is their Viognier.