Clams Casino Bruschetta, or It Pays to Read Directions

So I'm all excited about entering this Chicken of the Sea recipe contest. I rush to the store and load up on canned shellfish to put a new spin on an old classic - clams casino. For some reason I have a dip in mind but after determining it might be too boring, I decide to convert it into a bruschetta topping. (By the way, that's pronounced "broo-sketta" and don't let me catch you saying otherwise.)

The recipe has to be "healthful" because the contest is in conjunction with some crap show on Lifetime, so I buy turkey bacon and light cream cheese. And I make these gorgeous crostini, top them with clam glop, and take photos.

See, gorgeous. (With the help of Photoshop. The wooden dish was too close in color to the crust of the bread, so I darkened it. And you wouldn't have even suspected if I hadn't opened my big mouth and told you.) 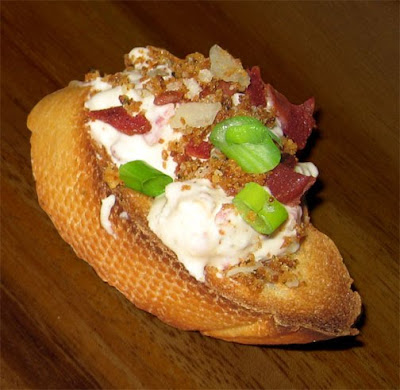 By that time, the dish was long eaten, and I hate do-overs.

But wait, there's more! Not only had I made this delectable bruschetta, I had also made another dish (which will get its own post)! So that's two fuck-ups for me. Go me!

In any case, at least you'll be able to enjoy the fruits of my labor. If you make the recipe, that is.

Directions
Fry turkey bacon until crisp. Remove from pan to a paper-towel lined plate and allow to cool.

Add chopped onion to bacon grease (should be a scant teaspoon or so in there; if there's more, remove it) and sautée until slightly brown but still a bit crisp.

Place softened cream cheese into a medium bowl. Add bacon, clams, onion, bell pepper, and oregano and stir to combine. Dribble in enough clam juice to give the mixture a spreadable but not too runny consistency. (If you plan to use it as dip rather than as a bruschetta topping, then add clam juice until it's of a dippable consistency.) Add salt and pepper to taste. Refrigerate until ready to use.

Prepare crostini by preheating your oven to 350F. Arrange baguette slices on a baking sheet and brush both sides with olive oil. Bake until golden, 15-20 minutes. Remove from oven and allow to cool, about 15 minutes.

In a small sauté pan over medium heat, toast bread crumbs and oregano in a dribble of olive oil. When crumbs are browned and fragrant, remove to a small bowl and stir in the Parmesan.

As there are usually only two of us at Casa Minx, I made only 6 pieces of bruschetta. That left more than half the clam mixture to become something else. With more onions, more turkey bacon, and a bit of milk to thin it out, it made a fantastic pasta sauce. Actually, the pasta sauce worked out better than the bruschetta because warming it brought out the clam and oregano flavors. So if you make the bruschetta, you might want to pop it under the broiler for 5 minutes or so to heat the clam goo.
Posted by theminx

This is why your blog is the first one I read each morning. Sounds like something I would do. But it does look gorgeous.

Aw, that's aggravating! I hate having to do the exact same thing all over. Maybe you could photoshop your head into the photo somewhere? LOL!

Awww...that's so nice to hear, Kristine!

Sue - the thought did come to mind.

Sounds and looks yummy. I have the same pet peeve about the word bruschetta. And I absolutely hate it when people try to correct me.