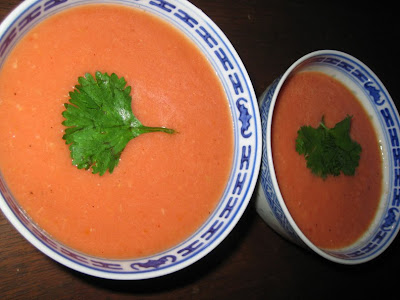 There was a whole lotta cooking going on last weekend, partly to make up for going out to dinner so many times in the previous weeks, and partly to work on recipes for the various contests I plan on entering in the month of September. One of the dishes that were not contest-bound (and therefore not shareable here) is this lovely cold soup.

I found myself with some excess coconut milk in the fridge (along with an excess of a lot of stuff - the norm) and thought I would try the gazpacho Next Food Network Star winner Aarti Sequiera whipped up in that show's penultimate challenge. The recipe lacked seasoning and I realized that she relied on the pickled shrimp part of the dish to provide most of the flavor.

That would not do. I was not making pickled shrimp; I merely wanted a light and refreshing starter to the meaty entrée I was preparing. So I dug around through the other excess stuff in the fridge and added a little bit of this and a little bit of that to come up with...

To wash down dinner, I made some Watermelon Margaritas. 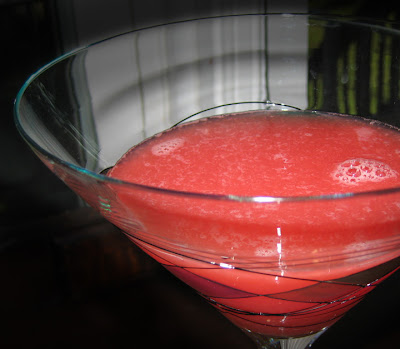 While the appetizer and beverage were big hits right out of the chute, the entrée needed a bit of tweaking. Not quite "back to the drawing board," merely an adjustment to flavors. Wish me luck. :)
Posted by theminx