How would you feel about dining on twenty-one courses of delectable cuisine? Yes, 21 courses all in one meal! We Minxes got to do just that last Saturday as we participated in the dining experience known as Table 21 at Top Chef season 6 finalist Bryan Voltaggio's restaurant, Volt.

Two of our original party of four were suddenly presented with another obligation on the same date, so I almost cancelled the reservation. But I'm glad I didn't - we had booked the table ten months in advance and I have to say it was definitely worth the wait.

Partly because Chef Voltaggio himself was in the kitchen that night.

Not long after being seated at a semi-circular counter that curved around the garde manger station, we were treated to the sight of our first dish, a cocktail, being prepared with a mixer and some liquid nitrogen. The resulting slushie made with Domaine de Canton ginger liqueur, vanilla vodka, and orange topped with a mascarpone mousse was like a grown-up creamsicle. Also like dessert. (Well, life is short!) This was served with "chips and dip" of crisply fried prosciutto with a airy, cheesy sauce. A second "cocktail," a capirinha in a sphere created with the aid of sodium alginate and calcium chloride, topped with salt foam and pop rocks, and served in a Chinese-style soup spoon, followed suit.

And then came the food. Tuna tartare. Chicken Parmesan. Butter-poached lobster. A single perfectly-cooked scallop served with...pea purée (two of Top Chef's famous "gates" in one dish!) Skate. Arctic char. Pork belly. And more. The tuna tartare was sublime - finely diced, gorgeously fresh yellowtail wrapped in a Volt-style rice "paper" wrapper, served with intensely citrus yuzu-flavored and wasabi tobikos, an agar-enriched ribbon of avocado mousse, and a soy air. I could have eaten this and nothing else and been completely satisfied. Ok, so I'd want a bigger portion...or three.

Another favorite dish was the Pineland Farm strip loin, gorgeously seasoned (as was every dish) and practically fork-tender, served with crisp-textured lobster mushrooms. A chilled corn soup with a bit of crab salad had an intriguing bit of frozen coconut milk on top that I will swear had a hint of Kaffir lime.

A sweetbread dish was very similar to the one we had last October, except that instead of being chicken-fried, the sweetbreads were presented as a spring roll (a small slice of a spring roll). Interesting, and very crunchy, but I preferred the original. However, the single Cherry Glen Farm goat cheese-filled ravioli with balsamic brown butter, another dish from the a la carte menu, was one I would be happy to eat again and again.

You're probably noticing by now I didn't take photos of the meal. I wanted to be respectful to the chef, plus taking 21 photos is both time-consuming and distracting to other diners. I did snap one shot of a dessert, the Meyer lemon tart, although it was not the prettiest dish we ate that evening. 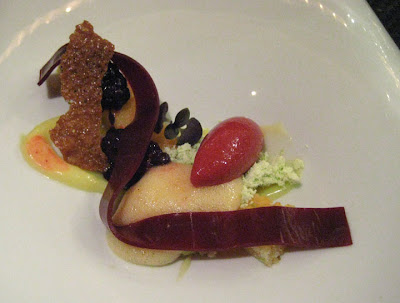 The food was delicious, but one of the real highlights of the evening was being able to see exactly what goes on in a busy restaurant kitchen. I was impressed at how smoothly everything ran, and the calm demeanor shown not just by Chef Voltaggio but by everyone in the place. If anyone was in the weeds, it was not obvious; there was no shouting, no raised voices. The only time Bryan seemed perturbed was when his pastry chef tried to get his attention with, "Chef! Chef!" He held a hand up and gently shushed her before checking out the issue.

Gordon Ramsay probably would have thrown her up against the wall, called her a few choice names, and fired her on the spot.

The only complaint I have about the meal is that the service is possibly too attentive. Every dish required a change of silverware - the old setting would be removed in its entirety, even if a spoon or fork was not used, and then replaced for the next course. I don't see the point of taking my clean spoon only to replace it with another clean spoon. Having a server reach around to place and remove plates was annoying enough (except the one time Chef Volt removed my plate) and I had to control the urge to slap one of the hands that seemed always to be coming into my line of vision.

Other than that - perfection. I'd do it again in a heartbeat, although I know that will probably never be a possiblity. Table 21 is currently booked through the end of 2011, and who knows if they'll continue with this particular meal beyond that. So if you are lucky enough to have a reservation, by all means do keep it!
Posted by theminx

i got invited to go in october!
yay... glad to hear you enjoyed it..was a bit leary bout the drive etc..
xoxo

My, oh, my, what an experience you had! The meal sounds fabulous and your always astute comments give me a strong sense of what it was like even if you elected not to photograph every course. (I'm with you on that, btw. Some experiences are best experienced. Without being altered by photographing, in a Heisenberg Uncertainty Principle intrusion kind of way.) Thanks for sharing!

Glad to hear you had such a great time. And I second you about taking pictures in the kitchen. I took pictures of my 24 course meal at Alinea, but that was without flash, with a teeny camera and the waiters stayed away from us alot! If I was sitting 10 feet away from the chef, I probably would have just enjoyed it! I can't believe Kit couldn't join you guys, who were your companions in the end??