Most weekends, when I do the cooking Chez Minx, my menu has been planned and ingredients purchased in advance. Except last weekend. The week before I had worked on recipes for three separate recipe contests, and that didn't leave me with much mental energy to put toward the next batch of cookery. So I went to the grocery store on Friday afternoon and nosed around the meat cases.

Oh how I miss Siemek's, purveyor of fresh meats and sundry groceries to the greater Fells Point area! It was practically across the street from our house, and my mother shopped there at least twice a week to pick up plump pork chops or freshly ground meat, chicken for frying, or fresh sausages.

Instead, I have the Giant. Their meat selection is pathetic. After a lot of hemming and hawing, I selected a package of country-style ribs with which to experiment for the cookbook I've finally started writing and wandered over to the hopefully-better seafood department. The extra large shrimp looked good, so I invested in a pound, with no real plan in mind.

Once home, I decided to make shrimp and grits. A look in the pantry revealed no grits, but once I get an idea in my head it's hard to shake. Why not make a similar dish with what was on hand? I had a can of golden hominy, bought because I had never seen anything other than white hominy, and a box of Cope's Dried Sweet Corn, bought because it was a novelty. There was also corn in the freezer. I had corn meal too, but figured a dish with three kinds of corn would be corny enough. 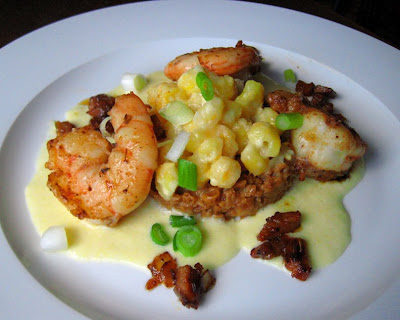 I've eaten several variations of shrimp and grits; one of my favorites is served at Louisiana, in Fells Point. There, the shrimp comes blackened and accompanied by a puddle of corn-flavored cream. I borrowed those two elements and replaced the pile of grits with a bed of reconstituted sweet corn topped with hominy cooked with onions. I also added a sauté of andouille, to add a contrasting flavor.

The sweet corn is interesting. It's indeed sweet, almost dessert-like, with molasses-y undertones. Like Indian pudding (which is where the rest of it might end up). The hominy tasted, well, like hominy - a dry, earthy, corn flavor, like that of tamales and tortillas. The shrimp were fantastic, full of that iodine quality we Minxes love, with a decent amount of spice.

Mr Minx thought that this dish would cost quite a pretty penny in a restaurant. I concur.

Peel and devein shrimp. Toss with blackening spice and set aside.

Melt 1 tablespoon butter in a saute pan over medium heat. Add onion and sausage and cook, stirring occasionally, until onion has wilted and browned and the sausage has darkened and started to crisp up. Add minced garlic, stir to mix well, and remove from heat.

Remove sausage mix from pan, wipe clean, and place over medium-high heat. Add remaining tablespoon of butter. When butter melts, add shrimp in one layer. Cook for a minute or two until bottoms start to turn opaque. Turn shrimp and add sausage mixture back to pan. Cook an additional 2 minutes.

Arrange cooked shrimp around edge of hominy stack. Sprinkle on some of the sausage and onion mixture. Garnish generously with chopped scallion.

in a 2 quart saucepan, saute onion in vegetable oil over medium heat until it starts to soften and sweat. Add hominy and chicken stock; bring to a boil. Turn heat down and simmer on medium-low heat, 45-60 minutes, until much of the broth has evaporated and hominy is tender.

Sauté corn in butter until warmed through. Transfer to the bowl of a food processor. Add about half of the 1/2 and 1/2 and pulse into a pureé. Strain into a bowl, discarding solids. Add remainder of half and half and salt and put aside until ready to use.

Place dried corn in a 2 quart microwave safe bowl. Stir in water, milk, and sugar. Cover with waxed paper and place in microwave. Cook for 10 minutes at high power. Stir and allow to rest for 15 minutes. Cook an additional 10-15 minutes on high power, until the water is absorbed and the corn has plumped up somewhat. Set aside until ready to use. 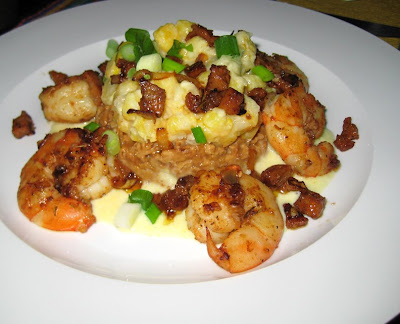 This looks delicious! I love corn and I'm curious as to the addition of sugar to the dried corn. My mom's family is from Lancaster, PA and so dried corn was a common side on our table and I always found it to be relatively sweet on its own, without any addition of sugar. Did you include the sugar to differentiate it more from the other corn preparations here? Regardless, I thoroughly enjoy your blog so thanks so much for sharing all of this!!

I added the sugar because the directions on the box called for it. :)