While it seems that the Minxes mainly dine at either high-end restaurants serving "modern American cuisine" or a hole-in-the wall Chinese or Thai joint, the place that has probably gotten most of our dining-out business is the Nautilus Diner, on York Road below Timonium Road. Where else can we have a good bargain meal and have leftovers to boot?

On occasion we'll order their serviceable cheeseburgers (we usually get them "deluxe" with slaw, pickle, fries AND onion rings), but more often than not we'll get a whole dinner. In most cases, these come with soup or a (fairly substantially-proportioned) garden salad, plus choice of potato and veg. Regularly, I eat the salad, the potato, and the veg, and take the protein home for another day. That was the case on a recent visit to the Nautilus, when Mr Minx and I were accompanied by his brother, Craig. 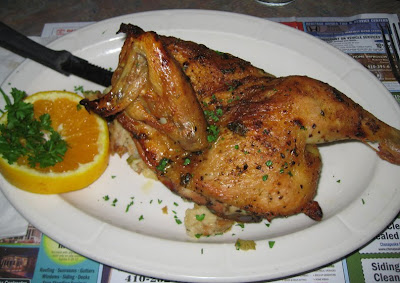 I had the half baked chicken with stuffing, a baked potato, and stewed eggplant. I ate the wing, a slice of thigh, the stuffing, eggplant, and about half the potato. Our dog Milo was the happy recipient of some of the breast meat, and the remainder made a nice chicken salad for my lunch later in the week. While the chicken was slightly dry, the skin was nice and crisp, and the eggplant had a nice punch of red pepper. Oh, and it was $12.99 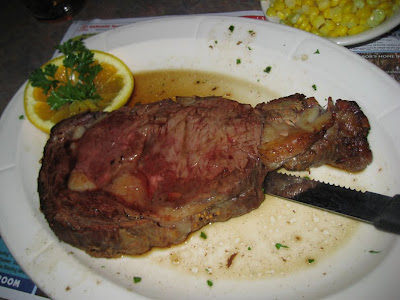 Mr Minx had the prime rib, a $17.99 special that day. His brother had the whole rockfish for the same price. The steak was tender and juicy. I didn't try the fish but Craig seemed to enjoy it quite a bit, saying it was perfectly cooked. 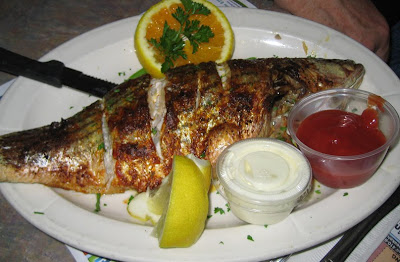 In the past, we've enjoyed the restaurant's huge servings of lasagna, moussaka, meatloaf, and fried chicken. Their crab cakes are a little bready, but otherwise tasty. Less successful are dry souvlaki and dull grilled chicken sandwiches.

The Nautilus recently introduced a new menu with trendy additions to the roster of classic fare. Now one can get a pastrami and swiss burger, a chicken cordon bleu panini, or a spinach quesadilla, as well as breakfast all day (and night) long.