With five cheftestants left, the realization that there is only one more set of DC-based challenges has set in. Everyone is nervous. Kelly misses her husband. Inigo misses any number of people, including possibly his ex-wife and mother of his son, his Russian mail order bride, Fezzik, and the dead possum that lives on John Somerville's head.

Kevin of course is still pining to snuggle with the beige velour bathrobe.

At the Top Chef Kitchen, the cheftestants meet with Padma and Food & Wine magazine editor-in-chief, Dana Cowin. Ed remarks that he is friends with Dana on Facebook, but that she doesn't know him. And I'm friends with both of them on Facebook, in addition to most of the cheftestants from the past several seasons. Except Sam Talbot, with whom I have had a "friend request pending" for over a year. It annoys me to see "Sam Talbot is now friends with blah, blah, and blah" come up in my feed. What about me, Sam? What about ME?

I promise I won't stalk you. That possibility ended when Bryan Voltaggio came on the scene. 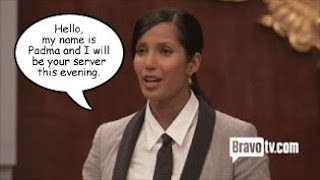 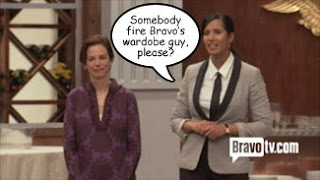 The Quickfire Challenge this week is to create a fabulous dish to pair with one of several available wines. This is the final High Stakes Quickfire, the prize being a trip to London courtesy of Hilton Hotels.

After drawing knives, the cheftestants scurry to cook. With only 60 minutes, Kevin decides to attempt pork belly in a pressure cooker. We also learn that Inigo loves wines and visiting vineyards, but wine pairing isn't Tiffany's strength. 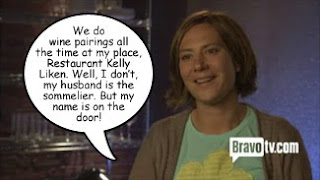 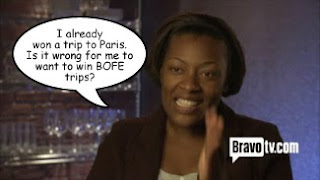 With few minutes left to cook, Kevin checks his pork belly and determines that it will never be done in time. He chooses to change course with quail, which he knows won't match with his wine. 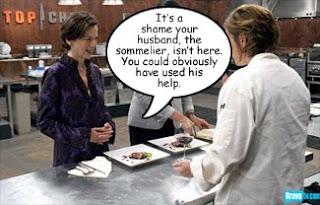 We find this to be true when Dana Cowin names his dish as one of the two least-successful, along with smug Kelly's. On top are Inigo's and Tiffany's. And the winner of the trip to London is....

...is Inigo! His first win in three challenges. The Tony Robbins books must be helping.

Padma then announces to the cheftestants that only four of them will be going on to the finale location, which for the first time in Top Chef history will be out of the country - Singapore! Oh my - an Asian country. They might even cook Chinese food there. Kevin will not be pleased.

But first...the Elimination Challenge. Padma tells them nothing more than that they will be heading to Goddard Space Flight Center where Tom will give them details.

Kelly is all geeked out about Goddard. Apparently she had gone to space camp as a kid and considers herself a "space nerd." 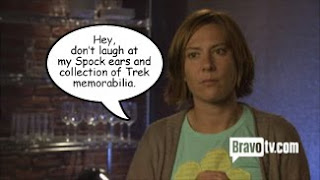 At Goddard, they indeed meet with Tom and NASA scientist Vickie Kloeris who manages food for the space station. She's working some scary Bond villain-like braces. 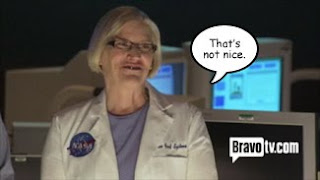 They are gathered in an operations room that makes Tiffany feel like she's in the movies. 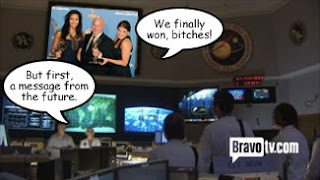 And then, on one of the big overhead monitors, they see a battalion of Klingon battlecruisers approaching get a Skype call from two of the astronauts who are currently floating around on the space station. 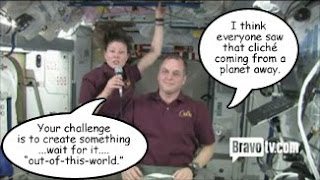 These astronauts talk about the food they eat on the space station, showing off their shiny foil packets of yum, and introduce the Elimination Challenge: the cheftestants must create a dish that follows guidelines for zero gravity dining. But tastes good. 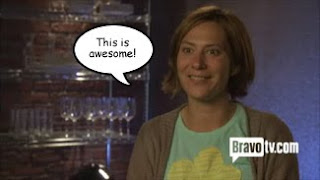 Someone buy the woman an adjective.

They will be cooking their meals for eight diners including scientists, astronauts, the Judges, and aging famewhore Buzz Aldrin.

In addition to meeting zero gravity restrictions, the chefs are advised to create meals that are low in sugar, have small pieces, and are somewhat spicy.

After 30 minutes and $200 of shopping, the cheftestants head back to the Hilton kitchen and get to prepping. Ed is going full-Moroccan with a lamb dish, to please the spaced-out spice-lovers. Tiffany and Kelly are both doing halibut dishes. Angelo is doing short ribs, and Kevin, who thinks he's better than the rest of them and their high-falutin' ethnic flavors, is doing steak. Zzzzzzzz. 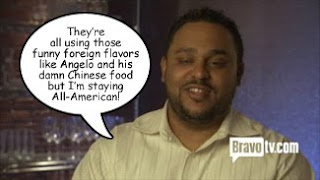 What? Nobody thinks a pork dish is a good idea? They could call it..."Pigs in Space."

The next morning, back at Casa Cheftestant, the chefs discover that someone has broken in and left a note. It reveals that their ride to the challenge venue is outside, and that the winner of the challenge will get to take it home. They all ooh and ahh over the black, fully-equipped, Toyota Sponsormobile and pile inside for their journey to the Ronald Reagan Building at the International Trade Center where they will have one hour to complete their dishes.

The kitchen there is small, which creates space (ha!) issues. But the cheftestants get things done. Soon Kelly is serving her dish to astronauts Sandra Magnus and Leland Melvin, Jaws Vickie Kloeris, Buzz "Will Do Anything to Be on TV" Aldrin, and judges Tom, Padma, Eric Ripert, and Anthony Bourdain. 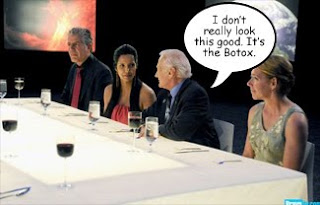 Wait? They have allowed Bourdain to participate again? After the not-so-nice things he's said about Padma? If they're letting him judge, can I judge next season? I'm even meaner than he is. And can think of worse things to say.

After Kelly's halibut comes Ed's Moroccan fantasy, which Ripert finds to contain too many elements, even though everyone else basically loves the dish. Bourdain disagrees with his friend, saying that Ed really "nailed Morocco." 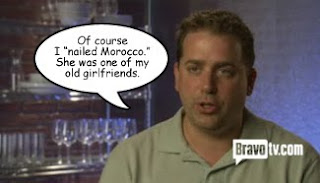 We then hear that Kevin's steak was well-seasoned, Tiffany's halibut in curry didn't excite Ripert, and Inigo's glazed short ribs with candied ginger may have been too sweet. (Also, he made pea purée, which should be a 20-point deduction.)

Ripert and Bourdain, seated at opposite sides of the table, bicker with each other like an old married couple during the judging. Ripert seems bitter but Bourdain is being unusually nice, almost as if he's trying to spite his old friend. 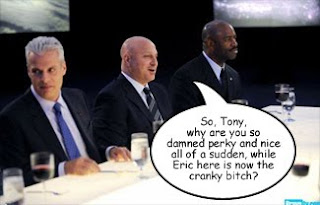 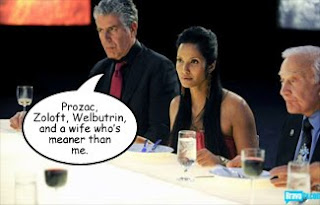 fakeout scene
The chefs are in the RR Building kitchen, tasting each other's dishes and making comments about how much they may or may not have fucked up, before heading off to Judges' Table. And then they leave...without cleaning up the colossal mess they've made! Is this standard operating procedure? Haven't we seen them clean up after themselves in the past?
/fakeout
I'm kinda shocked at myself for being so disgusted at the fakeout. But then I always clean up after myself. Or Mr Minx does. :::embarrassed:::
On to Judges' Table.
We are given a pass on seeing Padma morosely call the chefs to the table and find all five of them there already. They all did an amazing job, even though Kevin's was safe, Inigo's was sweet, and Tiffany's had a bit too much fish sauce.
Despite the sweetness, Inigo's short ribs - which he claims to have made love to - are given the win. 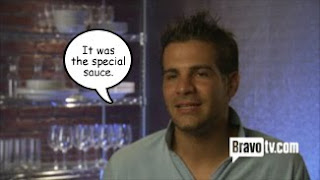 And he gets the Toyota Avalon, plus a copy of Bourdain's latest book, Medium Raw. Inigo goes to the stew room to stroke and fondle his car key - to make love to it - while the other chefs face their fate.

This kind of judging seems really difficult because while the dishes may not have been perfect, they were pretty darn close. After nitpicking a bit more, they decided that Tiffany's dish with its preponderance of fish sauce and tough peppers did her in. 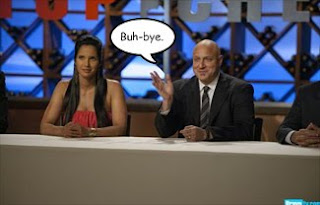 Tiffany seemed to be an emotional favorite to win this competition - I would have liked to have seen that, too - but it was not to be. We can only hope one of the less-obnoxious final four emerges victorious. Wait - who would even fit that description?

Next week - Singapore!
Posted by theminx

Great recap as always, but where were Tiffany's frozen mussels?

Feel free to mention them as often as you wish in your own recap!

Kevin SOOOOOo should have gone home! I liked Tiff: BOFE her personality and her cooking! Poor Vicki! Has she never heard of "Invisalign?" Or shit, cosmetic dentistry- If I, a lowly drag queen, can afford it, so can a rocket scientist!

I, too, loved the Pigs in Space reference. My brother used to fly my niece through the air saying that. Not that she was porky or anything. They just loved the show. I wished Kevin had gone home. Tired of his whining, and wanted Tiffany in the finals.

I found it ironic that days after winning the Emmy, they aired the most boring episode ever. Everyone cooks good food. No drama. No snark. They didn't get to sample the freeze dried food? They couldn't get Buzz Aldren to do anything crazy or even slightly uncomfortable? Anthony fucking Bourdain couldn't even come up with something fun to say? And then Tiffany goes home. Boring, boring, boring. Sad.

(Then she can use that long tie to restrain Inigo from making love to any more entrees!)

And I agree that Kevin should have gone home. Maybe Tiff was given the boot b/c she'd won $20,000+ already, anyway?

Someone buy the woman an adjective.

Someone buy all of these folks one. PLEASE!

And what's this about you saying not nice things about Padma. You LOVE Padma! ... Wait. That was Padma, not you. Never mind.

Cliff, by the time you comment, there are no "follow ups." There are few comments to begin with.