I have a confession to make: I don't like s'mores. Go ahead, blink in disbelief. I can wait until you're done.

Have you recovered yet? Then I shall proceed.

When I was a kid, I loved eating toasted marshmallows. At least once a summer we'd pack the family into the car and make a trip to my uncle's house in Pasadena. Only a county away and probably an hour or so drive, it always felt like a real journey to me. In addition to the proximity to the dead-fish-and-broken-bottle-covered "beach," Uncle Charlie had something we didn't have - a grill. After the family feasted on burgers and hot dogs, he'd let the kids roast marshmallows over the dying coals.

It wasn't until years later when I realized I could toast a marshmallow just fine with a fork held over a gas burner on the kitchen stove.

But never did I contemplate putting the gooey, melty, caramelized-and-slightly-burnt wonder that is a toasted marshmallow on a dry, scratchy graham cracker with a piece of horrible Hershey's milk chocolate. Why would anyone do that?

I'd make a lousy Girl Scout.

I tried my first s'more when I was in my early 30s, when Mr Minx and I shared one at a friend's block party. It was one of those special moments of adulthood when I realized that I had not been missing anything.

Everyone else in the country seems to adore s'mores and s'more-flavored things. Restaurants even offer them - or a variation on the theme - as a dessert option (Vina Rosina and Jack's Bistro locally, to name two). I still don't get it. Marshmallows and graham crackers are perfectly fine by themselves. Hershey's chocolate, not so much. So I thought, what if I changed things up? Would better chocolate and different cookies make a difference?

Welcome to the Great S'more Experiment, in which the Minxes pair different cookies and different varieties of milk chocolate with regular old squishy grocery store marshmallows.

While the Leibniz biscuits had a less-scratchy texture than graham crackers, they were still too dry. The Lindt chocolate, however, was a huge improvement over Hershey's. The experiment concluded with my eating the rest of the chocolate bar and calling it a night.

I love Lorna Doones! Why don't I eat these more often? They're a pretty decent shortbread cookie, far better than the rancid-butter-smelling and much more-spendy Walker's brand. And they made a pretty decent s'more. And once again, the non-Hershey's chocolate proves to be better than the original. Yes, thank you, I'll have another. Or should that read, "I'll have s'more?"

The chewy texture of these cookies was just about perfect, however they had a few too many things going on and were perhaps too sweet. Still, better 'n grahams.

No additional chocolate required here, just two marshmallows sandwiched between two cookies. Perfection. I'm starting to think that milk chocolate has been the wrong idea all along.

That was easily remedied by a trip to the store to buy more cookies and some dark chocolate! 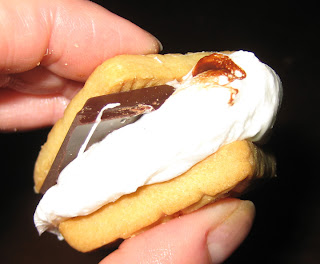 Ok - this is more like it! The dark chocolate is definitely better than the milk. But it's still not perfect. Oh, and did I mention that I love Lorna Doones? 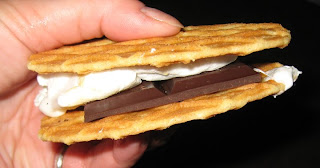 The chocolate is right, but the cookie is too sweet. Of course this makes me want to experiment with real waffles....

While the cookies had a slightly artificial flavor on their own, teamed with chocolate and marshmallow they shone. The chewy texture was a plus, as was the hit of cinnamon. Guest taster Kate, who had never eaten a s'more of any type, gave it a big thumb's up.

Ok, so this was overkill. Still, better than the traditional by a mile.

After seven different combinations, we were getting a little sick of s'mores, so that's where we stopped. So what was learned through this experiment? That just about anything other than the original combination of graham crackers, third-rate chocolate, and marshmallow is pretty damn tasty. In all versions, there was some intense sweetness, so a little went a long way. And that marshmallow stickiness pops up in the oddest places, even when you're absolutely sure you licked it all off....

My favorite combo? #4. To my tastebuds, it had the proper ratio of chocolate to marshmallow to cookie, and good texture.

What's your favorite s'more, or have you never ventured away from the original?
Posted by theminx