Or maybe it was a Japanese-style Southern dinner? In either case, it was delicious. 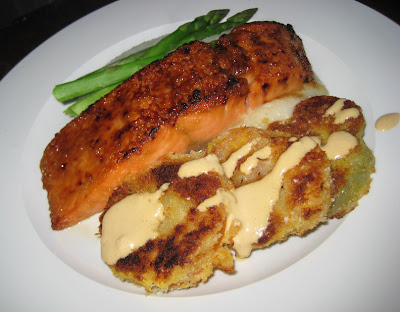 Most weeks, I plan at least one weekend dinner in advance and have had an opportunity to hit the grocery store at some point to pick up ingredients. This particular week, however, it was too hot to even think about cooking, and by the time Sunday came around, I had nuttin'. So I pulled some salmon out of the freezer and contemplated doing a miso glaze, which would take the menu into the direction of Japan. I also wanted to do something with green tomatoes, but that was more of an American South thing. But if I used panko and made a sauce with sesame, ginger, and soy...why couldn't those two disparate food cultures meet successfully?

Very successfully, at that. The salmon was sweet, the tomatoes and their topping were both tangy and spicy, and the grits added a more mellow, creamy accent. My favorite part was the coating on the tomatoes, which stayed crunchy even after they had cooled to room temperature.

Mix first three ingredients together in a small bowl and set aside.

Dip tomato slices into flour, then egg, then panko. Fry in a bit of vegetable oil until crisp and browned on both sides. Remove to a paper-towel-lined plate and sprinkle with salt and pepper. Serve with sesame mayo.

In a small bowl, mix mayonnaise, ginger, sesame oil, and garlic powder. Refrigerate until ready to use.

Place grits and water in a large microwave-safe bowl. Cover with plastic wrap and nuke on high for 8-10 minutes, removing to stir halfway through, until the grits have reached the desired consistency. Stir in wasabi powder and butter and season to taste. 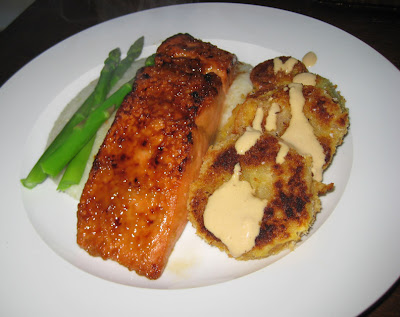