There's yet another new food truck in the area, and this one is peddling grilled cheese sandwiches both ordinary and exotic, from the classic American cheese on white to a somewhat heretical brie- and cheddar-laden version of a lobster roll. I'm a big fan of grilled cheese sandwiches, especially when accompanied by a bowl of homemade tomato soup on a chilly Fall evening, so I was curious to sample Grrche's wares even if it was the height of Summer.

My first lunch from the truck wasn't particularly successful. I had ordered one of the fancier sandwiches on the menu, the Dominique, which featured Gorgonzola and Parmesan cheeses, grilled chicken breast, arugula, and a walnut pesto on my choice of white or wheat. (Every sandwich comes with a pickle spear and the choice of an apple or a bag of chips on the side, which is a nice touch.)

I've probably mentioned this in past food truck reviews, but the entrance to my building is literally across the street from the officially City-sanctioned truck stop, so I don't have far to go to get my lunch fix. Yet my sandwich was unpleasantly soggy by the time I jogged it to my office. It was also a bit greasy, which can be expected of grilled cheese sandwiches, but coupled with extreme sog, there was just a bit too much moisture. Not only that, the bonus pickle spear, which had been pre-wrapped in waxed paper that had been taped shut, immediately soaked a wet hole in the bottom of the bag, and was rather difficult to unwrap without getting both hands covered in pickle juice. 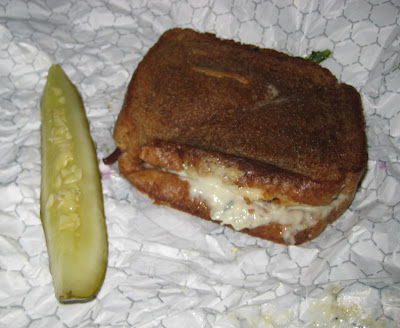 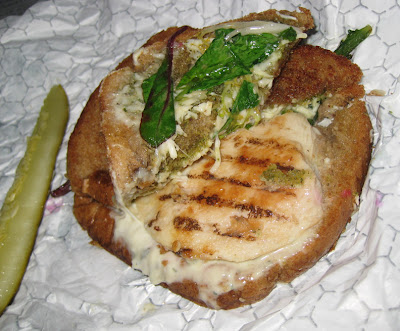 On to the sandwich itself. I was pleasantly surprised to find that the boneless skinless chicken breast was actually moist and juicy, and I liked the Gorgonzola cheese. Good thing, because that was the sandwich's predominant flavor. I couldn't taste the pesto at all, and the arugula had become a sodden blob of green. So basically the flavors were salty and bitter (I find bleu cheeses to have a pleasant bitter element) and could have used some oomph. Since Gorgonzola pairs very well with fruit, I would substitute a chunky pear or apple chutney in place of the pesto, adding a welcome sweet aspect that would round out the sandwich quite nicely. I would also add a good melting cheese as a buffer between the bread and the moist fillings, to act as glue. The chicken breast itself I would cut into slices and shingle over the bread so that if the bread does get soggy, the whole chunk of meat doesn't just plop out onto the plate, as mine did. Finally, I'd be using much thicker/sturdier bread to support the rather heavy and wet cast of characters within. 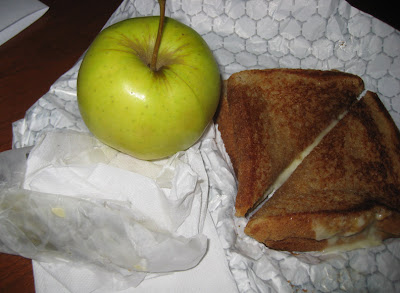 The second time I tried GrrChe, I went for a more-simple brie-on-wheat sandwich. Without the extra filling, this sandwich didn't have sogginess issues. I also think the truck wranglers might have gotten the hang of griddling, because it was far less-greasy than the one I had eaten two weeks prior. This week's pickle spear was not taped into its wrapper, so I didn't have to splatter my clothes with pickle juice in order to free it from its bondage; however, it did render my pile of napkins rather vinegary and unusable. While I appreciate the thought, I think it might be best to leave out the pickle altogether. The sandwich itself was tasty enough, but really called out for something in which to dip it.

Grilled cheese sandwiches still seem like a really great idea for a food truck, and with a little more fine-tuning, I think GrrChe has promise. Especially on chilly Fall afternoons, when a nice grilled cheddar on wheat would be great lunch alongside a cup of hot tomato basil (or even broccoli cheese) soup.