A restaurant named "Alchemy" conjures up, at least in this diner's mind, images of a near-magical dining experience, one in which ordinary ingredients are transformed into something special, something found nowhere else. A glimpse at the pretty Hampden restaurant anointed with that name, with its exposed brick, tin ceiling, and high-backed booths in a pale and sophisticated palette, might also give the impression that something special happens inside.

Sometimes it's hard to live up to a name.

After perusing the Restaurant Week menus online, Mr Minx declared that he found Alchemy's menu to be the most appealing, so we made a reservation to eat there fairly early last Thursday night. When we arrived at 6pm, we were the only customers in the downstairs area. After placing our order with our waiter, who promised to "take care of us," we were brought some warm rolls and butter to nibble as we waited. After a longer wait than anticipated, our appetizers arrived. 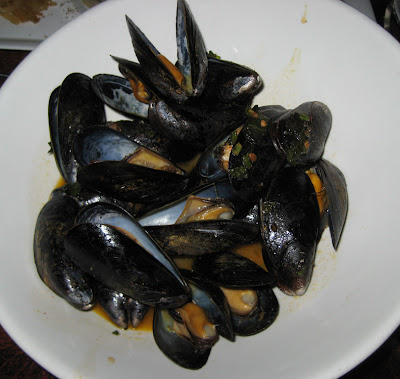 In addition to our Restaurant Week choices, I wanted to try the Mojito Mussels from the regular appetizer menu. The menu description was alluring: "Kaffir lime, blood orange, cilantro, seafood broth, roasted garlic chipotle butter, dark rum, basil chiffonade, fresh mint." Considering that the mint was the only ingredient this dish had in common with the popular cocktail known as a Mojito, I shouldn't have been surprised that the mussels tasted nothing like their namesake. The heap of tender shellfish was served in a near-opaque pale orange broth that had both tart and savory accents, with a predominate sweet spice note that we felt was possibly nutmeg. I felt the dish was the essence of...Autumn.

While not in the least what we expected, we loved it and found ourselves wishing that the restaurant had provided a spoon, or more bread with which to mop up the juices.

While eating the mussels, we also worked on our other appetizers. I am an eggplant fiend, whereas Mr Minx basically abhors it, so I was eager to taste the flatbreads with "roasted baby eggplant, butterscotch hummus, Manchego cheese." In most cases, I find that "flatbreads" are just fancy restaurant-speak for pizza. The most successful tend to have a tender crust - like a Greek pita or an Indian naan - but those at Alchemy were more crisp and dry, one step away from cracker-dom. Served in three perfect squares, my flatbreads bore a schmear of hummus made with butterscotch beans, two thin slices of Asian eggplant, and a veil of melted Manchego cheese. I was disappointed. While the melted cheese was tasty and ever-so-slightly stinky, and the hummus made for an interesting texture, the eggplant had no presence at all. I was hoping for a pile of smoky-flavored eggplant goo, something babaganoush-ish, or at the very least, something even remotely roasted.

About halfway through our appetizers, our entrées made an unwelcome appearance that required the table to be rearranged to accommodate the three additional dishes. The server volunteered to take our obviously unfinished apps away, and I almost slapped her hand. At that point in the evening, while several more parties had arrived since we sat down, most were still perusing the menu. So WHY, pray tell, did they rush our entrées? Correct me if I'm wrong, but isn't it our waiter's responsibility to check on our progress and request that our entrées be fired so that they arrive AFTER our apps have been eaten (and hopefully, their plates cleared)? How was our waiter "taking care of us" if he let this happen? I think that I wouldn't have been as mad as I was (am) had he come to our table and apologized for the error. Not only did he not say a word (he didn't even pay the traditional visit to the table to ask how things were while our mouths were full), but even after we had finished our apps and there were obviously empty dishes on the table, he did not remove them. Because he did not see them. I watched him every time he passed us and he didn't so much as cast an eye in our direction. And it's not because he was busy.

Notice I am not mentioning his name, although I remember it (rare - I'm terrible with names).

Eventually, a busboy took pity on us and removed the empty appetizer plates so we could eat our entrées unencumbered. 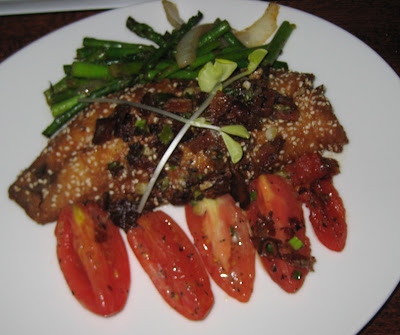 One very positive comment about the entrées is that they both still were somehow piping hot by the time we got around to eating them. Of the two, Mr Minx's soy-marinated roasted red snapper with "sesame crust, roma tomato, pancetta, basil, scallions" was the most successful. The fish was plump and downright juicy, with a smoky bacon flavor from the plethora of pancetta. My big criticism was that the tomatoes had been blanched (in order to remove the skins) perhaps a bit too long, because they had gone from tasting fresh to tasting cooked. The other accompaniment - pencil thin asparagus and onions - was unnecessary and uninteresting. 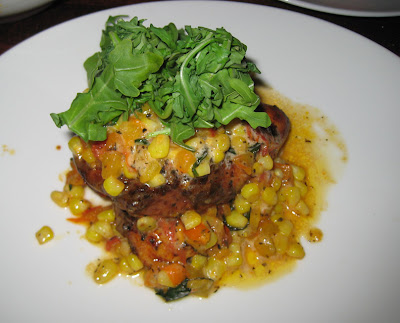 I also received the completely unnecessary and uninteresting asparagus with my dinner, served on a separate plate which took up precious space on the already chaotic table. I wish the menu had mentioned that the "Angel Fire Chicken" was boneless, skinless, chicken breasts, because I would have made a different choice. However, the breasts, which had been coated in Ancho chili powder, were nicely cooked and still quite moist. Overall, however, the dish was a disappointment. The "sweet toasted corn, vine ripe tomatoes, roasted garlic butter, basil chiffonade" was a jumble of indistinct flavors, the corn was very wet and overcooked and certainly not "toasted," the tomatoes merely red blobs. Even the topping of baby arugula had little flavor.

Our waiter finally made an appearance in time to doggy-bag the rest of my entrée. 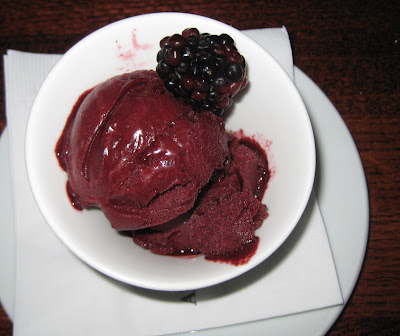 The highest point of the meal was my dessert - the blackberry Cabernet sorbetto. It had a creamy texture, almost like a sherbet, and sang with pure, rich, blackberry flavor. Outstanding. 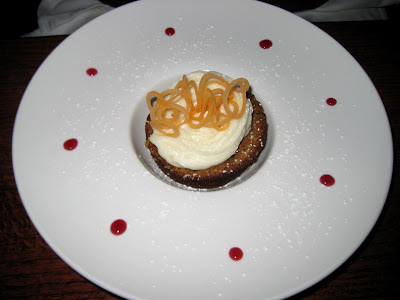 Mr Minx's carrot cake was topped with a Limoncello cream cheese frosting that bore the grainy texture of too much powdered sugar. The cake itself was dense, like a muffin, and probably wouldn't have worked in the usual double-layer form, but otherwise bore traditional carrot cake flavors.

So...a very uneven meal. I have read accounts of similar experiences, so I can't say I was surprised. And while I can forgive food issues if the quality is good overall, I think the service issues are quite a problem. I expect poor timing in a diner or a hole-in-the-wall Asian restaurant, but not in a fine-dining establishment. Part of me thinks that the kitchen forgot about our appetizers and went straight to cooking the entrées, which is why there was a delay in getting the first course out earlier. That indicates an issue with the kitchen, but still does not excuse the indifference of our waiter. Some people might point to the fact that this was Restaurant Week and that many kitchens are not fond of the event because it's too busy, profits aren't what they might be otherwise, etc. etc. yadda yadda. But one of the functions of RW is to introduce diners, by means of an attractive price point, to restaurants they may not ordinarily have visited. If restaurants want these newbies to return with open wallets, they have to make sure the customers leave happy. Or at least not pissed-off.