Another recap short on images, I'm afraid, because the Bravo Internmonkeys have not yet put up any show shots for the episode. I can't even find them in the supersecret place they're usually hidden. [3:37PM 8/11/11 ETA: the photos are up, but none of them inspired me to be funny.] 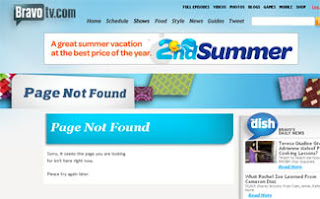 I'll just do the best I can, under the circumstances, because I care so very much about the three of you who are reading this!

This week's chefpetitors are Caterer Vicki Ferentinos, food truck chef Chris Thompson, and home cook Yuki Tsutsui who has a day job in finance. Right off the bat I have an intense dislike for the balding, bearded, blowhard Chris as he follows his belly into the kitchen. He reminds me - as most balding, bearded men with big bellies do - of the hopefully-soon-to-be-ex-husband of a dear friend of mine. Thank jebus he wasn't also peppered with moles, too, because I would have turned off the television right then and there and scrubbed out my eyes with Clorox.

Anyhoo, Blowhard is a bit full of himelf because he has formal culinary training, while the other two do not. He's pretty sure that they will be washing his dishes at the end of the day. Personally, I want to see his doppelganger scrubbing toilets with his tongue....

For the Signature Dish Challenge, the Blowhard is making a very ambitious and schmancy dish of pancakes, foie gras, quail eggs, serrano ham, and a blueberry gastrique. Rocco comes in and inspects all of the various elements, smells the foie gras and makes the comment, "this has some age on it." 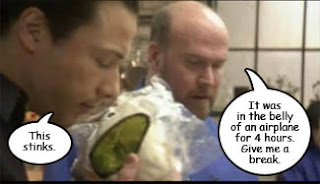 Blowhard had to bring foie to New York City from Minneapolis? Certainly the stuff started out somewhere just north of NY, in the Hudson Valley? Couldn't he have picked some up at Dean & Deluca or Citarella? Fouchon?

Rocco then goes on to plague Vicki - who is making a buttermilk-fried chicken salad with corn and peppers - and makes yucky faces at the idea of maple mayonnaise. Last but not least,  he visits with the Venezuelan-raised but otherwise Japanese Yuki, who is whipping up a "Japazuelan" fish taco by sandwiching cod in a freshly-made arepa. And theminx is drooling at the thought of both of the ladies' dishes.

At the Altar of Judgement, Rocco seems much more playful than douchey this week. As he critiques the dishes, he has a smile on his face and an almost benevolent twinkle in his eye. He's probably practicing for his next big career-breaking gig - Santa Claus at Short Hills Mall. 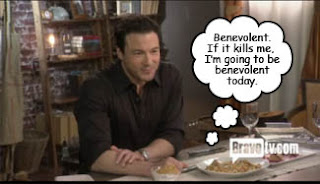 That doesn't, however, explain what, to me, seems to be an astonishing amount of oddly-colored pancake make-up on his face. Not quite Michael Kors territory, but almost. The Bravo Internmonkeys must have been in charge of make-up that day.

Rocco first tastes Vicki's salad and tells her that it's too sweet...but also extremely delicious. Blowhard's plate, which looks like a crime scene to me, contains a well-balanced combination of ingredients, except for the blueberry gastrique, which is extremely sour. So sour, Rocco makes a face like the ones babies make when eating citrus for the first time. Only not cute.

And finally Yuki, who has presented her taco in a glass, is told that while it has great flavor, she could have arranged the elements of the dish better within the arepa, so that the diner could get a bite of both the fish and the tomatillo salsa at the same time. For this amateur mistake, Yuki gets to sit out the rest of this episode.

A shame the rest of us can't.

Vicki is declared the winner. Rocco then tells Blowhard and Vicki that the theme this week is "perfect pairings." The guests will be three couples, one of which is celebrating a 10th anniversary. The chefpetitors are expected to create dishes that include perfect pairings - elements that are wonderful on their own, but even better when eaten with an accompaniment. He then calls out Jes Forehead to help the chefs with decor. After they air-kiss, Jes makes some sort of awkward joke about her and Rocco being a "perfect pair," which makes him cringe. He always seems to cringe a bit when she comes out, so I'm guessing she's a flirt, and he's not interested.

Sometimes I have to wonder if he's a "confirmed bachelor." (wink, wink, nudge, nudge)

Vicki goes off with Jes first to talk about how she wants to redecorate the Formal Dining Room. Basically she wants it to look like a giant unmade bed. Blowhard, who takes the Terrace Dining Room, wants a country wedding/Nantucket picnic-y kind of vibe.

Shopping comes next, and while at the store, we learn that Vicki is making a carrot ginger soup with coconut shrimp, lamb chops and vegetable risotto, and pumpkin donuts with a warm vanilla custard. Blowhard is biting off more than he can chew by making a super-schmancy tuna poké with mango purée paired with poached lobster and celery root purée, followed by beef short ribs with soupe à l'oignon, and a dessert duo of crème brulée and pot de crème. (I don't think I've ever before typed a sentence in English that contained so many accents.)

The guests arrive and they are: Barney's Creative Ambassador Simon Doonan and his partner of 16 years, designer Jonathan Adler; cheese expert Tia Keenan and her fiancé, wine expert, Hristo Zisovski; and the Daily Show's Samantha Bee and Jason Jones, who are celebrating their 10th wedding anniversary.

Vicki serves first. She's been paying attention and presents a mini grilled cheese sandwich for the shellfish-allergic Tia, but everyone else gets coconut shrimp along with their carrot ginger soup. After that well-received dish, Vicki serves a deconstructed Cubano sandwich that's so delicious, even Rocco swoons. Then comes unfortunately overcooked lamb with risotto, and specially-prepared shrimp for non-red-meat eater Simon. Then the guests get pumpkin donuts and vanilla custard. The guests debate such important world-changing questions as: Is it a donut or a beignet? And is the sauce actually a custard? (because Vicki couldn't find cornstarch and used Wondra instead) The general consensus seemed to be: It tastes great so who cares? Finally, as a special touch, Vicki presents the guests with freshly baked lemon scones and jars of "orgasmic" home-made berry jam for the next morning, although several of them dig in right then and there.

Over to the Blowhard's party, where, delightfully, we see him struggling to get his first course out to the diners. He had not taken into account that his dish of accented és has far too many steps for an hour-long party. At the half hour mark, Rocco has to stomp into the kitchen to attempt intimidation. Eventually, the dish comes out, but without a lobster substitution for Tia. While the dish is mostly good, Jason remarks that it seems like a dish from a great restaurant but made by the lunch chef. Oooooohh! Next come the short ribs, which are so delicious that even Simon Doonan ate his portion. He kinda had to, otherwise he'd be sitting there twiddling his thumbs since Blowhard forgot about his dietary restriction. Then came the Cuban-inspired dish of chicken with a green sauce, which everyone adored, followed by the delicious duo of desserts.

Rocco excuses himself to pick a winner. And then he goes to the kitchen. 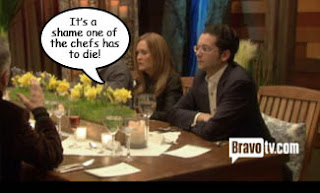 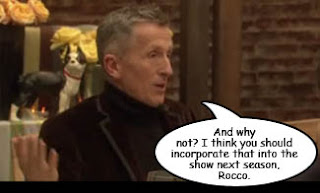 ...and comes back with a bottle of champagne and...Vicki! While Blowhard's food was obviously very tasty, it must have been Vicki's conscientiousness about dietary restrictions that earned her the win. And after Mr Obnoxious won last week, I was certainly glad to see this week's finale take a different turn.

Next week - a 90 minute finale celebrating the 65th birthday of Liza Minnelli. You might only get 2/3 of a recap, because I doubt I can keep from falling asleep after the first 60 minutes.