It's finale time - can I get a big cheer? Ok, if you won't, I will: YAAAAAAYYYY!!!! While this season was better than most, recapping two shows at a time is a bitch, and I'll be glad for some time off.

This week the three remaining Wanna-bes - Jeff, Vic, and Susie - head to the Food Network Studios to meet up with Giada for one last Camera Challenge. And this one will end in a painful elimination. That's right - we'll only be forced to watch two "pilots" rather than the usual three! 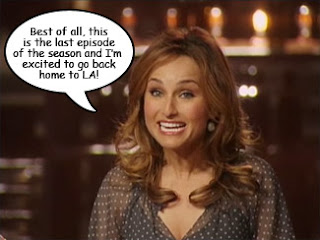 Giada bares her teeth and tells the three that for this final challenge, they will need to cook and present the best dish of their life. As the three of them scurry around the kitchen, Jeff tells us he's making his Dad's deconstructed eggplant Parmesan as a sandwich. Vic is taking the traditional Christmas Eve feast of the seven fishes and presenting it as zuppa di pesce. And Susie is making her dead father's pork cooked in lard - carnitas - with a big ol' pitcher of margaritas on the side. Just in case the judges need a little nudging.

Jeff is the first to face the Selection Committee and does a pretty good job of both describing his sandwich and telling a story to evoke his father, Big Gus. Giada says that his eggplant Parm is one of her all-time favorite of his sandwiches, but Bride of Fogelstein thinks that maybe he could have had a bit more energy. 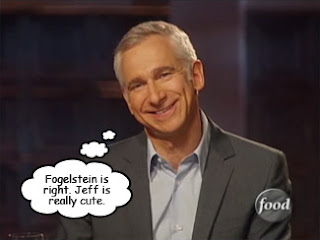 On to Susie, who talks about...any guesses? Ten points to the gal who said, "her dead father, in a sombrero, heating lard in a copper pot!" (Sounds like the Mexican version of Clue.) Bob Tushface was impressed with her story and said he wanted to be in her backyard wearing that sombrero, perhaps lounging around with some papi chulos.... 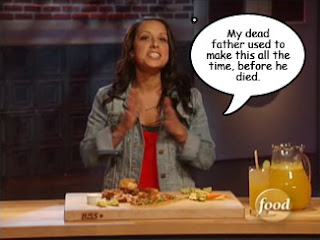 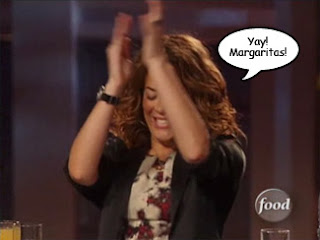 Finally, Vic talks on and on about the feast of the 7 fishes but barely touches on the zuppa di pesce itself. Fogelstein says that he presented "full-on Mama's Boy," which just seemed like something to say for the sake of having something to say. Tushface said he loved the heart and soul that Vic put into the presentation, but Bobby, ever the spoilsport, says he wanted to hear more about the actual dish. Sheesh. He must think Vic's auditioning for a cooking show or something.

And then it's time for the Gayest Commercial Break Ever (this week): designer/stylist/man about town Robert Verdi matches the three Wanna-bes to Valspar paint chips. Vic gets a purple, Susie is an orange, and Jeff is a rather shocking lime green. WTF does it mean? And doesn't "Valspar" sound like a medicine for herpes or something?

Back to the show. We see the three finalists head to the green room to stress out while the Selection Committee discusses their performances: predictably, they love Jeff; they think Vic is rough around the edges, but unique; and Susie has everything they want to see. They've been showing the Susie love since way back in the beginning, so I'm thinking she's going to win this thing. 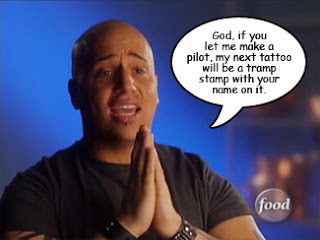 Indeed, when called out from the green room, the Selection Committee tells Susie she's safe and then they send her backstage so she doesn't have to see the boys cry. Vic is the one who ends up going home pilot-less, but he claims to be happy for getting as far as he did, and receiving the education he'd never received. Let this be a cautionary tale for you folks: If you drop out of school in the 9th grade, you may well end up covered in tattoos, with bulging arms that don't fit comfortably by your sides, attempting and failing to get a job on the Food Network. Or, you can drop out, go to culinary school, and become a rousing success after many years and many shows on the Food Network, like Bobby Flay.

Either way, it's a lose-lose scenario. 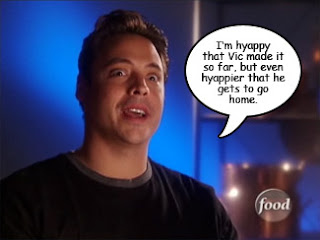 Jeff and Susie then spend some more quality time with Giada who tells them to report to Studio A in the morning. They'll be filming their "pilots" with a special guest director - none other than SuperDouche, Guy Fieri. 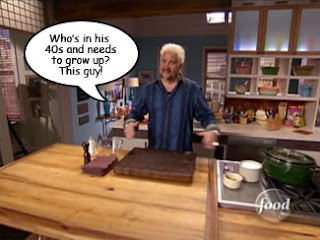 So the next day, the two dutifully show up and get sent to hair and makeup. I notice that Jeff's got really great skin, and I'm finding myself a bit jealous.

Back in the studio, Guy Fieri gives them more bad news - not only will he be directing them, but also a focus group of "select Food Network viewers" will be watching the finished pilots, in addition to the Selection Committee. 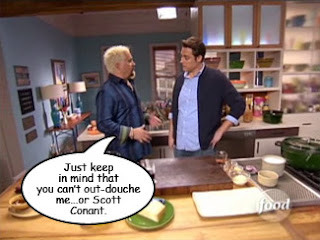 Jeff shoots first. Guy gives him a pep talk and Jeff tells us he's sick to his stomach. He probably realized that the amount of grease in Fieri's hair could power a Fry-o-later for a month. We see bits and pieces of three different takes, which, predictably, look better as time goes on. 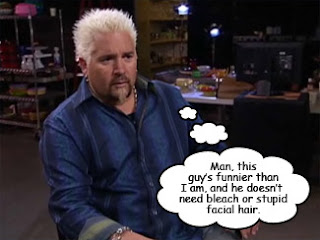 Susie then takes the stage, full of adrenaline and a bit scattered because the kitchen is unfamiliar. And again, three takes and she gets the hang of things.

The next morning, Jeff and Susie enter the Hall of Douches, where giant bizarrely-posed portraits of Food Network Stars adorn the walls. The worst one is of Rachael Ray, whose head and torso are facing completely different directions. Then the "focus group" comes out, and of course it's comprised of the eliminated Wanna-bes who have been sequestered for the past several weeks, hating each other and every minute of it. You know they want blood. 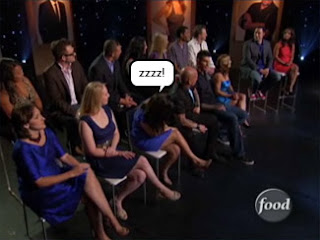 Susie's pilot is shown first. It's good, which makes Jeff more nervous than he already is. The focus group has mixed emotions about it. Of course Penny hates it, but Jyll insists Susie was fabulous. Jeff admits she was great and he didn't want her to be great. Then his pilot airs, which is just as good, if not better. Time for Susie to be nervous. 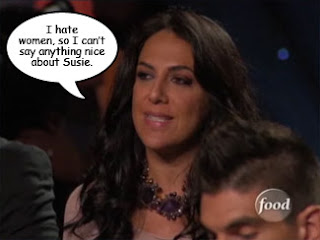 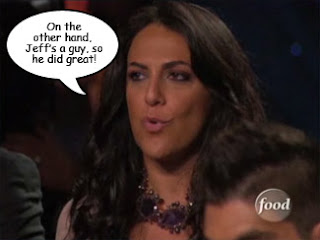 The focus group gets shooed offstage, and Susie and Jeff are sent to Studio B to stew while the Selection Committee deliberates "for a few minutes." Meanwhile, on Top Chef, it takes 4-5 hours to decide who's leaving each week. It only takes a few minutes to give someone a TV show? 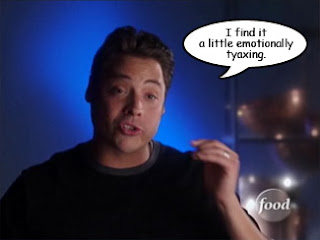 The judges chatter. They think that Susie is infectious, enthusiastic, and cooks from her soul. Jeff is appealing to both men and women. Just ask Tushface. Giada is impressed with the fact that he's not changed his POV through the entire run, and it still works for him.

Finally, after 4 minutes and 38 seconds, the Selection Committee comes to a decision. And the winner is...

...but first, let's bring out Brooke Johnson, president of the Food Network, who Bobby Flay calls "the best boss ever." Ass-kisser. That Ms Johnson...she has a real face for radio.

...the winner is Jeff, the Sandwich King! And while I was wrong with 2/3 of my predictions for finalists (Whitney and Orchid), I did get Jeff correct. Maybe I should work for the Food Network? 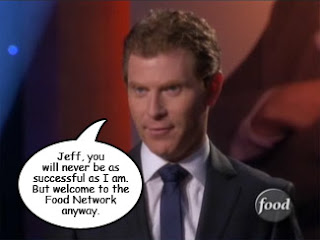