First off, I want to say that I got a kick out of the gazillion hits the Episode 6 recap received in about a five minute period last night. Apparently a bunch of haters lovely folks from the Philadelphia/South Jersey area found my link on Facebook and came here to leave hate mail love letters in the comments. The more hits on the blog, the more $$$ I make from my ad provider, so keep 'em coming!

This week, our three competitors are Kevin Gaudreau, a corporate chef for The Pier Restaurant in Rhode Island and a former Marine, Janet Kim, a chef at Gordon Ramsay at the London, and Chris Colcagno, the executive chef at Cafe Amici somewhere in New Jersey. All three are self-taught, with no formal culinary education. That said, they all seem extremely competent, which makes the show a bit harder to recap in a humorous manner.

For their Signature Dishes, Kevin - who tells us that the restaurants under his purview have been run like machines - is making a version of shrimp and grits with leeks. Chris, who is cocky as all get out, is doing a blackened mahi-mahi with a sweet corn mash and spinach. And Janet, who is Korean, is doing a fancy deconstructed dish of spicy Korean pork belly in a crepe served with three kinds of kimchi.

While Rocco noses around the kitchen, he notes that Chris is making a beurre blanc and obnoxiously starts to quiz him on technique. Cocky Chris is sure his dish will be perfect, that is, until he ladles the sauce onto his plate and finds that it has broken. 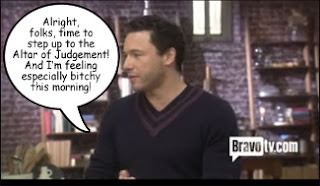 At the Altar of Judgement, Rocco gives him the old "I told you so" face and tells him that while his sauce is a complete and utter fail, his fish was almost perfectly cooked and his corn was tasty. On to Janet, whose twee tweezer-applied bits and pieces of kimchi cause Rocco to cry out in pain over the loss of texture that a good kimchi would otherwise provide. Lucky for her, her pork belly was exquisite. Finally, Rocco tells Kevin that his dish looks mass-produced but tastes great. 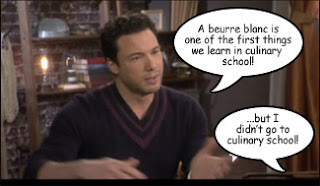 Because a broken beurre blanc is such a rookie mistake, Chris is out and Janet and Kevin get to go on to the dinner party. This week's theme is "Gastropub," which sounds like it could be a lot of fun.

Jes Forehead comes out and she and Rocco do the pretend kiss thing they do every week. This time, it looks like Jes lands on on his cheek, and he, though contorting his mouth into fish lips, seems more like he's trying to avoid touching her with them. He's clearly afraid of The Forehead.

Kevin is the ultimate winner of the challenge and therefore he gets to choose his room first. He goes for the formal dining room, which he wants to make somewhat rustic. Janet wants her room to be a real explosion of Anglophilia, something she describes as a "cross between Sid Vicious and Vivienne Westwood." As an Anglophile, Janet should have known that Sid Vicious and the rest of the Sex Pistols - and indeed every "punk" who came afterwards - owes their entire look to Westwood. She is literally the Grandmother of Punk.

Next comes shopping. While at Garden of Eden, Kevin tells us he's making a pea soup, fish and chips, lobster pot pie, lamb tenderloin, liver and onions, and a chocolate banana bread pudding. Janet is making an equally ambitious menu of bacon chili crisps, Pimm's and lemonade beet salad, bone marrow with Stilton, beer brisket with Yorkshire pudding, and finishing up with a rose mascarpone "cloud." 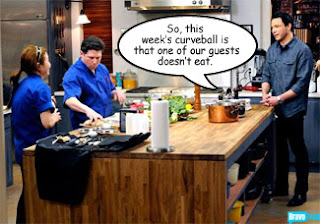 Rocco stops into the kitchen to tell the chefs that there is one annoying diner who has dietary restrictions and will eat no beef, pork, or organ meats. The chefs immediately scurry to make substitutions.

The guests for this week's dinner are food writer Amanda Hesser, actor Christopher McDonald (who's wearing an astonishing amount of pancake makeup), chef Ken Oringer, So You Think You Can Dance presenter Cat Deeley, Frank Carfaro of home furnishings company DESIRON, and actress Raven Symoné. Funny, I never noticed the "é" at the end of her name before. I gotta wonder why some folks use accents (or in the case of the stupid - apostrophes) and yet mispronounce them. Her name should be pronounced "sy-mo-NAY" not "sy-MOAN." 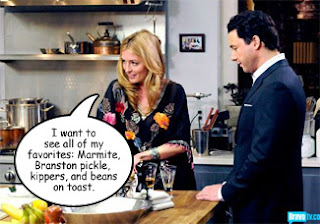 Janet serves first. For the non-pork eater, she makes malt vinegar-flavored crisps (potato chips) while the rest of the group gets a batch flavored with bacon powder (made with tapioca maltodextrin, a parlor trick I've tried in the past). Turns out that Raven SymoNAY is the culprit, but she exclaims "I taste bacon and I taste chili but those smell like old feet!" pointing to the vinegar chips that Cat Deeley seems to have in front of her. Or maybe the editing was just bad. In any case, for Raven's second course, she gets a Stilton fondue to eat while the rest of the table rhapsodizes over bone marrow with Stilton. The next course is beef cooked in Guinness, with a welcome dish of gnocchi for Raven. And finally, the dessert gets mixed reactions. Cat Deeley claims not to know what an "English milky tea broth" is even though she is British. Um...looked like tea with milk in it to me.

My biggest objection about Janet's dinner party is that Rocco pronounced mascarpone incorrectly by putting an extra "r" in the first syllable. You're Italian, Rocco. For shame! Heaven forbid Giada De Laurentiis ever get a hold of you, she'd be all, "mas car POWN ay" in your face. 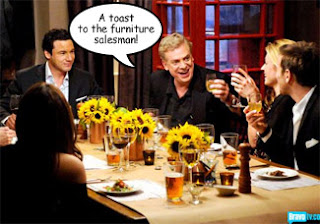 Kevin is up, and he can only allow the diners a generous 8 minutes per course if he wants to finish serving in the hour time frame. He rushes out some pea soup with prosciutto (tomato for Raven), fish and truffled chips, a lobster pot pie with far too much saffron (that someone remarks is like licking bathroom tile - WHO licks bathroom tile, aside from my retarded special old cat?), a lamb course with beans that also gets served to Raven because she didn't clarify that she didn't eat red meat, only pork and beef. 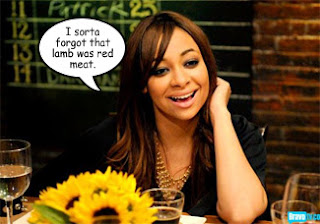 Liver and onions came next, with an edamame salad substitution for Raven, and then finally, a deconstructed banana bread pudding which was the least favorite dish of the six.

While both parties seemed fun and most of the food seemed appreciated - there were so many courses served, however, we didn't get to hear all that much praise or disdain for any of them - Rocco had to pick one winner. It might have come down to decor. Janet had great ideas, but I think Jes Forehead let her down. The colors were too bright and poppy, like a fluorescent-lit 2011-version of punk rather than the filthy, heroin-addled, safety-pin-and-unemployment-riddled dark time that it was. Kevin's vision was much cozier, more pub-like and welcoming. And maybe his food was better, because he got the win.

I seem to be the only one who thought this was really bogus.

They didn't like the deconstruction of Janet's salad, but hey were crazy about the bone marrow and the dessert and didn't have major criticisms of any dish. The guy's dinner, the saffron tasted like licking bathroom tile (and damn, I've been tempted to figure out just how she knew that, like Nigella knowing how the inner thigh of an 18th century courtesan quivers) and they didn't like his dessert. I thought she had it wrapped up.

But beyond that, this is just more of the whole "technically perfect but soulless Asian" that reality competitions tend to trot out. Hung on TC. Even whats-her-name on ANTM. Whitney's getting it now on TNFNS. It's offensive to me, and I don't buy it at all. I think it's just a way to strike back at someone who's done a damn fine job of learning a craft. If you can't beat 'em, call technical perfection a flaw.