Sorry I didn't do a recap last week. Actually, no, I'm not sorry. I went to New York on Thursday and had a damn fabulous time. Friday and Saturday I was super busy, and by the time I had a spare moment to look at my notes on Sunday, I really didn't feel like dealing with it. Honestly, if I don't do it right away, I don't want to do it at all.

But before I start this week's recap, let me tell you about a dream I had last night because it's vaguely related. What I can remember is that I was suddenly thrust into cooking for a dinner party, and no, Rocco wasn't anywhere to be seen (although I do remember wishing at one point he was around to help me in the kitchen). Instead, the party host was Caroline Manzo, one of the Real Housewhores of New Jersey and a recent guest on Rocco's Dinner Party. The kitchen was chaotic, with dinner guests already seated, a giant pot of beans on the stove badly needing to be drained (and I'm not able to lift it), no planned meat courses that I was aware of, and my having to cook brown carnaroli risotto with: 1) no idea how long it needs to cook; 2) no stock. Meanwhile, Caroline was in a panic arranging antipasti, and at the same time chattering on about me marrying an Italian boyfriend, who, now that I reflect on it, appeared in an Inception-style flashback-within-a-dream cameo as Andrew Garfield. That scrawny guy in the new Spiderman movie. And yes, I did watch the trailer yesterday afternoon. My mind is so freaking susceptible to suggestion, it's scary. Obviously I was much younger in my dream, because Garfield was born the year I graduated high school. ....

In any case, my dream was far more interesting than last night's episode of Rocco's Dinner Party, which was more annoying than anything. And sorry for the lack of pictures - Bravo only has images from the Signature Dish challenge and none of the rest of the show, and two of three videos are mostly useless.

Anyhoo...the three chefs this week were caterers Daniel "Darth" Vater and Vanessa Cantave, and biscotti baker and royal pain-in-the-ass Natalie Stone. That Natalie bitch talked non-stop, whether anyone was listening to her or not. I was kinda hoping that Rocco would be extra-super-douchy to her because I woulda been.

Her "signature dish" was - no, not biscotti - a pan-seared cod over white sweet potato and turnip puree and a corn relish. As she finishes plating her dish she yells, "I hate it I hate it I hate it!" which causes all and sundry to step away from her, wondering if she weren't perhaps a victim of head trauma at some point in her life. She does have five kids, so that might be part of the madness.

Daniel was almost equally annoying. He claimed that his stuffed chicken breast dish, which he called "chicken ballotine" to fancy it up, wowed celebrity diners from here clear to New Jersey. 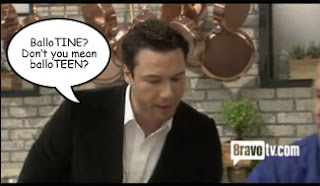 Hey, man, don't bother Daniel with things like fancy French pronunciation. Do you think he's gay or something?

Meanwhile, third chef Vanessa is much more modestly confident and definitely more quiet as she works on her seared scallops dusted in porcini powder and served over creamed leeks. 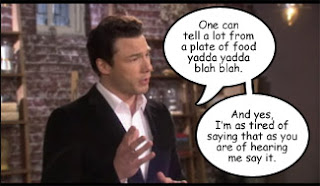 When it's time to present the dishes on the Altar of Judgement, Rocco tells them he's going to first taste the one that he finds most appealing, which is Lord Vater's. While it looks good, it's a bit overwrought for what is essentially a stuffed chicken breast. Vanessa's dish is technically proficient, and the worst Rocco can muster is to make fun of her quail egg topping. And finally, Natalie's dish, which looks like shit, surprises Rocco with its deliciousness. Looks like she's going to be staying. But can wee bird eggs beat out fussy chicken? I'm not sure I can deal with both Darth Feyter and Nutjob.

And I don't have to. Vanessa is proclaimed the winner of the challenge and Daniel is sent off to grumble about how great he is while he packs his knives and goes.

Rocco then tells the girls that this week's theme is French cuisine. They'll need to plan their menus using Julia Child's Mastering the Art of French Cooking as their bible. Jes Forehead is then trotted out to help them with party planning.

Vanessa's parents are from Haiti, so she decides to inject some Island soul into her decor, with soothing blues and greens and a blue toile tablecloth. Natalie, who is clearly insane, tells Jes Forehead that she wants her room to be romantic, intimate, like a woman's bedroom, but also decadent like Paris in the 20s, gluttonous, with nude fat people, and lots of fruit on the table.

While the chefs shop, we learn that Nutjob wants to make gorgonzola-stuffed dates wrapped in bizute (prosciutto - she's Sicilian), bacon and onion gnocchi, filet of sole stuffed with duxelles, and a gateau a l'orange. Vanessa is making a red snapper crudo, an onion and plantain soup, braised short ribs, and a banana tart. The only French I'm seeing in these menus are the words "duxelles" and "gateau."

Back in the kitchen, Nutjob hasn't stopped talking for a minute. 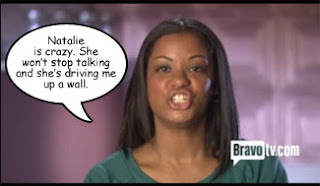 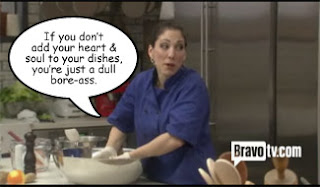 Meanwhile, the guests arrive: Julie & Julia author Julie Powell, actor Michael Ian Black and actress S. Epatha Merkeson, event planner Marcy Blum, French model Leah de Wavrin, and French chef Alain Salhiac. Rocco brings Powell into the kitchen to meet the chefs, as if they're supposed to be excited to meet a blogger who turned out a book so uninteresting, they had to add a whole other book AND Meryl Streep to turn it into a halfway watchable movie.

And still they failed. 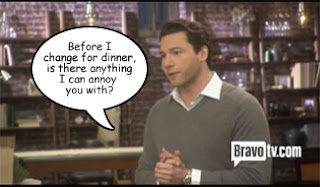 Nutjob serves her food first. Her dining room looks like a Russian whorehouse - a ton of fruit on the table, purple tinted drawings of nudes on the walls - it's just hideous. This week's annoying vegetarian is Marcy Blum (who eats fish, which means she's NOT a vegetarian) whose dietary pecadillos must be accommodated. I'd be like, "Sorry bitch, you should have told me well in advance. You're going to have to be satisfied with eating the parsley garnish." But Natalie complies by omitting the "bizute" from her dates and makes plain pasta for her first course. Not that it's served mind you - a waiter gives Marcy a plate of bacon gnocchi, which sends Rocco into the kitchen to whine about it for her.

While Nutjob's decor is a mess, it seems that the guests enjoy her food, particularly the cake. Model Leah - who is a skeleton even with the supposed 10 pounds the camera puts on - tells Rocco that she is "pigging herself" on it. 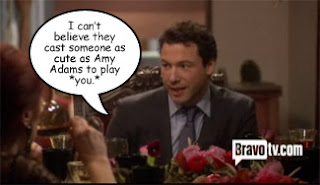 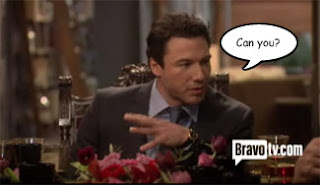 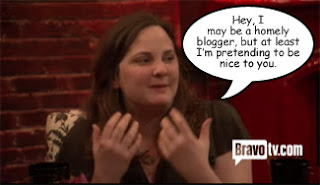 Back in the kitchen, Nutjob tries to foist her food on Vanessa, who is nervous and can't eat. Nutjob says turning down food offered by a Sicilian mother is like spitting in her eye. Me, I would spit in her eye. Maybe it would shut her up for 10 seconds.

It's Vanessa's turn to serve and she sends out her raw snapper amuse. At this point, it's Epatha's turn to be a dick and say she doesn't eat raw fish. It's an amuse. One bite. Just don't fucking eat it. But Vanessa's a better woman than I and cooks a bit of snapper for her. She then sends out her soup course covered in sliced black truffles. Julie Powell is all over the truffles, saying they are like sex. If sex smelt like cheese, garlic, and old socks. To Michael Ian Black however, it smells like a "bladder infection." Nice.

Truffles make another appearance on the short rib dish (more snapper for Marcy), which is so adored by Salhaic that he declares it the best short ribs he has eaten in hees life. Dessert is also a big hit.

Time for the verdict. Rocco meets with the chefs at the Altar of Judgement and tells them they both did a remarkable job but only one can win. Thankfully that's Vanessa and not Nutjob, who keeps chattering all the way out the door.

Next week: She's So Raven! And a competitor who may be even more douchey than Rocco!