This week, the Wanna-bes head to New York to finish up this grueling (for the viewer) competition. After dumping their bags at the Flatotel, they head to Chelsea Market and the Food Network kitchens where they meet up with Bobby Flay. He looks a little jet-lagged but doesn't his coloring work nicely with the kitchen's decor? 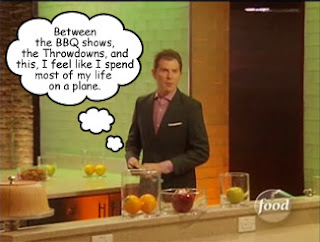 And look at the local luminary we have to judge the Camera Challenge this week - all the way from the Hamptons, Ina Garten! 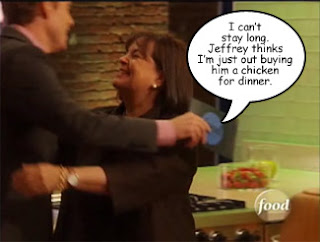 The Wanna-bes' challenge this week is to bake cupcakes that show their personalities, and give a one-minute on-camera presentation. Funny that everyone seems really excited and nobody is bitching and moaning about the fact that this is a dessert challenge. And that they have to bake cupcakes. 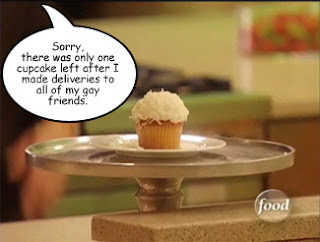 Some of the Wanna-bes' cupcakes sound good, others, not so much. While I like the sound of Vic's tartufo-inspired cupcake, covered in chocolate, and was drooling over Mary Beth's roasted strawberry with strawberry balsamic frosting, I'm gagging at the idea of Jeff's cupcake stuffed with five different Italian meats and Susie's corn cupcake topped with a duck confit slaw. In-between are Whitney's completely unimaginative coconut almond cupcake, an knock-off homage to the one Ina brought, and boring plain yawn-inducing Jyll's rather boring plain yawn-inducing staid orange and chocolate cupcake.

This far along in the competition, it seems that most of the Wanna-bes have their all-important POV firmly in mind during their presentation. Susie's working "Spice it Up" and gets raves. Mary Beth tells a story about strawberry picking with her son. Bobby says her cupcake is the best thing she's made, and Ina insists she'd download the recipe. (But, I'm sure, not pay for it.) 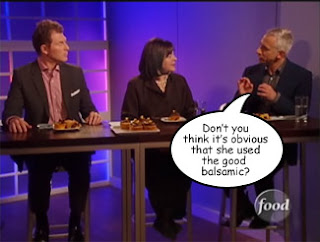 While Whitney's presentation was lovely and her cakes moist, Tushface still worries about her star power. Hell, I'd watch her, mostly because she doesn't have that obnoxious in-your-face Food Network energy. Vic's cupcake is too chocolate-y - as if there is even such a thing. Jyll's cupcake was balanced in flavor and had "lots of impact" (impact? it's a freaking cupcake), but even Ina thinks she's a phoney. And finally Jeff's cupcake is so bad, Bobby says he's going on a diet. 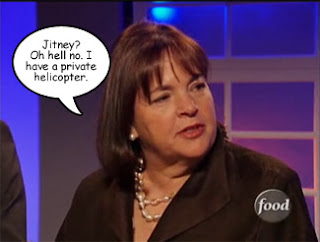 Ina has to dash back off to the Hamptons so another Food Network star is trotted out for the next challenge. 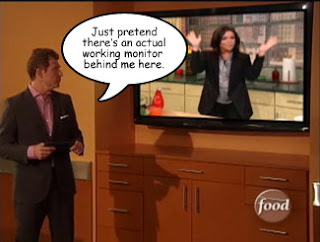 It's been a blissful seven weeks without her, but it's finally time for Rachael Ray to make an appearance. She'll be hosting the Wanna-bes on her daytime show as they give a 30 second self-intro and do a 3-minute cooking demo while answering audience questions. The task du jour is to put their own twist on a classic family dinner: Whitney - chili; Mary Beth - shepherd's pie; Jyll - meatloaf; Jeff - pork chops and apple sauce; Vic - lasagna; and Susie - chicken stir-fry.

Whitney gets to show her live-audience chops first. She does a very good intro to her imagined show, Four-Star Flair, and makes a tasty chicken chili. Despite doing a really good job, and having lots of positive energy, the judges still have to complain that she's a great teacher but not a storyteller.

Mary Beth is next, and she's really fired up. She presents Sunday Suppers with a tag line that the judges love - "wear your heart on your plate." But during her demo, she loses energy and doesn't have enough to say to fill the three minutes. Her carrot-topped shepherd's pie is both pretty and tasty though, and that gets points from the judges. 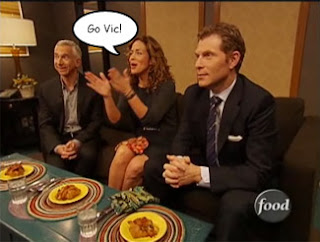 Mama's Boy Vic is next, making a Frankendish he christens the "lachanga" - leftover lasagna wrapped in a tortilla, deep fried, topped with sauce and cheese, and popped into the oven. It's overwrought, he's so busy cooking that he forgets to take an audience question (I know what I would have asked), doesn't make the point that his dish is a good way to use leftovers, and...the judges hate it. 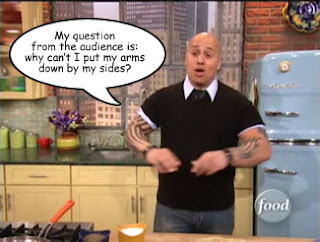 Susie is next, making what she feels is a more elegant version of fajitas, the closest thing to chicken stir-fry in her repertoire. She tells the audience that she wants them to dismiss their ideas about Mexican food. Backstage, Bride of Fogelstein thinks she's denouncing her cuisine. DUH! She's denouncing the audience's concept of Mexican food, which most likely is TACO BELL. In any case, Susie is nervous, runs out of time, and forgets to field a question. 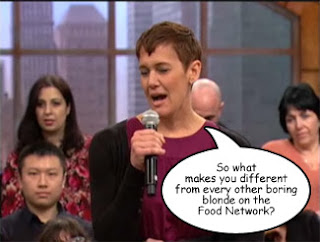 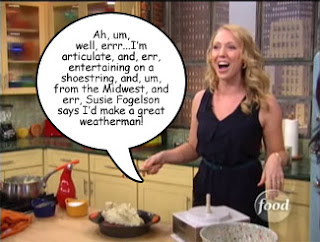 Jyll comes out and does a decent job with her intro, then makes a mess of the presentation. She's making meatloaf in a pie pan topped with mashed potatoes, which is more like a shepherd's pie than Mary Beth's shepherd's pie. The audience question throws her off and she starts babbling about giving home cooking a California twist, and entertaining on a budget and all these things that she's never mentioned before during the course of the show. 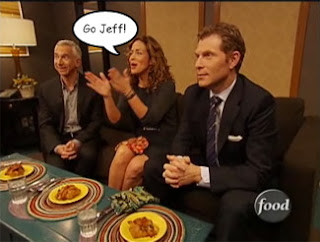 Finally, we get Jeff, who has decided he will win this challenge with his humor and energy. His intro is great, he gets the audience pumped up, and does an over-all fantastic job. Rachael Ray proclaims him to be her favorite. 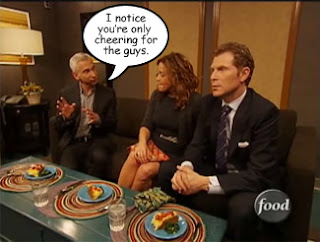 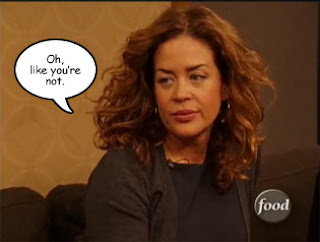 Later, in front of the Selection Committee, it's apparent that Rachael's vote was important. While Jeff didn't talk about the food as much as he should have, everybody loves both him and his pork chop sandwich. He is the winner of this challenge. 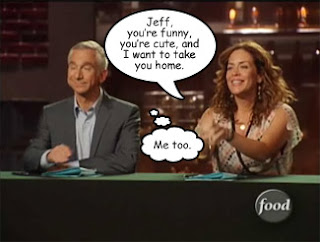 Whitney was also given high marks and is safe for another week. Meanwhile, Mary Beth, Jyll, Vic, and Susie are all on the bottom. While the Selection Committee searches for negative comments to make about everyone, it's pretty obvious that Jyll was the big stinker this week. She didn't embody her POV, came up with two new ones, and her artificiality stuck out like a sore thumb. According to the judges, that is. Honestly, I think most people on the Food Network (with notable exception of Ina, Bobby, and Alton) are big fakes.

So we're down to five Wanna-bes: Mary Beth, Jeff, Whitney, Vic, and Susie. Personally, I like all of them and would probably watch any of their shows (if they air in a time slot other than 9am on Saturday, that is). So who's your favorite?

Next week - the Wanna-bes get "roasted" by Gilbert Gottfried?