We're halfway through the season, apparently, as Bobby Flay declares this episode "Midterms." Would be nice if they just made the Wanna-bes take a written exam and take a week off the air, but alas.... 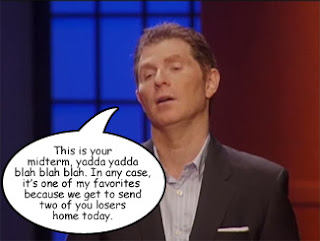 Bobby says that the Quickfire Camera Challenge is "the toughest yet," as the Wanna-bes have to prepare their "signature dish" and do a 2 minute cooking demo on camera. Each of them will also need to focus on one particular thing while they're doing the demo, even though I'd say all of them have multiple issues. 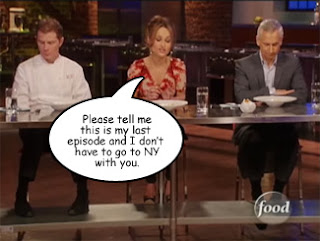 I'm not going to go through every one of them (even though there are only eight) because, predictably, most folks just don't get the job done. However, Whitney, who needed to show more personal warmth on camera, hit the nail on the head with her story about making gazpacho for her sorority sisters. Frat Boy, who usually tries to do too much, was asked by Bobby to simplify things. So of course he tries to teach "a ton of things" in two minutes. He talks and talks but ends up saying nothing. The lightbulb goes off over Tushface's head and he remarks that perhaps Frat Boy isn't mature enough for this gig. I could have told you that in week one, not that maturity is a requirement for the job. (See: Guy Fieri.) 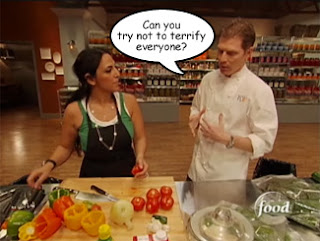 Middle Eastern Penny is told she needs to be more likable on television (I'd say in real life, too), but she doesn't quite achieve her goal. Giada tells her that if she's not having fun, she's not coming across as likable. By that standard, Penny must be having a miserable time.

At the end of the day, because basically she's the only one that nailed it, Whitney wins the challenge and a couple of advantages in the next one.

Cut to Wanna-Be Mansion where we see the contestants shooting up pool. Bobby Flay barges in to tell them that they will be hosting an over-the-top dinner party at their house, and the guest of honor will be Wolfgang Puck. After the Wanna-bes get cleaned up after pooping their pants, Bobby also tells them that they have to use ingredients already in the pantry and they've got to start cooking RIGHT NOW. 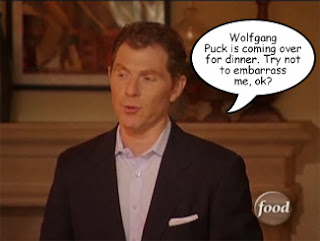 The only shopping that will be done is for decor, because Food Network needs to squeeze in a huge product placement for their sister network HGTV and one of their corporate sponsors, Target. So Mary Beth and Middle Eastern Penny get sent to Target to smile for the camera with Sabrina Soto who pushes them in the direction of her line of tableware. 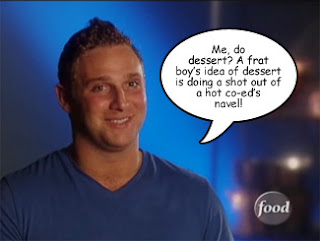 When they get back to the house, they find a Frat Boy meltdown. He's been assigned the meal's finale, which of course is dessert. He tells us he knows nothing about dessert, but decides to make a chocolate cake. Unfortunately, since Whitney has commandeered the main oven for her chicken entree, Frat Boy has to share a small warming oven with Mary Beth, who is making roasted butternut squash soup. It's a battle made in reality TV heaven as they fight over the temperature control, with Mary Beth cranking it up to 450 while Frat Boy calls "sabotage" and turns it back down to 350.

Yeah, it's that dull. And we get six more weeks of this? Please tell me it's only four weeks. 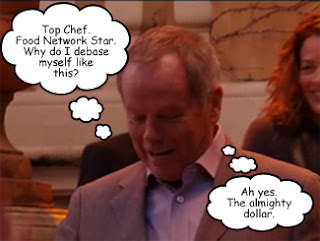 Time's up in the cramped kitchen, which is a total mess. The guests arrive and it's a damn good thing the Target Dining Room has been set up outside, because the house smells of flop sweat and frustration. Oh wait - that's my house.

Again, I'm not going to go through every course. It's not really that interesting.

Jeff the Sandwich King of Chicago serves his first course, shockingly not a sandwich. Wolfgang Puck makes a comment about it and I swear it sounds like he says something about "fart." Knowing Jeff likes to clown around, it would not be surprising if he did indeed put farts in his dish. The Selection Committee likes his presentation, fart and all, and thinks he may be a hard act to follow. 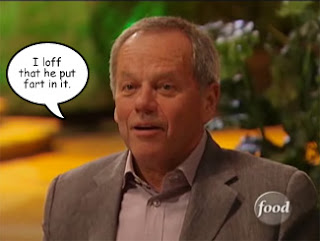 Mary Beth serves up her roasted butternut squash soup, which she loaded with cayenne pepper for "finesse." Earlier we had seen her ask Jyll to taste it for seasoning, and she, bless her robotic little heart, managed to lie convincingly. Bride of Fogelstein says that Mary Beth's presentation was more interesting than the too-spicy dish.

Meanwhile, I'm wondering when the party is going to become "over-the-top." 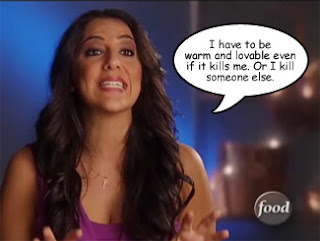 Next up was Middle Eastern Penny, who was still trying to be warm and fuzzy. Everyone enjoyed her dish, and she did seem more personable, but Tushface still isn't sure about her on-camera persona. Robot Girl Jyll is up next with her "risotto" which immediately earns her a lesson in "real" risotto from Wolfgang Puck. 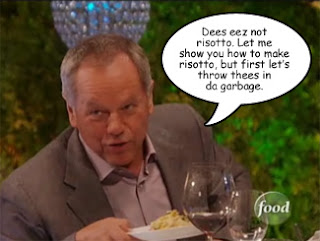 She's appropriately mortified, but hey - private cooking lesson from Wolfgang Puck! The whole scenario is so stressful and unexpected, it causes Bobby Flay to take the Lord's name in vain. 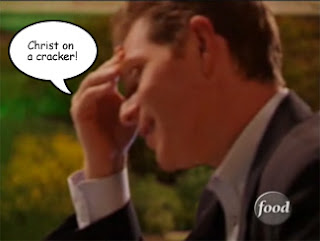 Finally, Frat Boy brings out his cake and apologizes all over the place for his lack of talent. 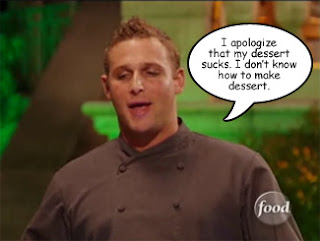 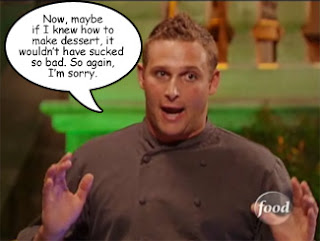 The next day, the Wanna-bes hang out in the green room, awaiting their fate. After a rehash of the high and low points, the Selection Committee tells Susie, Jeff, Whitney, and Vic that they are safe and will be going to New York to finish out the competition. 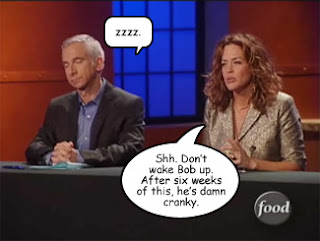 The four remaining contestants - Penny, Mary Beth, Frat Boy, and Jyll - are asked to wait in the green room yet again while the Selection Committee rehashes their bad points ad nauseum: Penny isn't warm; Mary Beth is fun to watch but maybe her food chops aren't that great; Jyll is a big phony baloney; and Frat Boy is an immature frat boy. And asinine.

The Wanna-bes come out for the verdict and Frat Boy is immediately sent packing. He claims he worked "so damn hard but it wasn't good enough" and that he's going to make something of his name. 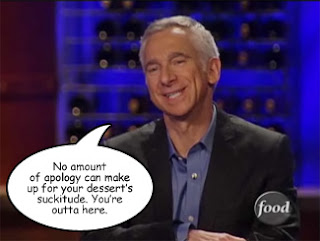 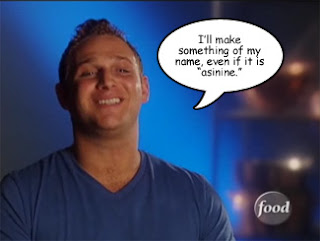 Because her soup didn't win any fans, I figured Mary Beth was out this week, but she managed to escape relatively unscathed. Amazingly, so does Robot Girl Jyll. Middle Eastern Penny and her lack of warmth becomes the second person to be sent packing this week, and it's about damn time.

So what did you think?