I thought Rocco was starting to look "normal" again last week, but while watching this week's previews, I thought he looked both both lumpy and Botoxed at the same time. And man, does he overgroom his eyebrows or what? 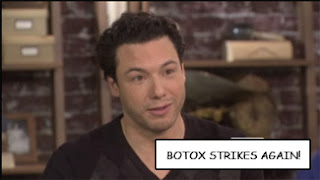 But watching the actual episode, I realized that the lumps in his cheeks come from the fact that he's clenching his teeth the whole time he's dealing with the chefpetitors. As if they pose some threat. And he scowls a lot which makes his forehead wrinkle, so if he does have Botox, it's not in the typical place.

This week's chefpetitors are executive chefs Fabio and Ryan, and the token female chef, caterer Jen, who tells us right off why she's in the competition. 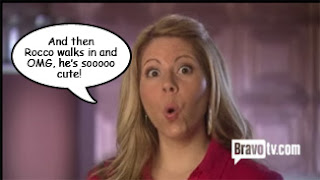 Not only that, she's engaged, and would love to start her marriage with a nice $20,000 nest egg.

Right away Rocco sends the chefpetitors off to start their Signature Dishes. Jen, who is cooking with wine, decides not to waste any of it and pours herself a glass. 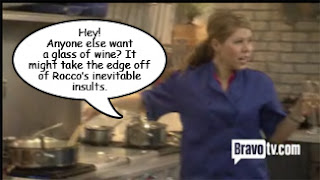 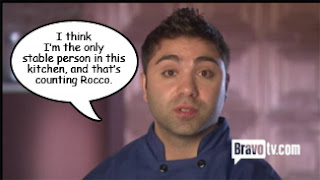 Ryan also thinks it's a good idea to drink while handling sharp knives, but Fabio (who seems a bit of a goody two-shoes) frowns at the idea. And, predictably, Rocco is not amused but he's probably dying for a shot of bourbon right around that time. You know, to take the edge off that very pointed stick he's been carrying around in his ass for the past four weeks.

They guys both think they are each other's toughest competition and discount Jen and her abilities. While it's true that she's a one-woman shitstorm in the kitchen, knocking over her bottle of wine (before she could drink it all), setting her side towel on fire, and generally making a mess, that doesn't mean she's not a good cook.

After the cooking portion of the program is over, the chefpetitors present their plates to Rocco at the Altar of Judgement. He's got the serious douche juices flowing and gives each of them the evil eye in turn. First he tastes Fabio's dish of miso-glazed Chilean sea bass, lemongrass shiitake broth, vermicelli noodles, and choy sum and from the start lets it be known that he disapproves of the dish. 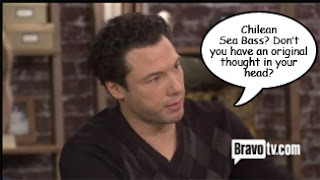 Fabio craps his pants a little before defending himself. While Rocco may be thinking he's just a typical hotel chef, he's actually got some tricks up his sleeve. (Yeah, so why not show them at this stage in the game?) Eventually Rocco tastes the fish and is forced to commend Fabio on getting the doneness and seasoning right. However, the broth is flavorless. After tasting it, Fabio sheepishly agrees.

On to Ryan, who's made deconstructed fish tacos with hamachi crudo, mango pineapple salsa, and a foam made from Corn Nuts. He says that a bite containing each of the elements should taste like a fish taco, but without the crunch of a tortilla shell. Rocco says the Corn Nut infusion is far too salty and hands out forks to all three chefs for their opinion. Ryan has to agree, Fabio seems a bit afraid to agree, and Jen goes off about being sick of pretentious food. Rocco rebukes Ryan for not tasting his dish after all the components were plated. However, he loved the fish and the lime vinaigrette, so it wasn't a complete disaster.

On to Jen, who's made a pasta dish with a tarragon tomato cream sauce and medallions of chicken. Rocco is giving her the evil eye a bit more strongly than usual and you know she's wishing she had put on that Depends before she left the house. After a taste, Rocco proclaims himself surprised...that it tastes so good. The sauce is great, the chicken is perfect. However, she made a mess out of his kitchen; should he give her the chance to make a bigger mess while concocting a 3 course meal? 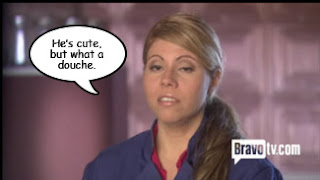 Turns out yes. After about 2 minutes of thinking, Rocco gives Fabio a pink slip for no particular reason. Then he tells the other two that this week's theme is the Perfect Summer Party. He wants each chef to create a three course meal...with a twist. Each course must come in under 350 calories and 10g of fat per serving. And to help them in their quest for good-tasting diet food, Rocco generously presents them with personally autographed copies of his latest book, Now Eat This! Diet. You know, the new one with the heavily airbrushed photo of him on the cover. 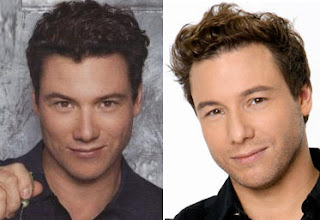 The man is going to be 45 this year, and while he still looks fairly youthful, he doesn't look like he's 30 anymore. In fact, when he was 30 he didn't look like this. And his eyes are not that big. Yeah I know his face is tilted down, but still.... Not only that, the whole platter of chicken he's holding on the cover is obviously Photoshopped. It's just a bad cover, plain and simple. But that's because nobody asked me to design it.

Anyway...back to the show. Rocco proclaims Jen the winner of the Signature Dish Challenge and tells her she gets first choice of dining rooms. Party planner Jes Forehead is then trotted out and Jen and Jes head into the Terrace Dining Room to plan. Jen wants to recreate Miami, but without the humidity, exotic animal smugglers, and drug dealers. Ryan wants the Intimate Dining Room converted into a beach cabana, with shells, sand, and surfboards.

The next day, the chefpetitors get to cooking. Ryan tells us he's making scallops with a tomato watermelon salad, black cod with edamame puree and cucumber salad, and a parfait of Greek yogurt and balsamic strawberries for dessert. Jen is also making scallops with a tequila sauce and avocado mousse, BBQ pork tenderloin with rice and black beans, and a passionfruit mousse trifle with fresh berries. Right off the bat it sounds like Ryan's dishes will definitely have fewer than 350 calories per serving, but I'm not so sure about Jen's. 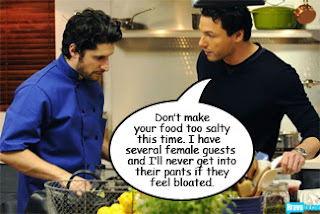 Rocco comes in to visit the chefs in the kitchen. Jen is making sure to taste her food at every stage and rubs it in Ryan's face. Rocco is loving that.

Then the guests arrive, and they are generally a bunch of boring nobodies. None of them is a Bravolebrity. Yet. We have actor Chazz Palminteri, the only person anyone's ever heard of and that's only barely. Then there's Betty Wong from Fitness magazine, model Damaris Lewis, personal trainer Joe Dowdell, NY party planner Jung Lee, and comedian Jeffrey Ross. Rocco tells his guests that they will be eating low-cal food and Ross says, "hey, I don't eat that crap!" So Rocco takes him into the kitchen to make special requests. Jeff says he'd love some chicken salad, pot roast, matzo brei with salami, and cheesecake. Rocco then tells the chefs that they have to cook something special for Jeff, but it still has to fall under 350 calories per serving. 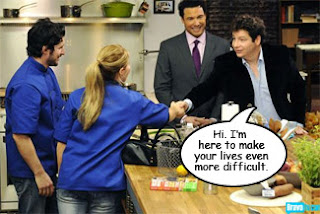 Ryan decides he's taking the chicken salad, because it's easy. Jen is open to challenges and takes the matzo brei, which she's pretty sure contains eggs, but that's all she knows. 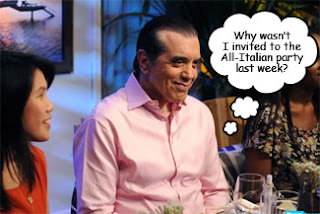 Ryan serves first. The first course of scallops goes very well, and Jeff the troublemaker loves his chicken salad, which is made with yogurt. Then Jeff says that he doesn't like fish, so Rocco goes back to the kitchen to tell Ryan to make him something else. Ryan's black cod dish gets mixed reactions and his dessert doesn't seem to impress anyone.

Jen is next. The guests really seem to love her Miami-themed room and even I have to admit it's pretty cool. Back in the kitchen, Jen is flustered and even more so when she tastes her scallops and decides they are more like "shoe rubber" than seafood. She swaps out shrimp instead, which takes a bit longer to cook. Rocco is once more in the kitchen wondering about the hold-up. He admonishes Jen to get the next course out faster, at which point she wants to jump on him and rip his throat out but manages a meek, "ok." In the meantime, she's even further in the weeds and recruits one of her servers to help plate the food while she verbally abuses him. 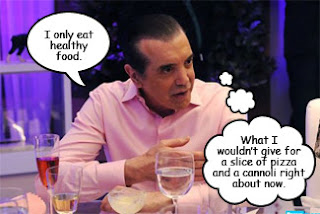 Back out in the dining room, the guests are having the most boring conversation ever. It's the kind of party where I'd probably drink too much wine and fall asleep, just to escape. Chazz Palminteri (who looks like an old-fashioned horror movie creature) is telling the fitness gurus and models that his body is a temple and he only eats food that is good for him. So why, pray tell, has he opened a restaurant serving pizza and pasta laden with fatty pork products like guanciale and speck, and fattening cheeses? Because he knows nobody wants to pay $27 for the equivalent of a Lean Cuisine. Smart man. (Oh, and a review of said restaurant, Chazz: A Bronx Original, will be forthcoming.)

Everyone loves the matzo brei. By Jen's reckoning, it's a giant omelette with matzo in it, but it's a hit nonetheless. Her pork tenderloin is perfectly cooked, but some guests think the sauce is like fancy ketchup. Finally her dessert comes out and is called "baby food" by one guest, but enjoyed by the rest.

At the end of Jen's dinner, Rocco goes into the kitchen to call out his winner. Much to Ryan's chagrin, it's Jen, who served up some good food, and particularly that matzo brei. 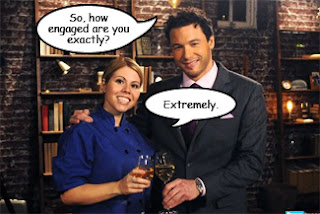 Finally we have a female winner! Go Jen!

Next week: Oh, I have no idea. The television got turned off as soon as the winner was announced. You'll just have to go to Alltopchef.com for previews.