Gluten and I do not have a good relationship. I don't have any sensitivity to the stuff :::knocking on wood::: but I do seem to fight with it when I am handling a yeast-raised dough. I have never been a fan of wrestling, professional or otherwise, and would much rather have Mr Gluten surrender to my whims. Oh, he's under control when I bake bread, since I use the fabulous no-knead technique found in Artisan Bread in Five Minutes a Day, but he still gives me a fit when I attempt pizza. Most of the time, I'll use a ready-made crust such as Mama Mary's (but never Boboli - yuck) or a flatbread, but once in a rare while, while feeling feisty, I'll buy a blob of pizza dough from Trader Joe's and then the fighting begins anew. An attempt to stretch it into a circle causes it to bounce right back. Sneaking up on the dough after letting it rest a few minutes doesn't work, either - Mr Gluten isn't stupid. The next time I want pizza, I find myself cozying back up with the much more-friendly Mama Mary.

Despite my comfortable relationship with Mama, it's pure stubbornness that makes me want to try again with Mr Gluten. The next time I had the urge to make home-made pizza, I made the dough completely from scratch, using a recipe from my favorite bread book. For some reason, this home-made dough was much more willing to acquiesce to my will and seemed positively happy to be manipulated into a baking-sheet sized rectangle. 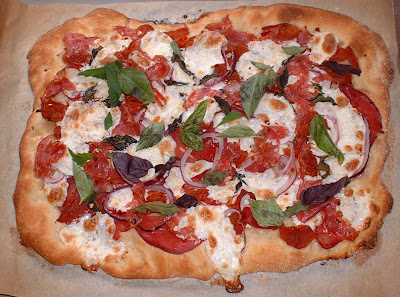 Thus tamed, the beast was topped with some leftover Italian cold cuts (bresaola and sopressata) sundried tomatoes that had been rehydrated and roughly chopped, red onion, fresh mozzarella, and several varieties of basil from the garden. After spending around 20 minutes in a 475F oven, the resulting crust was thin and crisp, but not cracker-y, and the cornicione (crust edge), while not obviously bubbled, was hollow in areas, making for extra crunch. 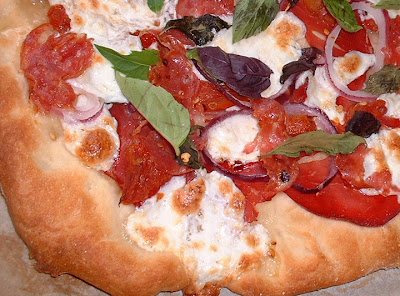 My ideal pizza has a softer bottom crust that is fold-able, yet still crisp (a la New York style), but this one was pretty damn good. And obedient. The only issue with making pizza from a wet dough recipe is that I need to think ahead and make the dough the day before. But since a batch can last in the fridge for well over a week, I already have dough waiting for my next pizza urge.