The Return of Gino's 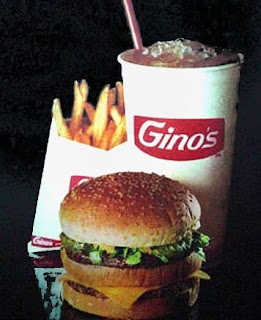 Who besides me has fond memories of going to Gino's? For those who don't remember, Gino's was a fast-food restaurant founded in Baltimore in 1957 by Colts players Gino Marchetti and Alan Ameche. Originally a drive-thru, Gino's introduced inside dining in 1969. Eventually the chain expanded to over 500 restaurants in the mid-Atlantic region. In the early 80s, the chain was purchased by Marriott, who transformed them into Roy Rogers restaurants. And now they're gone forever. Or are they?

I always preferred going to Gino's over McDonald's not only because I thought the burgers tasted better, but also Gino's was the home of Kentucky Fried Chicken. It was nice to have the option of burger or chicken when the family went out for a quick meal. And back then, KFC was pretty much the only game in town when it came to crispy poultry parts, other than grandma's cast iron skillet. 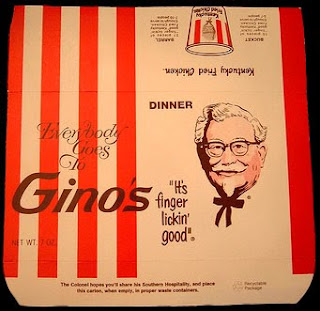 After nearly 30 years of life without Gino's, the restaurant is attempting to make a comeback. Burger joints are the new bagel shop or coffee bar; even celebrity chefs are getting into the act. Hubert Keller, Bobby Flay, Richard Blais, and Spike Mendelsohn all have specialty burger restaurants. So why not ride the wave and bring back an old regional favorite, this time as a fast-casual (e.g. Five Guys, Chipotle) sort of place rather than trying to compete with fast food juggernauts like McDonald's and Burger King.
While I think it's probably pretty easy to make a good burger, I wonder if they'll be able to produce chicken as good as KFC. I, for one, look forward to finding out.

The new endeavor hopes to open its first restaurant sometime in 2010. Read more about it at their Web site, http://ginosgiant.com.
And for nostalgia's sake, click here to listen to a jingle from 1969.
Posted by theminx

If they can resurrect the Gino's Giant and make it as tasty as it originally was, I'm there! When I was married we lived in Catonsville (late 70s), and there was a Gino's on Frederick Road, right in the heart of the little shopping district. It's a MacDonald's now. I used to stop there regularly for a Giant & a Coke. Those were the days...

I forgot to enter my name on my previous comment. That was me. :o)

I'd never heard of Gino's, but I'm all about the yum that is KFC.

I used to eat at the one in Annandale, VA. Pretty good - I'd like to see it come back, not that I eat fast food anymore but I know lots of people who would love it.

There was a Gino's right down the street from my house in Hamilton. I can't remember ever eating there but folks I grew up with still use that as a landmark...as in, go past the old Gino's...

When the return of Gino's was announced, the Philadelphia area was mentioned as the venue. Now Maryland has gotten into the fray. Will the first Gino's open in Towson or NE Philadelphia. The race is on!