Jajangmyeon is a noodle dish that we Minxes discovered at our favorite Korean restaurant, Purim Oak (now closed). It's a Koreanization of a Chinese dish, zha jiang mien, kind of a Chinese Bolognese, if you will. We bought the central ingredient - black bean paste - a while back and had opened it to make this amazing black bbq sauce recipe. Now it was time to use it for jajangmyeon.
I used a variation on this recipe, mixing the sauce into the noodles rather than topping them because that's the way we had eaten it at Purim Oak. And instead of using "minced" meat, I cooked up some pork belly. 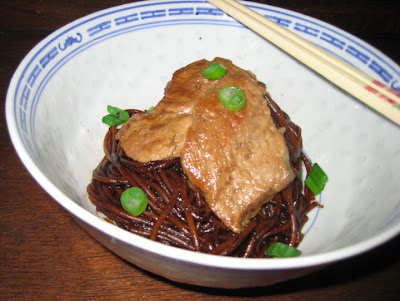 The pork belly was sadly too lean and the meat came out a bit dry, even after a long slow 3-hour braise. The overall dish was pretty good, although not as good as I remembered.
It never is, is it?
Posted by theminx